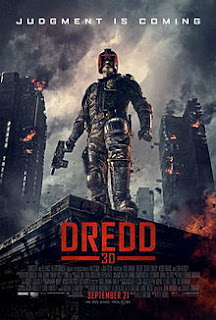 Synopsis taken from IMDb
The future America is an irradiated wast land. On it's East Coast, running from Boston to Washington DC, lies Mega City One- a vast, violent metropolis where criminals rule the chaotic streets. The only force of order lies with the urban cops called "Judges" who possess the combined powers of  judge, jury and instant executioner.  Known and feared throughout the city, Dredd is the ultimate judge, challenged with ridding the city of its latest scourge- a dangerous drug epidemic that has users of "Slo-Mo" experiencing reality at a fraction of its normal speed. During a routine day on the job, Dredd is assigned to train and evaluate Cassandra Anderson, a rookie with psychic abilities thanks to a genetic mutation. A heinous crime calls them to a neighborhood where fellow judges rarely dare to venture- a 200 story vertical slum controlled by prostitute turned drug lord Ma-Ma and her ruthless clan.

This is a film I've wanted to see since I first saw the trailer for it. To me, it looked fun, action-packed and violent as hell. So I was stoked to see how this movie would turn out. However, I didn't get to see it opening weekend due to being overbooked, so I had to miss out on seeing it opening weekend. So you can imagine my surprise to find out that this movie bombed at the box office! I guess I was alone in thinking this movie looked like a great time.

Despite the film coming in 6th place opening weekend and only grossing around 6 million dollars, I was still eager to see it. I don't let what critics or grossing's judge movies for me, I listen to what's being said about the film but I never let someone else's opinion become the reason for not seeing a movie. So I made a plan to see it this past Sunday with some of my close friends so that after Dredd was over we could still make it for the Dexter season 7 premiere after. It was a good Sunday. 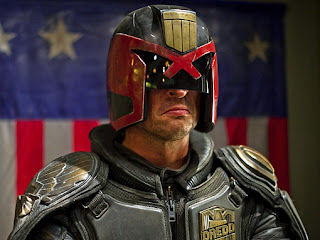 Wanna know what else made my Sunday even better? Dredd 3D was awesome! The movie didn't let me and my friends down one bit, regardless of it's doings a the box office we loved it and were completely satisfied. Karl Urban played a mean Judge Dredd. The casting was spot on, I liked all the characters and the people who played them.

Lena Headey, who I think is a beautiful talented actress was made hideous for her role in this film, bearing rotten teeth from drugs and a nasty deep scar running under her right eye across the cheek. However, this made me love her role even more! Because she's not relying on her beauty to make the part, she has to show true acting in this role, all beauty stripped away. It also shows the parts she's willing to play and I love her for that. Terminator: The Sarah Connor Chronicles, 300 and Dredd 3D. Lena's definitely my kind of actress. 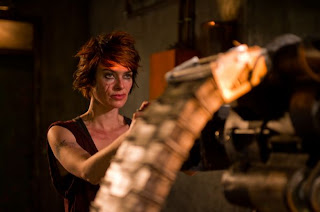 I also loved Cassandra Anderson's character. She was a rookie only used to using her psychic powers and is thrown into a situation where she has to fight for her life and watch people be killed in front of her. You see the look of shock on her face and the doubts of if she chose the right career. But sooner or later she's gotta either kill or be killed. 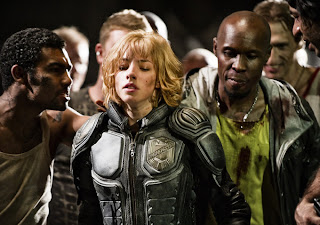 The gore in this movie was spectacular! It was like The Punisher: War Zone, only this movie was ten times better. The violence was off the chart, and the best part was it was in 3D. I think my new favorite thing in life may be watching people kick some ass in 3D. Making Dredd a 3D movie was definitely a good call. I don't usually go for 3D movies, but this one was worth it.

Dredd punishes his victims, he has no problem pulling the trigger. He sees straight and narrow, you're either right or wrong. If you're a criminal you should watch you back. You may end up with a bullet through your face... 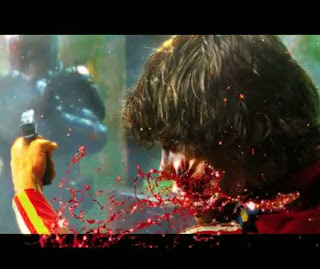 The movie is packed with total action and it's unbelievably awesome. It's just alot of hell being raised and people being killed. This movie is a thrill ride. It even has a pretty good twist to it that I personally, didn't see coming. He's constantly put in impossible situations and it makes for a great, entertaining movie. 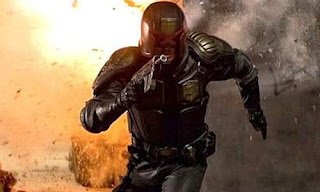 The one thing bad that I have to say about this movie is that it's totally a 3D movie. It was made for that. The action scenes, the scenery and the effects. Even the filming sets were made for 3D. So if you don't want to see it in 3D your opinion is probably not going to be as enthusiastic as mine. Go see it in 3D.

This movie was everything I was expecting and I can't wait for the Blu-Ray to be released to watch all of the bonus material. Even though I've never read the Dark Horse comic series I'm now considering it if they're half as good as the movie. I hope they follow through and do a sequel to this film despite it's box office charm-or lack there of.