Synopsis taken from IMDb
A small West Virginia town is hosting the legendary Mountain Man Festival on Halloween, where throngs of costumed party goers gather for a wild night of music and mischief. But an inbred family of hillbilly cannibals kill the fun when they trick and treat themselves to a group of visiting college students.

I was fortunate enough to get to see this film at an advanced screening, for those of you who are itching to see it you won't have to wait long. It hits Blue-ray and DVD this Tuesday, October 23rd.

Although the Wrong Turn movies have digressed I still haven't been able to pull myself away. I've seen all of these films.

This film starts off bloody and brutal, what we have come to expect for the opening credits of this series. We see an ax used to dismember a passerby. The opening scenes to these movies are for pure shock value, to show you that they don't hold back and that they're gory and over-the-top.

The group of friends this film revolves around are heading to the festival and carrying alot of drugs, planning to party hard. While talking and distracted the driver has to swerve to avoid hitting a pedestrian and wrecks his fathers vehicle. When going to check on the man they may or may not have hit during the chaos the man stabs one of them in the arm. In retaliation the group of boys start kicking the hell out of the man just in time for the sheriff to pull up and see the beating happening. This gets the gang of friends and the weird pedestrian a night in jail. 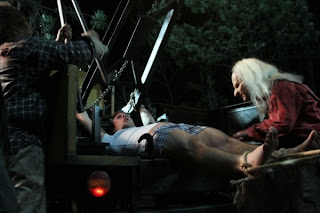 It was awesome to see Doug Bradley in this film playing the pedestrian, Maynard, and father of the 3 hillbilly's. For those of you less informed,  Doug Bradley is most commonly known as Pinhead from the Hellraiser franchise created by the legendary Clive Barker.

While in jail Maynard makes everyone on edge by telling everyone including the sheriff that they've made a mistake and that they're going to pay. He's very arrogant and this scene reminds me very much of the jail scene from 30 Days Of Night (2007). Playing mind games, getting into the heads of everyone and getting off on it. Knowing something sinister is on it's way.

Amidst the jail scenes One Eye, Three Finger and Saw Tooth are wreaking havoc, slaying festival goers in barbarous ways, sparring no gore on their way to get Maynard out of jail.

But the sheriff is left alone to deal with the all the calamity because all of her officers are at the festival making sure things don't get out of hand. Can she hold off the hell that's coming down on her? 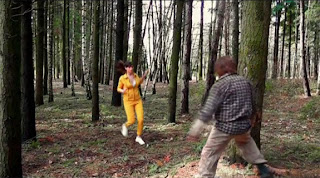 I am a fan of the original Wrong Turn (2003), it isn't a staple in the horror genre or anything of the sort, but it's a good, enjoyable horror film full of gore and chills. As this series moves on it strays less and less from the standard set by the first film, becoming tongue-in-cheek and senseless slaughter films.

That used to bother me. I remember when the 2nd Wrong Turn hit video how disappointed I was in it. I couldn't believe how far the ball had dropped. After that I said I'm done with the series and have no interest anymore if that's what they've become. Then some time later, I was over a friends house having a few laughs and he told me he just purchased Wrong Turn 3: Left for Dead (2009) and asked if I wanted to watch it. We talked and chatted about our opinions of the films and decided we had nothing to lose, so we watched it.

Then a few months ago when I was rearranging my Netflix queue I decided to put Wrong Turn 4: Bloody Beginnings (2011) on it. So when it arrived I watched it. That's when I realized that despite my dislike of the sequels, I still keep watching them. 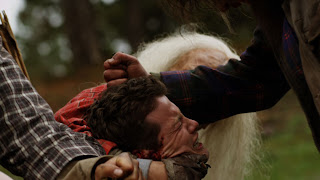 Then I kind of had a revelation and said that regardless of how more superior the original film was, that these sequels are still appealing to me. They're fun movies. They're the type of movies you watch for the gross out factor and to see the hardcore death scenes, as well as laugh at the bad acting and cheese. These films don't hide that though, and that's what piqued my mind and turned my opinion around on them. I'm not saying they're great movies or solid horror films, I'm saying they sure as hell aren't the worst horror films you'll ever see and they're amusing. They're a shell of their predecessor but they're here, like it or not, and they're probably aren't going anywhere for a while. 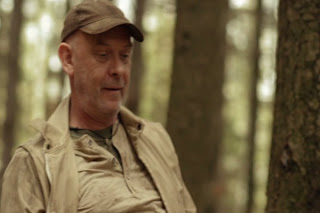 If you watch them expecting serious horror films or if you're trying to compare them to the original don't hold your breath.

For those of us who've come to understand what to expect of these movies, you'll like this 5th installment. For those of you who don't like these films, you shouldn't bother.

Although these films are low budget and senseless predictable gore fests, the story for this one is still considered weak to me. It's a simple story and it's all about dialog and kills. Not that the other films didn't suffer from the same things, but this film seems to have even less effort put into it. There are some awesome deaths though, and it's got laughs and some turn your head moments. The things these movies are known for.

I guess you could say this is probably the least best film in the series but I still found it amusing.