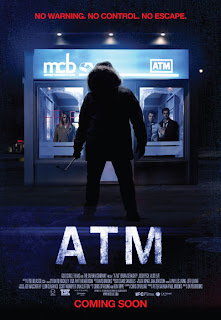 Synopsis taken from IMDb
On a late night visit to an ATM, three co-workers end up in a desperate fight for their lives when they become trapped by an unknown man.

Let me start off by saying how weird it is seeing Josh from the Nickelodeon hit series Drake & Josh in a movie like this. Total opposite of what he's usually doing. I suppose this is his way of trying to be taken as a serious actor and good for him.

ATM was one of those movies that seem to find you instead of you finding the movie. I first came onto this movie when I was using the nearest Redbox machine and I passed on it. But it seems like I started seeing the movie everywhere and a friend even asked me if I've seen it. So I used my free rental and picked it up. What's the worst that could happen? I got it for free!

I liked the vibes I was getting from the start of this movie, it had a chilling atmosphere where you could feel something just under the surface. The music seemed good and was setting the mood right. I was already beginning to get high hopes for it.

There was alot of character development in this movie, which I loved because whenever you have alot of character development it makes you feel for the characters and makes the movie all around more believable. Corey (Josh Peck) and David (Brian Geraghty) had good screen chemistry and were convincing as well as Emily (Alice Eve) who is David's love interest. They made a good trio. Nothing overly impressive but this group did a good job. 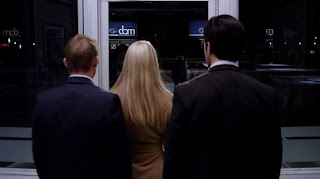 On their way home from a party Corey interferes with David's attempt at hooking up with Emily due to being drunk. On the way home he insists they stop at an ATM so he can withdraw some money to get food. Here's where the movie picked up.

The whole time Corey is in the ATM David and Emily stay in the car to chat. When Corey starts taking to long David and Emily go into the ATM to see what the hold up is. On their way out of the ATM is where the problem lies...

I thought the suspense was great. The killer is very mysterious, keeping you guessing who it is and why they won't let them leave. It could be anybody. A robber, a killer, a rapist or an escaped mental patient. He just stands there and watches them. Very psychological.

After watching the movie I gotta say that I didn't like the killer or his scheme, but after it sat with me for a few hours I came around. I think this villain is a good choice. 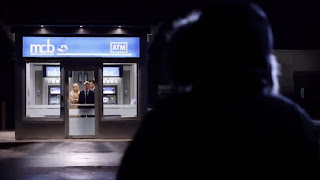 We see even more character development when the trio is forced into "survival mode" and it's a nice addition to the movie. Making you see how real and grounded this trio is and how they act in desperate measures.

As if problems aren't bad enough the trio realizes they have to leave the ATM or else they're going to freeze due to the weather dropping. 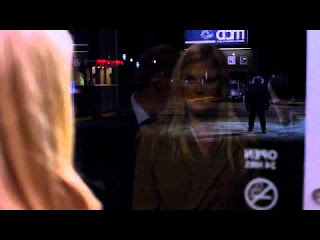 Towards the very end there is a jaw-dropping scene of something wickedly unexpected happening that I loved. It made the characters more vulnerable and I liked that touch. The ending disappointed me because I saw it coming from about half way through the film. To see this film become predictable was hurtful.

I thought the film could have had a better ending for sure, and as much as I give the actors credit for acting their butts off I gotta admit that there were points here and there where the acting suffered. The idea of the film was creative and original, which is why I took to it so much. 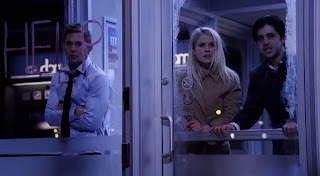 This movie didn't try to be hip which I give it credit for, it was a straight shooting horror film. And it definitely makes you think twice before using a ATM a night. You never know who's out there.

It wasn't a perfect movie but it was pretty damn entertaining watching this trio fight for their lives. I'm a fan of this movie and I think it's a nice addition to the better horror films of 2012.