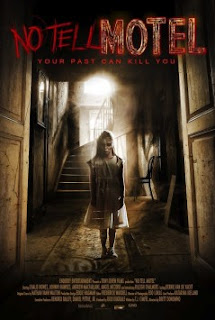 Synopsis taken from IMDb
Stranded in the middle of nowhere, Megan Walsh and her friends are forced to spend the night in an abandoned roadside hotel. Little do they know the crumbling structure is haunted by the spirit of a vengeful little ghost named Angela. As the haunting turns violent and the group's numbers dwindle, Megan realizes that the key to her survival lies in uncovering the secrets of the motel's tortured past. And even that might not be enough to save her.

I was at a Redbox a few weeks ago and saw this movie. Nothing stood out to me about it, I thought the cover looked generic and overdone and I thought the film title was cheap. But for some reason, maybe I'm a glutton for punishment, I rented the movie.

This film starts off with a little girl named Angela (Rileigh Chalmers) and she's left unattended by her parents. She soon meets her demise when she's in the road and gets hit by a car and killed. 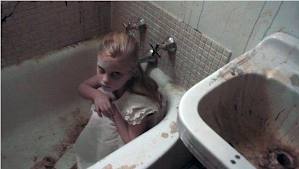 Now in present day, Megan (Chalie Howes) and her friends are traveling and under dire circumstances are forced into staying at an old abandoned hotel. Slowly they start to catch on that the hotel isn't just some ratty, harmless broken down building. It's creepy and haunted by the spirit of Angela.

Megan and her friends are mystified by a newcomer to the group. He knows a lot about Angela and her deranged family and he fills them all in on the details. 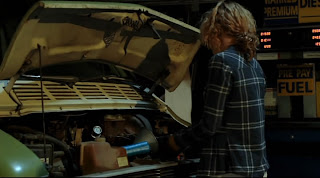 The haunting's become hostile and Megan's friends start to die off one by one with gory fashion, the kills are so typical it may actually make you roll your eyes.

The effects in this movie are so weak and cheaply done that it comes off as a low budget Syfy channel movie. It's really hard to take this movie seriously. The only people I see this movie scaring is people new to the genre, otherwise the movies obsolete and pointless. Just another cheap horror film to slip through the cracks and gone forever.

This film isn't scary at all and it's even less suspenseful. The plot is so common and simple for ghost stories, I've seen several horror with the same story but I can't tell you their names because I forgot them, they aren't worth remembering. Here's another to add to that list. 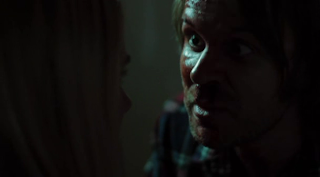 The makeup is deplorable, looks like a trick or treater, not a ghost and not intimidating or menacing.

I don't think the actors put a bit of effort into their roles and it showed. There wasn't a character you really like or don't like. They're not likable characters and their poorly portrayed. 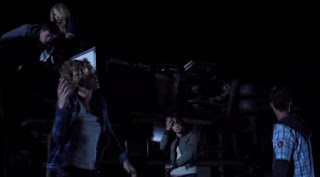 On the other hand, I'll compliment this movie because it isn't the worst film I've seen or even close to it. It's also pretty good amongst some of the others I've seen. It's just a poorly made movie that didn't require any originality or creativity. This was one of those movies that was typical to most horror films, but for some reason they thought it would be better than the typical standard and they were wrong.

Not too many good things to say about this movie. It's totally forgettable.