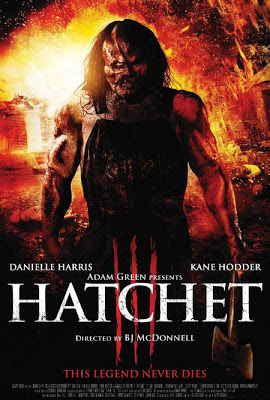 Synopsis taken from IMDb
A search and recovery team heads into the haunted swamp to pick up the pieces and Marybeth learns the secret to ending the voodoo curse that has left Victor Crowley haunting and terrorizing Honey Island Swamp for decades.


For this film, Hatchet creator, Adam Green stepped away from the director's chair, and gave it to the credible BJ McDonnell, who did camera work on the previous Hatchet film. This is BJ's directorial debut, although he's been involved in film since 2001. Usually he's the dolly grip, or Steadicam operator. Recently, he's done work on "The Collection" and "The Walking Dead", he was also involved with "Abraham Lincoln: Vampire Hunter".

It seems everywhere I go, I read internet hate for the 2nd film, but I couldn't disagree more. I loved both installments in the series and couldn't wait for this one! "Hatchet 3" picks up exactly where the last film left off, continuing the story. It focuses more on the legend of Victor Crowley, and how to put him to rest for good. I think the fact that they're still going into Victor's background and story is what I liked most about this film. There's still a story to be told, as opposed to just filming kills and gore. 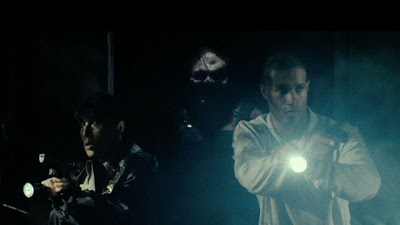 We get introduced to a lot of new characters this time around, much like the previous films, one of them being Derek Mears (Friday the 13th 2009). He plays Hawes, head of Louisiana's SWAT team. Being a horror fanboy, it was awesome seeing both he and Hodder on screen together. Old school, and new school Jason Voorhees in the same movie is great. Caroline Williams, also stars in this film as Amanda. I think it was most thrilling for me to see Zach Galligan, who played Billy in "Gremlins".

After the chaos of the last film, Marybeth (Danielle Harris) finds herself in jail, and accused of the mass murder. Amanda, being a local nobody who's tried to make a name for herself by proving Victor Crowley is real, tells Marybeth that she knows how to kill Crowley once and for all...

This film tends to not be as cheesy as the first two but, it's just as gory and brutal. I love how they're still coming up with atrocious, creative kills for these films. It keeps you watching and is part of the fun you have while watching this series. There's some moments that'll cause you laugh aloud, and there's some jumps. Mostly, like the other films, you're just eager to see Victor, and what he's up to!

All of the cast do a great job at making this movie work. It's scary, yet by dialog and actions, we're always reminded that this film doesn't take itself too seriously. This whole series is an enormously fun roller coaster ride for fans of old school horror films. 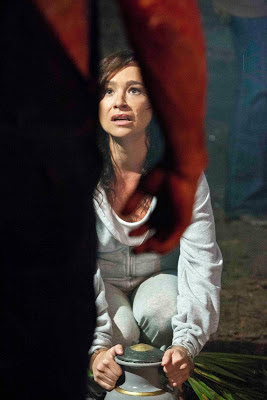 The film lacks suspense, but has plenty of quick jump moments that'll get a reaction out of you. I tend to not try and over praise films, but slashers have always been my favorite films. I can't help but be a fan and love these movies!

As the film concluded, I was completely satisfied. Had I been in a theater I would have stood up and clapped. Hell, I almost did it from the couch (laugh). Danielle Harris is the best she's ever been, and I can't wait to see the 4th film. I hope it happens soon, but I'm estimating it'll be another 3 years, that tends to be the gap between the films.

"Hatchet III" leaves you wanting more immediately, and by the looks of it, the 4th movie will likely pickup exactly where this one leaves off.