Berberian Sound Studio will trip you out! 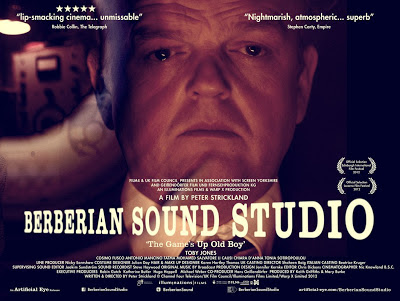 
Going into this film, I heard a lot of good things and nothing really negative. I've heard that it's like an acid trip, and that it's like a Stanley Kubrick film, reminiscent of "The Shining". My suspicions were very high on this one. I love atmospheric horror films, and that slow, dreadful feeling you get when watching them. So I was game from the start and ready to see what this film offered.

After seeing this film two days ago, I'm still mulling it over in my head. I'm still absorbing it, taking it all in. This is a movie I'm going to need to re-watch a few times, to make sure I've gotten it all. It left me with so many questions. It's very vague and confusing. Some don't like this type of horror, but I like any and all kinds. I like the way this movie was made, it's very artsy and classy for a horror film. 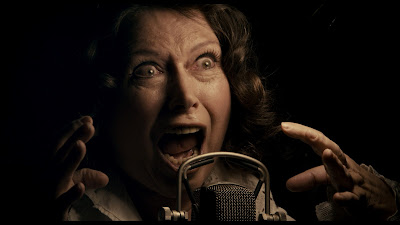 Toby Jones (The Mist) does a great job as the lead in this film. His character Gilderoy is well played and portrayed. The films starts off a little slow, and I wasn't sure what was coming. But as the film built up more and more, we started to see the effect the music compositions are having on Gilderoy. It becomes a game of what's real and what isn't. It's a very effective and unsettling film.

The music and sounds going on in this film give you that annoyed, creepy feeling that comes along with watching the original 1974 "Texas Chainsaw Massacre". People claim that the noises are what makes the classic film so scary, and the same goes for "Berberian Sound Studio". It's a great film for those of us who don't want, or need every little detail explained to us. This is for those of us who like a little mystery in our horror.

"Berberian Sound Studio" is original, well acted, and well written. It's a horror film for the true horror fan. The fans who adore films from the 70's and even 80's. This isn't a torture movie, it isn't a gore movie. It's a pure horror film, that is borderline a psychological thriller. As a matter of fact, some may even genre it as a thriller. But to me, it's definitely a horror film. 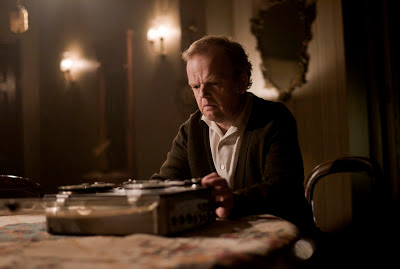 As the film concluded, it became more intense and I started to understand it a bit more. Then it added more mystery and left me guessing. As I mentioned before, I'm going to be giving this a second viewing. I just want to let everything sink in a little more. But even after the first viewing, I can tell you that I'm a fan. I just want to make sure that I understand it as best I can.

Much like "Kill List", I loved the mystery aspect of  the film and not knowing what just happened. A film that makes you think is a well written film, most of the time. I don't give films thumbs up, that's for other critics, but if I did give thumbs up, I would give this film two thumbs raised high. It's great to see another refreshingly original horror film to come out. Horror is doing all sorts of great things right now, if you just look beneath the surface...