Would Your Rather shows that we all have a price 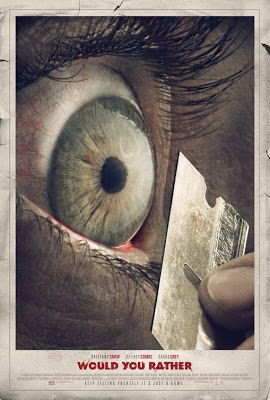 Synopsis taken from IMDb
Desperate to help her ailing brother, a young woman unknowingly agrees to compete in a deadly game of "Would You Rather", hosted by a sadistic aristocrat.


This is by far Jeffrey Combs' best films since 1985's "Re-Animator". And this is also his best performance to date! All I had to hear was that he was in it and I was sold. Then I started reading up on this film and I got more and more intrigued to watch it. It's not what I was expecting at all...it was much, much better.

"Would You Rather" is a modern day "House on Haunted Hill", it's very similar, but more demented and twisted. What struck me, is that it has class to it. It's brutal, it's suspenseful, but yet it manages to not become a gore flick. It's based around a lot of dialog, making everyone really act.

Shepard Lambrick (Combs) is a very wealthy man, and he gets off on devaluing people and watching them crumble. He's cold and heartless. But, he's rich, and willing to pay you for your endurance. Combs plays a very serious and dark role and he nor the movie, have any cheesiness to them what so ever. Neither do any of the other characters. This is a very serious film, it's not light hearted.

Lambrick hosts a game where he invites guests to participate guaranteeing whoever wins, gets a huge payout. He chooses his guests based upon how financially stressed they are. He knows people will do almost anything for money, and counts on it.

After a nice dinner, the games begin. No one expected it to be as extreme of a game as it is, they had no idea what they agreed to. As they all sit around the dinner table, they're forced to take turns choosing on if they torture themselves, or the person sitting next to them. It becomes clear that the game is about eliminating contenders, survival of the fittest. They're forced to do a wide array of simple, but effectful and painful tortures to themselves and one another. What works about it, is that they're all real people with real problems that we can all relate to. 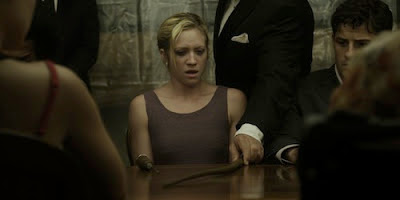 Even though the camera shows the tortures going back and forth, it's never shot in montage form, it's all done in real time. The best thing, is that it never gets boring! You'd think it would, but the whole film is entertaining. And that's because it's got well written characters and a really good cast.

Brittany Snow plays Iris, a young woman taking care of her ill brother. She's overwhelmed with bills, and doesn't have a life due to dedicating all of her time to her brother. She instantly becomes a favorite to Lambrick, because he can sense how broke she is. Seeing Brittany's performance really sets the movie off! She's so sympathetic and pure, that you back her from the start.

As the film concluded, I was instantly inclined to watch it again. It's such a good movie, and not a lot of people know about it, which is a shame. If you get the chance, check it out. It's brilliant. And I love the lack of blood shown in the film. Doesn't have to be gory to be good.