Inbred is a brutal and bloody blast! 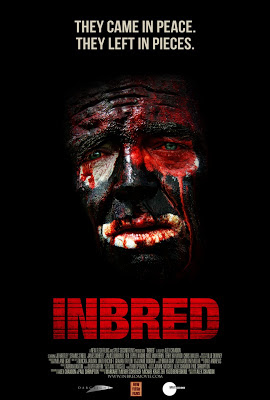 Synopsis taken from IMDb
Four young offenders and their workers spend a weekend in the remote Yorkshire village of Mortlake, which prides on keeping itself to itself. A minor incident with locals rapidly escalates into a blood-soaked, deliriously warped nightmare.


I heard a lot of good things going into this British horror film. Just the title says enough. You know what you're getting into with a movie named "Inbred". I knew the reputation this film had, so I was anxious and eager to view this one.

The film starts off a little dry and silly, and I didn't know what to expect. I didn't know if it was going to go a ridiculous route and just be funny or, if there would be a decent balance. As it turns out, the humor works great! Even though this is a very dark film, it's still amusing and packs a lot of dark humor. 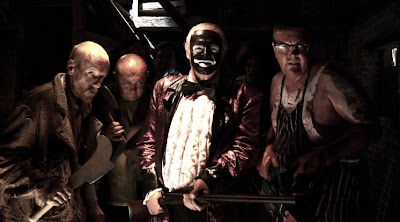 The deaths in this film are absolutely horrendous and brutal. I'm still replaying the horse scene in my head, and I saw the film a few days ago. There's a lot of gore and blood in this one. It's a weird balance of a hardcore horror film, and a comedy. I was shocked by how brutal it is! The special effects were fantastic!

Once the first 30 minutes or so have passed and the film picks up, I wasn't ready for how serious it was about to get. I was thrilled and pleasantly surprised. It kept me watching, I didn't even want to send a text through it. I love how it's still funny no matter how hardcore it gets. Once everyone's seen this, I think this is going to be one that everyone brings up when their engaged in a conversation about brutal horror films.

There's a good vibe flowing from this film, and after watching it I couldn't stop talking about it. It's refreshing seeing all these new original horror films come out as of late. It puts a smile on my face. Especially when everybody loves to throw around that horror is dead, but that's clearly overly dramatic and very false. If you look, there's been a good lump of horror films that have come out over the past few years. People just tend to want to focus in on the bad ones and magnify how poor it is. Clearly some of these so-called horror fans have been missing out on a lot.

"Inbred" is just a fun film to watch. There's some moments that'll make you close your eyes or turn your head, and there are parts that'll get a loud reaction out of you. And there's plenty of laughs to go all around! The comedic spin takes the edge off of how screwed up this film is, and how gruesome it can be.

I almost have nothing but praise for this film. Aside from some poor acting done by some of the minor cast, I don't really have anything bad to say. It's a completely solid horror film and it's a blast to watch.

Another thing that works for the film is that it isn't predictable. Well, some of it is predictable, but there's a good amount of things that took me by surprise. It's part of the reason I couldn't stop watching. It felt so real, but I was never fully terrified, because the humor keeps it grounded. It was a constant reminder that this is only a movie. 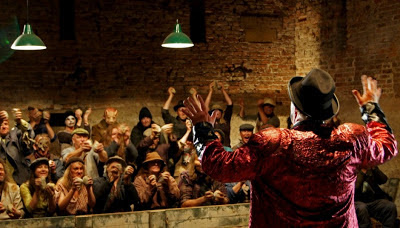 I'm not entirely sure if some of the inbreds in the film were genuinely deformed, or if it was makeup effects. Some of the people are definitely freaking looking and gives you an eerie, itching feeling. This movie is like "Freaks" meets "Eden Lake", combine them and you'll get an idea of what you're in for with this one.

I was so close to giving this film a 4/5, but due to the bad acting I mentioned, I can't rate it that high. But it's up there. As time goes on, I may grow to give it that 4.