Aftershock is a Tsunami of Terror 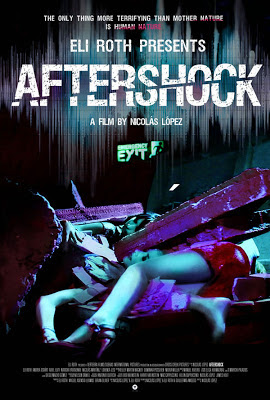 Synopsis taken from IMDb
In Chile, a group of travelers who are in an underground nightclub when a massive earthquake hits, quickly learn that reaching the surface is just the beginning of their nightmare.


Having been a fan of Eli Roth's work since "Cabin Fever" hit, I was anxiously awaiting the opportunity to see his latest involvement in film. Though he hasn't taken the director's chair since "Hostel: Part II", back in 2007, he's remained heavily involved in the genre. He's produced several films, including this one, as well as the Netflix original series, "Hemlock Grove". All of us horror fans have our eyes on him and what he does. He quickly made a name for himself in the horror community.

This film is fictional, however, it's based after the real events of the 2010 8.8 earthquake in Chile. Director Lopez, said that in the time of the real earthquake, the collapse of society was the most horrific thing. And that's how the idea for this film came about. 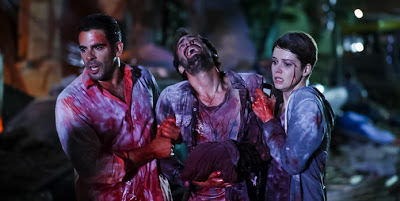 I read online somewhere that this has terrible characters in it, and I was inclined to believe that at first. I didn't like some of the dialog and I didn't feel the characters were genuine. Then, I took myself out of the picture and looked at it from a different stand point. I was or never will be like the characters in this film. I'm not a nightclub-er or always showing off to impress girls, but guys like this do exist. So the acting isn't bad and the characters aren't weak.

They're just not relatable to me. And once the tsunami starts, their fears and real characters start to flourish, and I began to see them as real people amongst the destruction going on. It's really amazed me how much I started to care for them, and it's because even if they aren't guys I'd be friends with in real life, they're real people in a real situation. You really become scared for them. It's that real terror, not the craps and giggles kind. Things get serious. The movie is boring at first, but I actually liked that aspect because it kept things realistic.

You need that reprieve that's in the first half hour because when the horror hits, it doesn't stop at all. It's like an avalanche of screwed up things, and it never lets up or slows down. The realism of it is what makes it so scary! The stuff these guys and girls go through just to survive the chaos is stressful in and of itself. Then you've got escaped prisoners attacking citizens, and you find the lead characters running for their lives from mother nature and human nature. 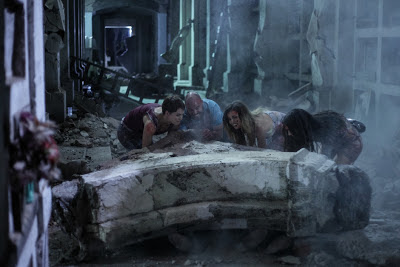 I think what works best about this film is that it's a disaster film, so there's authentic panic that comes with viewing it. And I absolutely love the fact that this movie isn't afraid of killing off big characters, that's also something that added to realistic feel the film achieved. I hate it when you know characters are safe, it takes the thrill out and the edge off. In this film, everyone is a victim in one way or another. It's downright nail biting.

This is another reflection film. It shows us how no matter what horrific thing happens, that we as a society, are capable of much, much worse and horrific things. Human nature is the worst thing that can happen, no matter how atrocious events are. We're always capable of making things worse, instead of sticking together as a band, like we should. Everyone is out for themselves, and it's a sad but true statement on society. The good ones, the ones that care are always made victims by those who don't.