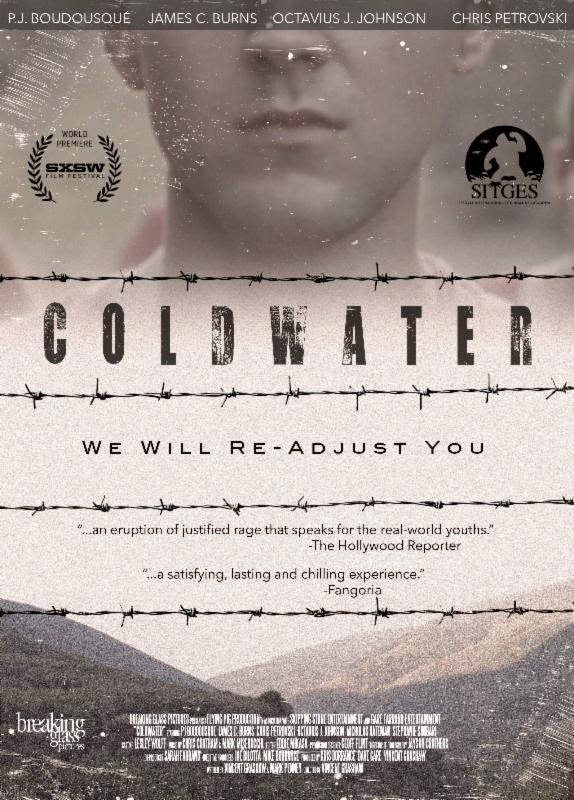 It'd be a cliche to say that this thriller/drama that's borderline revenge horror is "gripping" and "emotional", but it's absolutely true. I was gripped and pulled in almost from the very start, because it's intense and tragic. It's basically a grown up version of Holes (2003), and reminded me of Sleepers (1996) due to the realism and it's ability to make me feel sick from watching it. Director Vincent Grashaw, hasn't done a full-length feature before, but it's a damn good effort. The cast include P.J. Boudousqué (who's mostly known for this movie), James C. Burns (All Together Now), Chris Petrovski (All Cheerleaders Die), Octavius J. Johnson (Ray Donovan TV show), and Zach Selwyn (Dead and Breakfast). When I saw Zach Selwyn  was in this I almost stood up and cheered, because I loved his character in Dead and Breakfast, Randall Keith Randall. So it was good to see a familiar face going into this screener.

The story and screen are dominated by P.J. Boudousqué's performance as lead character Brad Lunders. Brad is sent to  Coldwater, a reform facility for juveniles for selling drugs and getting into a confrontation at a party that results in his girlfriends death, but not by his hands. Although he's in a tough spot by being in the facility, he's got fortitude and he's not afraid to stand up for himself. His friend Gabriel (Petrovski) was an honest kid who was shy and modest, but after being around Brad for so long he also gets a knack for finding trouble, and also ends up in the same reform, just two years after Brad. Colonel Frank Reichert (James C. Burns) is a strong and imposing character. The opening speech he gives is great, and he comes off hard but fair. It's a typical boot camp type of movie for the first act, but it doesn't end as it starts, and things start to get a little more extreme...

Likable Jonas Williams (Johnson) suffers a nasty leg injury after being run over, and is forced to run on it before his healing is complete. It gets so bad that he has to have his leg amputated due to infection. The amputation leads to a nasty lawsuit that's putting Coldwater under causes Colonel Reichert to become a steady drunk, and as the film progresses, and he allows his privileged students to bully the rest of the young adults horrendously. Brad gets beaten for escaping, and understands that the smart thing to do to survive is to just play along with whatever Reichert says, and he tries to explain that to Gabriel. Gabriel decides to rebel and be himself anyway, and it results in his being beaten and tortured. The scene where they stick a needle under his fingernail was so hard to watch, and Petrovski sells the hell out of it with his agonizing screams, making it even harder to watch. Due to Brad working his way up as the trustee, he sets things up to provide proof of how Coldwater's ran and managed, and how everyone is treated. The overall growth and decline in the characters spirit is "gut-wrenching", and you feel their hopelessness loud and clear. You know it isn't going to end happy, because by this point it's obviously not a positive film.

Even when something isn't happening of major importance, I was caught up in the characters, so I was always entertained and never lost interest. There's no room to really get bored during this one, the characters are so well-written and portrayed that you become emotionally invested in them. They're not perfect, but you can level with them and their situation. There's never much violence shown on screen, it's shot very tactfully and only shows what's necessary to invoke reaction and even emotion at times.

After reading the synopsis I found myself intrigued to watch it, and I am surprised by how much I enjoyed it. Though due to it being so depressing it's not one I can see myself watching very often, I have nothing I can say that I dislike about it. I highly recommend it to anyone who's a fan of cinema and doesn't need buildings blowing up every five minutes to entertain them. It's well acted, the story is fascinating, and it comes off completely genuine in all aspects.