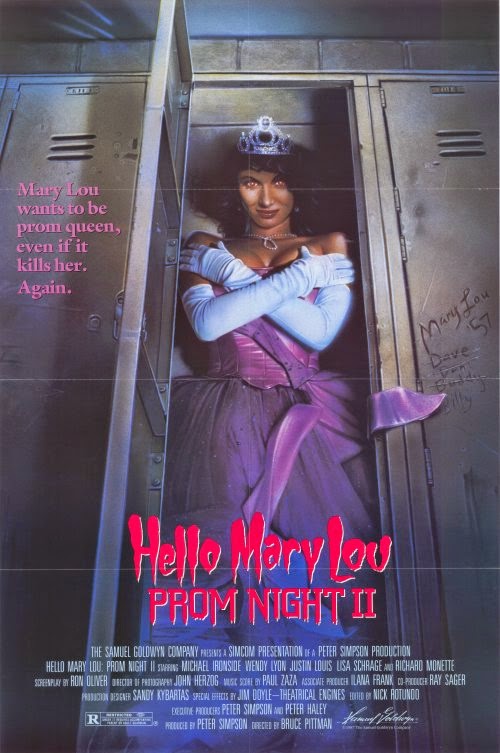 In a genre where follow-up movies are especially known for "milking the cow", Hello Mary Lou: Prom Night II is one of the greatest horror sequels ever made. I've said that since I saw it, and I still stand by that. Though it's not as dark or tragic, this always has and will give Carrie a run for it's money. Someone from the Village Voice once said that "it's like a Brian DePalma movie for slasher fans", furthering my point that it stands toe to toe with Carrie, and in my opinion is superior. For those of you who don't know, Brian DePalma is the director of the original Carrie, but is most known for his masterpiece starring Al Pacino, Scarface. This stand alone sequel in the Prom Night series is directed by Bruce Pittman who's been around the game for a while. His last directorial effort was in 2012 called The Last Movie, and while I've never seen any of Pittman's other works, this is enough for me to respect the mans talent. Even if all of his other work is throwaway stuff (which I'm not saying it is, I'm just saying...), he knocked this one motion picture out of the park. The cast offers Lisa Schrage (Food of the Gods II), Michael Ironside (Scanners), and Wendy Lyon (Warehouse 13 TV Series) in this supernatural tale of a prom night from hell as Mary Lou, a victim who died in 1957 at her school prom, returns 30 years later to wreck havoc and get revenge.

This underrated gem is nothing like the original Prom Night, which featured a lot (too damn much) disco music and a moderately slow pace, and which is also a slasher film. Hello Mary Lou is not a slasher, and I think that's a common misconception amongst horror fans, especially for those those who haven't seen it. Because the first one is a slasher, everyone thinks this one is, and that's not the case. It's a supernatural movie about a haunting/possession. No, there is no mask-wearing knife-wielding psycho in sight in this flick. There's a lot less disco and a lot more scares this time around. I don't just think that it's better than its predecessor, because it's head over heels above the third and fourth installments in the series which aren't even worth mentioning. Not to mention the pathetic PG-13 remake that had nothing to do with the original storyline except that it takes place on prom night. The real shame of it is that Prom Night II seems to have gotten lost throughout time somewhere, because there's so many people who haven't seen it! I always encounter more who haven't seen it than those who have, but those who have viewed it are enamored with it, and it's a favorite that can be discussed over many, many hours if you find the right fans. 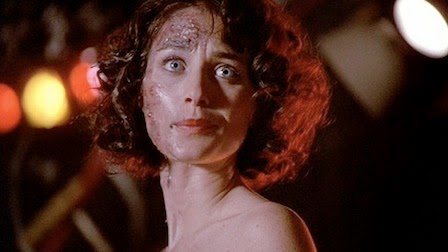 The story goes that Mary Lou (Lisa Schrage), a sexy and risque senior at high school, upsets her date for prom, and it results in her getting burned alive while accepting her tiara for being voted prom queen. So, yeah, Carrie can eat her heart out. Pigs blood vs. being burned alive? Is that even a contest? Anyway, here it is 30 years later, and the boyfriend who is responsible for murdering Mary Lou, Bill Nordham (Michael Ironside) is now the school's principal. His son, Craig (Lous Ferreira), is dating Vicki Carpenter (Wendy Lyon) when she becomes possessed by Mary Lou's angry spirit after messing around in the cellar with Mary Lou's old tiara. Vicki goes from being a sweet little girl to becoming a spitfire who doesn't let anyone push her around anymore. She stands up to fellow schoolmates and her parents alike, and shows them all that she has a mind of her own. Once prom night comes around, Mary Lou is set free and brings hell to the school auditorium. What I like about the characters in this particular movie is that they aren't all innocent, and yet I like them all the same. Mary Lou is a total bitch by all accounts, yet I find myself cheering her on and wait for her arrival at the end. Bill Nordham is responsible for Mary Lou's death, and yet he's a likable character because you know that he didn't mean to kill her. That doesn't make him a saint, but you can see he's a man dealing with his demons. Vicki is a wholesome girl who you kind of want to see stick up for herself, and Mary Lou gives her the balls to do it, even if it does go a bit too far. I've always liked the locker room scene in which Vicki/Mary Lou crushes her friend in a locker and you see what looks to be a cherry slushy leak out of the folds. It's brutal, but not as scary as the horse with red eyes in her room which used to be the reason I didn't sleep very much for about a month. But, I love dynamic characters like this where it isn't just cut and dry good or bad. Because in real life the picture isn't always that clear, so why should it be in movies? By adding flaws to the characters, it adds depth and the ability for viewers to understand those they're watching. The acting is surprisingly on par with the rest of the picture from just about everyone. I've never really had a complaint about the performances, while they may not be perfect, and some actors and actresses do stand out over others in the cast, everyone does their jobs well. And if you haven't seen this before, don't be so naive as to think that the ending is all as it seems. Because there's a good twist that ends the picture on a high note, like it deserves.

Despite being largely unknown, it still holds up today! That is of course unless you're a "entertainment junkie" as opposed to a "cinema junkie" . See, there is a difference. A "entertainment junkie" is someone all about action and a non-stop pace, they like Transformers and movies equally as bad, and only look for big explosions and special FX. These people also won't watch older movies because they say the FX are outdated, and lose interest. A "cinema junkie" is someone who understands that films are art, and see them as such. Granted all art is subjective and not everyone likes the same thing, but those who appreciate movies for quality storytelling and acting, as well as being social commentaries, see cinema on a whole other playing field. We're looking for quality, not just fancy cgi effects and loud noises. It takes more to make a good movie than that, and a lot of people don't understand that. "Cinema junkies" will watch black and white movies, foreign movies with subtitles, and new movies. We give them all a chance because we see them as art and don't just merely look to be entertained by a bunch of gunshots and buildings blowing up. If you consider yourself a "cinema junkie", then you'll love Prom Night II for all it has to offer. It doesn't have the biggest budget, but it rocks the hell out of the budget it had, and it doesn't disappoint. Its' one that you can watch over and over and over again and not get sick of, because it's fun, sexy, thrilling, and scary. It's still very effective because of the dynamic characters and the compelling plot. It's beyond good, it's great! Nowadays you get forced (and often terrible) acting along with a lopsided story that's only purpose is to either disturb you or bore you to death, and often it's the latter.

It's been years since I found Hello Mary Lou: Prom Night II in the $5 bin at Walmart, but ever since owning it I've all but wore it out. I was very young when I first encountered it, and while I liked it, I didn't remember much about it. Well, that's all changed now and I can see why I fell in love to begin with. There's nothing bad that I can really say about this one, there's not anything that I would change worth mentioning either. This is what 80's movies were all about, and it's one of the better ones. I may be alone in the world for my fandom of this movie, and I honestly could care less. I'll maybe never know why I took to this one so much (no, it's not because Mary Lou is hot), but it's stuck with me through all these years and probably will continue to do so. If you haven't seen this, I recommend you see it ASAP, especially if you're a "cinema junkie" like myself. I just say movie nerd, but junkie describes it pretty accurately too (laugh). If there were three horror pictures from the 80's that I were to say are must-see movies, outside of Michael, Freddy, and Jason, I'd recommend this one, Night of the Demons, and Trick or Treat. We get a lot of lesser quality sequels often, but we hardly get one worthy of a watch as much as Prom Night II.

BEST SCENE: I gotta go with when Mary Lou returns to prom. It's the moment the whole film builds up to. 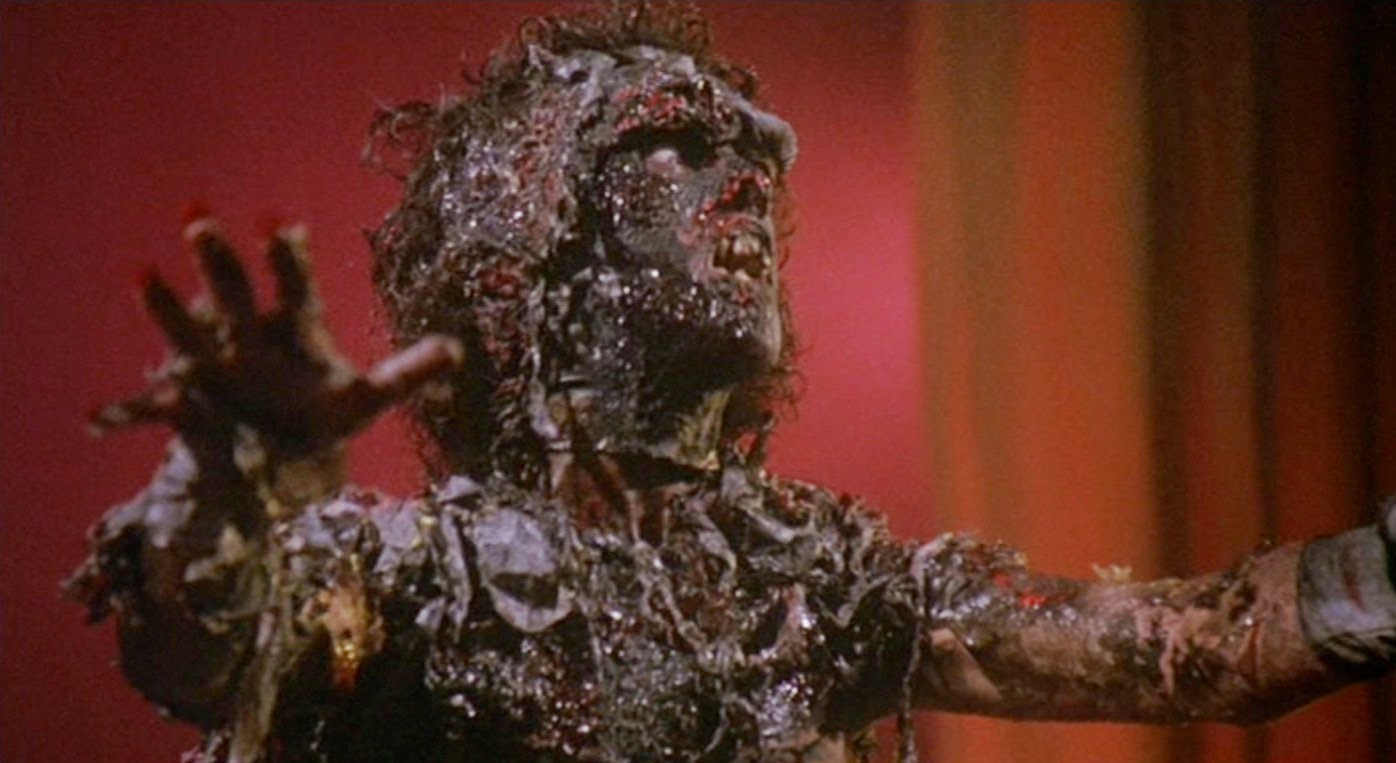 BEST QUOTE: I'm going to give this one to Mary Lou when she says "it's not who you come with, it's who takes you home", due to the fact that it shows you exactly how ruthless of a character she is. But by no means does she deserve death. 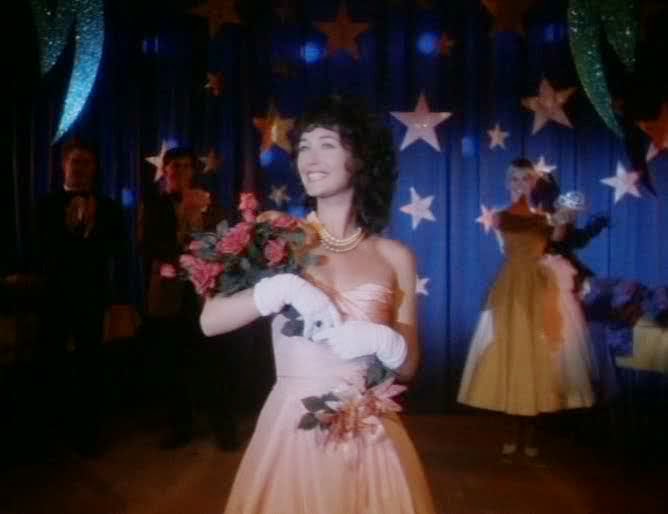