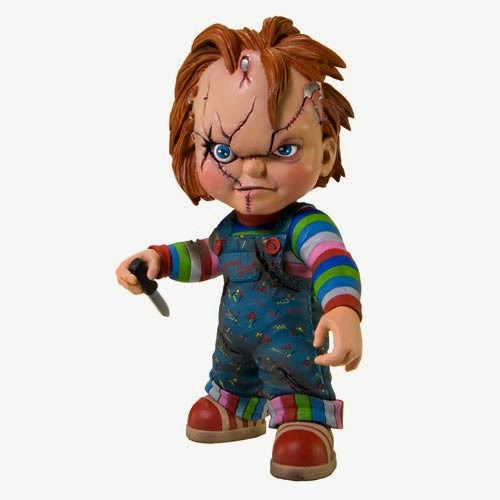 Now hitting stores and online retailers is Mezco's 6-inch Rotocast Action Figure of everyone's favorite serial killing doll, Chucky. This isn't exactly the type of toy that I prefer to collect, but I know there's a lot of people out there who are in love with this stuff. So, if you're one of those people, this is for you!

Product Description:
Chucky wants to play. Mezco presents Stylized Chucky! New York- "We're friends to the end!" Of course, with Chucky as your friend, the end comes much sooner than you ever expected. Chucky, the homicidal doll who contains the spirit of Charles Lee Ray, a serial killer known as "The Lakeshore Strangler," is the fantastic perturbed plaything product by Mezco Toys. Mezco's award-winning designers have created an all amazing sculpture in an awesome scale that not only captures the look of Chucky, but the very essence of his menace. Every detail has been captured; from his classic overalls to the unique imprint of the soles on his sneakers. From his glistening, insane eyes, and his sneering lips, to his shocking red hair, this is Chucky at his most iconic...and most evil! The star of the Child's Play movie series, Chucky features 7 points of articulation. He also comes with a knife that he is sure to use for no good. The 6-inch tall Chucky comes packaged in his own collector friendly window box so he can watch you and plan his attack. Ages 15 and up.

I first stumbled upon this Chucky figure when I was just browsing online, and while I'm not likely to buy it, I definitely and instantly saw the appeal of it to horror collectors. It's an adorable way to picture and own the crazed killer doll. As you know, in most of the Child's Play films Chucky is so ugly he's creepy looking, and now is everyone's chance to capture him in a more attractive fashion. He's very affordable and only costs about $18, and apparently he's a fast seller. Collectible retailer Entertainment Earth is already down to just one (1) in stock! (available HERE) Not to worry though, because since he's a new item they'll be getting more in stock very shortly. The same can be said for just about all other online dealers as well.

What's your thoughts on this little guy, will he be stabbing his way into your collection? Yay or nay?
Posted by Drew Grimm Van Ess at 3:21 PM