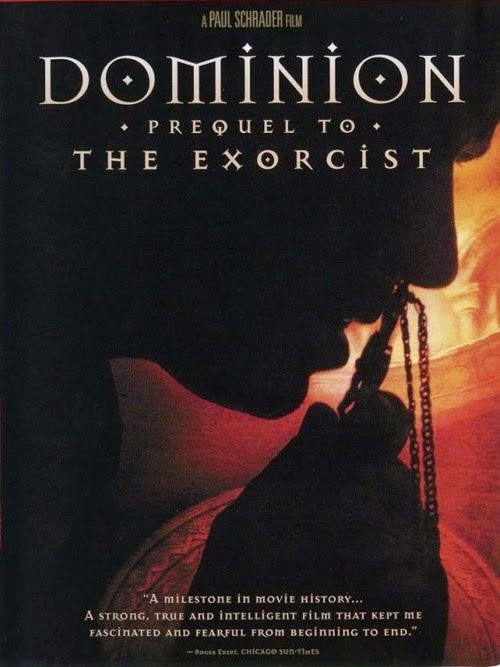 As I mentioned in my review of the original Exorcist, HERE, I had never gotten around to seeing the second prequel that was made and went straight to video. That's all changed now, because I found a dirt cheap copy of it on DVD, and have already watched it a good three times, maybe four. Though it didn't see a release until 2005, the director, Paul Schrader, was approached to tackle the project in 2001. From the jump, I respected this picture more than the dreadful Renny Harlin movie, Exorcist: The Beginning, because unlike Harlin, Schrader didn't try and mock or imitate the original Friedkin movie in any way. In fact, Schrader said, "the feeling was [that] you had to get away from the Friedkin Exorcist, because it was such a classic. And one of the ways to do that was to switch the possessed person from a girl to a boy, but even more importantly, to switch the very nature of a possession". It's no secret that a pet peeve of mine is when directors try to make prequels to outdo an original, rather than just let it flow naturally and be its own movie. So, my hat's off to Paul Schrader for both being respectful of the 1973 Exorcist, and for making a stand alone effort. The story is more about Father Merrin's journey than trying to be a horror flick.

Though not filled with very many scares, the story of Dominion is full of thick and rich storytelling. A lot happens in just under two hours, and to say it's "Merrin's journey" is to put it correctly. Rather than have the possessed be a female with cuts on her face like Renny Harlin's prequel, Schrader went a totally different path with it, and I think that's why it's superior to Harlin's interpretation. This can be a horror film depending on which ways you look at it, because some horrific stuff definitely happens, but ultimately it's a drama. It's the story and build up to what comes next in The Exorcist. Also, this isn't a prequel that looks fresh and new compared to the old one. Granted, it's more recently shot, but it totally looks dated, and fits in with the story of Captain Howdy damn near seamlessly. Nothing bothers me more than when a prequel looks all high-tech and advanced in comparison to a movie that's supposed to come after it (see Prometheus and Alien to catch my drift). I'm very pleased that there's nothing in Dominion to hint that it was shot at a later date than the original other than the crispness of the picture. It's also incredibly well acted, and the story is a gut-puncher. It's refreshing to see a new take on a classic that doesn't alter it, but instead honors it and gives it a tip of the hat. Schrader has been in the game a while now, and I commend him on being genius enough to not try and make it scarier than The Exorcist. It's something that has been attempted countless times, and yet it's never been successfully achieved by anyone to date (including Harlin). So rather than try and match or outdo an outstanding classic, he focused on building up the story of a broken hero. Originality always gets a nod from me, and if there's one thing that Dominion is, it's a movie that stands strongly on its own beside its predecessor. Nobody's annoyingly stupid and making bad decisions, instead everybody is and acts intelligent, which makes the whole story believable and worthy of investing in.

Now, although I do praise Dominion for being a drama and not trying to be scarier than The Exorcist, I can't help but be disappointed in the complete lack of thrills and scares distributed. I found nothing threatening or frightening about it. In fact, it's so not scary and thrilling that it gets downright boring at parts and drags on. As I mentioned before, I watched it about three or four times, but upon my first viewing I was certain that there was going to be some sort of scare or something that was worthy of the build up and waiting, only to be left empty handed. It wasn't until my second viewing that I took it in and appreciated it for it's separation of the other films in the series. But still, I wasn't creeped out or scared in the least bit. I think the horror aspect was a little too subtle and dormant. Hell, there's not so much as a successfully scary sound effect to be found in Dominion. I can't help but think that with The Exorcist being in the title that there should be some sort of terror within. So, when it comes to scares, I'd give it to Renny Harlin's version any day (even if that's all his movie has to offer).

Having grown up in a Christian household, and still practicing Christianity today in my adulthood, possession has and (probably) always will scare me. That being said, Dominion is the first and only movie about exorcism that I like that isn't scary. Whenever I watch  movies on the topic, I expect to be scared or at the very least feel some sort of unease, and when I don't, I hate the movie and think it's pointless. But, due to the compelling story and the well-written characters, I can't help but make Dominion an exception to that rule. It's not a perfect film, I wouldn't even consider it a horror film, but it's a good character story that leads right into Friedkin's 1973 all-time classic. This is the only movie in the series that I like outside of the first and third. I would positively recommend this, but, I can understand why some won't (don't) like it. It's an acquired taste, and if you go in expecting to be blown away, it's going to fail your expectations. However, in comparison to the Renny Harlin prequel, and say Exorcist II: The Heretic, you'll be pleasantly surprised.

BEST SCENE: I like when the demon is taunting Merrin in the unholy temple by creeping past him and up behind him with supernatural movement. 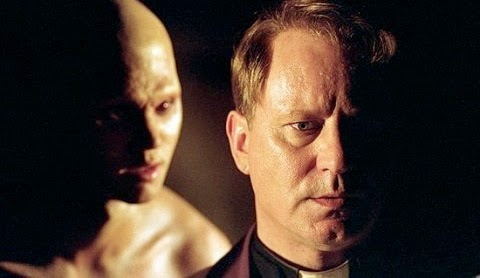 BEST QUOTE: There's a lot of good quotes to be mentioned, but I think the one that had the most impact on me watching it was Father Francis when he said, "Satan is real", to Merrin. 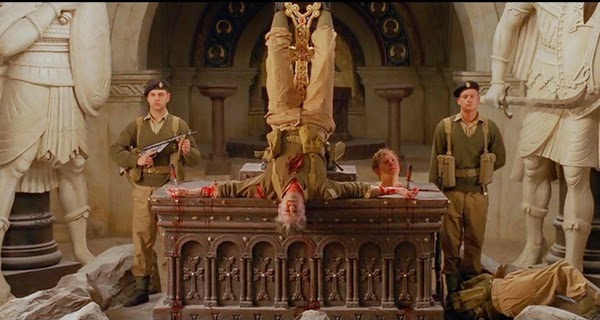