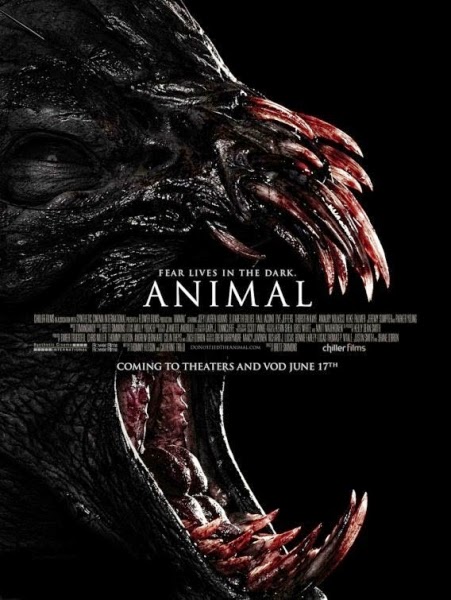 The Monkey's Paw (2013) director, Brett Simmons directs this survival story about a group of close-knit friends on the run for their lives from a beast within the woods. Starring Joey Lauren Adams (Chasing Amy), Elizabeth Gillies (Killing Daddy TV movie), and Paul Iacono (G.B.F.), Animal is an entertaining and relentless creature feature.

Two heterosexual couples and their homosexual friend get into something they have no idea how to get out of, and I couldn't help but cheer for the "animal" when it came to killing certain characters off. For the most part, the characters in this movie are intelligent and don't make many questionable judgements like in most genre pictures. So the problem doesn't lie with them falling into cliches as much as some of the characters just aren't trustable and likable. They do make some dumb choices, you can overlook them due to the smart moves they take. Aside from having good dialogue, there's no much more to the characters than what you see. But this isn't a movie that I wont judge for not having in-depth character story, because it's not that type of movie. It's an adrenaline rush you're thrown into, so there's no really time to go back and find out everyone's childhood and other details. You're stuck in the present with them as they try and survive, and tempers flare amongst them. The acting is exactly what you'd expect out of a TV movie. It's not great, but it gets the point across. 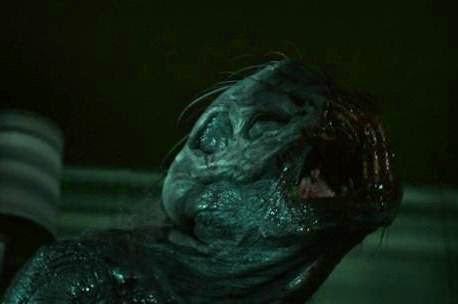 The "animal" isn't overly creative looking, because we've seen something done like it before (and done better) in Feast. I think the likeness is there and obvious to anyone who's seen Feast before, but all criticisms aside, the beast is really cool looking and different in a couple of ways. One of them being that it's almost always in a crouch position and walking/running on all fours. It's vicious, and while the movie isn't overall very scary per-se, it's absolutely thrilling to watch the creature in action because it's so violent and bloodthirsty. It's a very smart beast, and looks for weak spots to enter the cabin in which the main cast is holed up in. The two major things that I loved about the "animal" is that it's all practical FX. From what I've seen, there's no cgi involved, unless it's blended in really well with real material. I adore it when the monster in a movie is a person in a highly detailed suit, so Animal gets a thumbs up from me for that. The other thing that I liked a lot and appreciated is how they hardly show the "animal". Way too often the villain is exposed and given too much screen time, and it leaves very little to the imagination. Well, I don't know if it was a creative decision or just done due to budget, but the lack we see of the beast is for the better. Not being able to put a full figure image together of this fast-paced hungry beast is a brilliant decision. Don't get me wrong, you do see the "animal" in all it's glory, but it's done over several shots. The camera doesn't just sit there idle and watch the beast for moments at a time. The less you see of the villains in horror movies, the better. So a thumbs up from me on that too. Plus, there's some good gore as we see the "animal" disembowel someone pretty early on. You only have to wait three minutes into the movie before there's death.

The dark humor laced throughout truly makes it an almost enthralling experience to watch it. Providing laughs that aren't too conventional is always a plus, and doesn't hurt movies like this any. Although the plot is pretty simple and it's not overly inventive, it's still a fun watch that definitely gets intense at times. Especially when the main cast hides out in a cabin that we discover is already occupied by the survivors we see in the opening of the movie. And, there's some seriously great camera shots and angles, and there's some particularly good jump scares that are in fact effective. If I jumped a few times, I'm sure you will too (laugh). 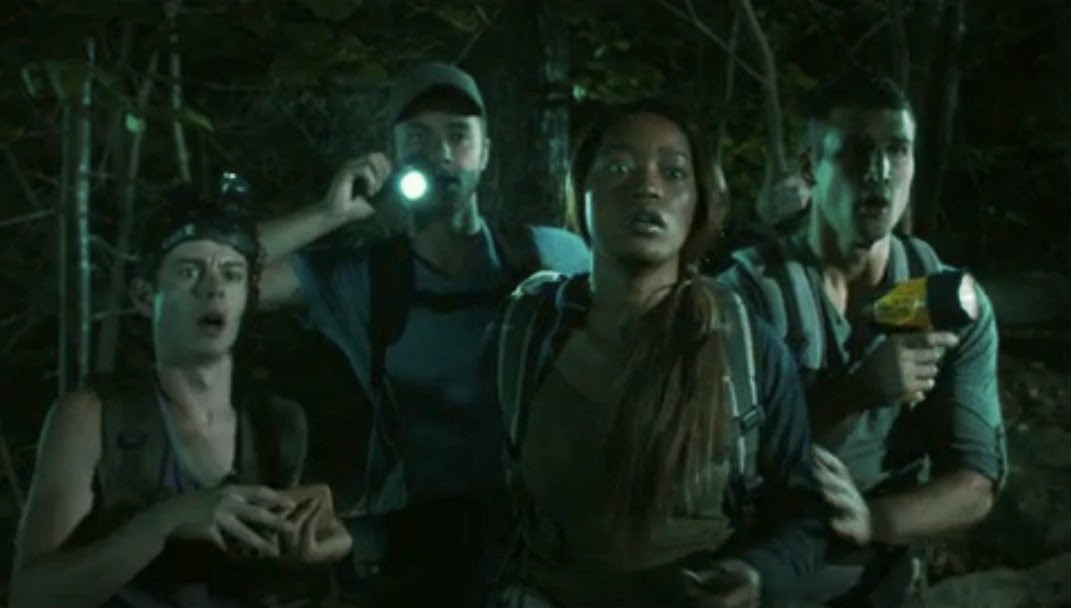 There's not much about this movie that I dislike, because I take it as it is for what it is. It's a balls-to-the-wall creature feature that's packed with blood, guts, laughs, and jumps. While I do indeed like this film, I'd be lying if I said it's worth paying for. If it's on TV or you want to order it off of your cable provider and watch it from home for a small fee, that's fine. But this isn't a motion picture worthy of dragging you to a theater to pay out the ass for a ticket. So my verdict is, it's a must see unless seeing it is costly to you. I'd buy this one, despite its obvious attempt at mocking Feast.