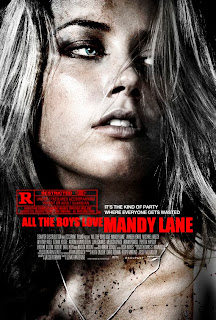 
Synopsis taken from IMDb
The orphan Mandy Lane is a beautiful, virgin and pure teenager raised by her aunt, desired by her schoolmates and a close friend of the outcast, Emmet. After the death of their high school mate in a pool party, Mandy befriends Chloe, Marlin, Red, Bird and Jake. Red invites the group for a weekend party in the isolated ranch of his family, with all the boys disputing who would succeed in having sex with Mandy Lane. They meet the henchman, Garth, that takes care of the ranch and he asks the group to go easy on the drugs and booze. In the middle of the night, a stranger wearing a hood attacks Marlin in the barn; when Jake seeks her out, he faces the killer, beginning a night of bloodshed and terror.

This is one film I was very eager to watch, I heard about this film about a year ago and I heard it was good. It slipped my mind and up until a few days ago I hadn't thought of  it. But when it hit me, I knew this was the one I had to watch. And I'm glad I did.

The movie starts off with a happy tone but you can tell with the setting that there's something dark lurking there just beneath the surface and this is what keeps you intrigued and makes you want to keep watching. They did a good job with that.

The pool scene in the beginning shocked me with the death, not one I saw coming. It may be obvious to someone else when they watch it, but I though the guy made the dive into the pool off the roof of his house. I didn't think he'd die so suddenly. Good scene.

The cast of this movie was pretty good actually! I didn't mind it, it wasn't bad enough to make or ruin the movie. They came off as real teenagers doing what real teenagers do. It's kind of funny because I thought they acted like the kids in the Friday The 13TH remake and I thought the group as a whole gave the same feeling the Friday The 13TH remake did. Of course the difference is Jason isn't plowing through these teens. These kids have no idea who's killing them off.

This movie definitely felt real and I was pleased to be as intrigued with this movie as I was because I haven't been on a great role with movies lately. So I was uber excited to see this one come to climax.

The gore in this movie was realistic and not over exaggerated, there wasn't alot of it though. It was only used when needed. The kills in this movie weren't anything great however, and that kinda sucked. 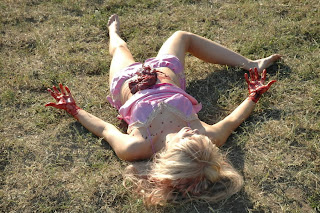 Once the movie was over I was kind of indifferent. It wasn't as good as I was hoping but it wasn't bad. The killer was predictable but the twist was pretty good. I felt that there was going to be something about Mary, a reason why everyone was lusting for her, like maybe she was a succubus or something. But there wasn't anything about her like that. She was just a hot girl guys liked.


THIS FILM GETS 2 AND A HALF REAPERS OUT OF 4 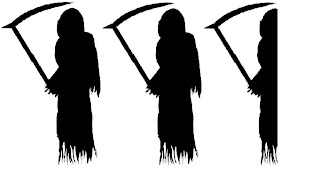