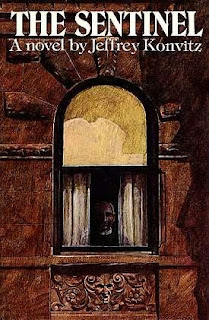 In 1974 author Jeffry Konvitz made a landmark novel in the horror genre that was passionate, enthralling, compelling, gracefully written and brilliant. It was chilling to the core and it was one of the greatest books I've ever read. It keeps you guessing and doesn't let up on plot twists and shockers. It's a book any fan of horror fiction can easily fall in love with. It's smoothly written and paints the picture perfectly.

I actually was introduced to the movie adaptation (1977) of the book starring Chris Sarandon and Burgess Meredith years and years ago when I was a young kid. I remember the movie scaring the hell out of me but it left such an impression on me that I became obsessed and it remains my favorite Haunting movie to date. It wasn't until years later that I realized the movie was based on a novel, so I bought the book and just read it. I don't know if I was happier that the movie was identical to the book or vise versa. There are a few minor differences but at their core they're one in the same.

The Sentinel is about a young and gorgeous model Alison Parker, who is still overcoming her emotional situation after her father passes. She decides to pick up her life by moving out of her boyfriends apartment and into a New York Brownstone building that's just what Alison needs to get away from her issues and clear her head. But things as usual, are too good to be true as Alison starts to realize how weird her neighbors are, an old man named Charles Chazen and a lesbian couple living below her. She also starts to get woken up in the middle of the night by heavy footsteps in the apartment above her.

After complaining to the landlord she comes to discover that there is no one else in the apartment building but her. But she refuses to believe the people she met are mere figments of her imagination and decides to investigate what's going on. But as she does she starts to get splitting migraines that eventually start making her immobile. Is she crazy and haunted by the guilt she has over her fathers death? Or is she being toyed with by greater forces involving heaven and hell, good and evil?

I suggest you watch the movie if you haven't seen it and if you haven't read the book I highly recommend it. This book is a 1 million copy bestseller and is a staple in horror literature.

It starts slow, steady, and builds up gradually and takes you through every cloudy thought and illusion Alison has, eventually leaving you with no option but to not put the book down and keep reading. The suspense is fantastic and the chills and creeps are good, they keep you scared of what's to come next and yet you're excited to get there and find out anyway.

As the story unwinds and it all adds up I was also very impressed with the characters and how well written they were as well as their character development.

So do me a favor, if you're in the mood for a good book and don't have one yet picked out to read, pick this one. You won't be let down.

After reading The Sentinel I jumped right into The Guardian (1979) which is the sequel to The Sentinel, and I was shocked to see that it was even better than it's predecessor. Why it was never made into a movie I have not idea but I consider it one long over do. But more on that next month when I review it...