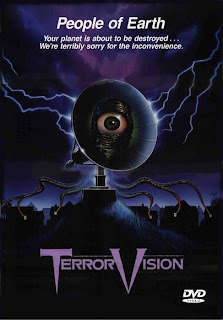 
Synopsis taken from IMDb
A civilization on a distant planet has found a way to solve it's garbage problem: turning it into energy and beaming it into outer space. A flaw in the system is found when the signal is accidentally picked up on Earth by the Putterman family's home satellite dish. While this would ordinarily be just another mess, this particular transmission contains a hungry trash monster who quickly begins snacking on the Putterman's and the their guests. Only young Sherman Putterman has any clue what is going on, but nobody will believe him. Is there any hope for Earth?


This movie is such a classic! I can't believe it took me this long to finally watch it. Actually I owe the credit to Fright-Rags. If they hadn't released their awesome Terrorvison shirt I wouldn't have been reminded to watch it.

This movie is hilarious and is just plain fun! There isn't too much to be taken seriously about this film but it's a good and entertaining watch. Definitely more comedy than horror in this one. It's a fun watch and had me laughing out loud at things before the alien even showed up. The cast was hysterical, such bad acting compact into one group of people. But that was the idea for this film, they weren't going for Oscar winning performances.

Especially Mr. and Mrs. Putterman. They're swingers who pick up a couple to swing with and bring them back to their place, not knowing the alien's already at their house. Boy were their guests in for a surprise. 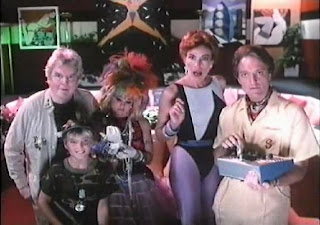 And let me add that I loved the theme of this movie. From the opening credits I knew what I was in for.


And the alien was hideous but awesome. He was so cheaply designed and looks so crappy but it works perfectly. He eats everything, this dude don't stop he keeps coming. His mouth is like a vacuum. He has a couple of funny moments as well, but it's mostly the people around him and how they're reacting. He reminds me of Chet from 1985's Weird Science when he gets turned into poo. 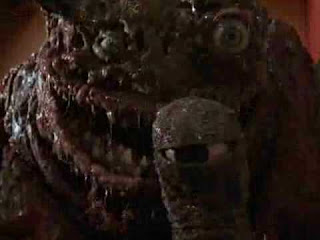 Another thing that I loved about this film was the hot Medusa, she was the films version of Elvira, a horror movie hostess with huge knockers. She takes late night calls in between commercials and when Sherman Putterman calls and asks her for her advice and help and she just can't wait to see it in person. 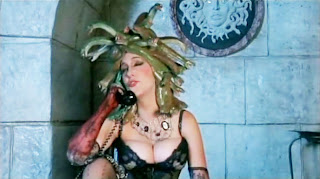 This movie was pure fun and laughs! I'm a fan. It's just another really bad but awesome horror film. And it's good for the humor.

This film was made by Empire International pictures, Charles Band's production company owned prior to joining Full Moon Features which has given us classics like Puppet Master and Castle Freak.