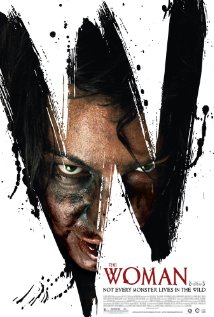 Synopsis taken from IMDb
When a successful country lawyer captures and attempts to "civilize" the last remaining member of a violent clan that roamed the Northeast coast for decades, he puts the lives of his family in jeopardy.

This film is the sequel to 2009's Offspring

When I first saw The Woman I was hooked, I liked the movie alot and thought it was well made. However my biggest fault with this movie is the music playing through 80% of the movie. It's just annoying after a bit. I want to know why they didn't just invest in having an orchestra conduct a theme for the The Woman, a signature bit. I think this movie would have been alot scarier and eerie if there was a creepy theme.

Another thing I didn't like (cause I'm a stickler for detail) is that in the nude scenes she's groomed. No pit hair or leg hair or other hair. Now I know it's nasty but I think this movie called for that. It would have felt more authentic.

Off the bat I knew that I hated Chris Cleek (played by Sean Bridgers) the father of the family that captures The Woman. He was one of those guys you knew was going to be dispicable. He and his son are twisted bastards. Good acting though and very convincing.

Angela Bettis did a good job as Belle Cleek as well. She played the submissive, scared housewife who's just had enough of her husbands antics and doesn't care the cost of taking a stand. 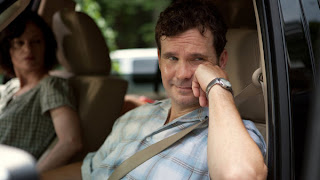 They did a good job of making The Woman look wild and animalistic, very imposing and intimidating. There's actually scenes where she tries to lean to speak English. We also hear her talk in her wild language, just like in Offspring. They definitely try to tame her but the old saying that goes "you can't cage a wild animal" applies to The Woman. 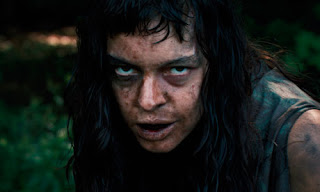 The gore in this movie was top notch, there was alot of gore. Especially in the last 10 minutes of the film. My favorite scene is where she bites Chris Cleek's finger off in the storm cellar. I didn't see it coming and the way they showed her chewing the finger in slow motion to show you how much she enjoyed it. You hear her chewing the bone and all. And she ends the act by spitting his wedding ring back in his face, nice touch.

This movie has alot of crazy things going on. There's a scene where Chris Cleets rapes The Woman late at night when he thinks his wife's asleep not knowing that she's really not. There's also a very brutal scene that goes down with the son of the family, Brian Cleek and a pair of pliers against the defenseless Woman.

This movie's got my approval. A good watch.