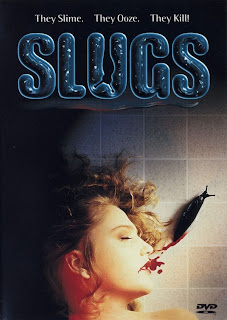 
Synopsis taken from IMDb
People are dying mysteriously and gruesomely, and nobody has a clue what the cause is. Only health worker Mike Brady has a possible solution, but his theory of killer slugs is laughed at by the authorities. Only when the body count begins to rise and a slug expert from England begins snooping around does it begin to look like Mike had the right idea after all.

First let me mention that this movie had some good effects and gore! I was surprised by how good these were. Especially when I wasn't expecting alot. 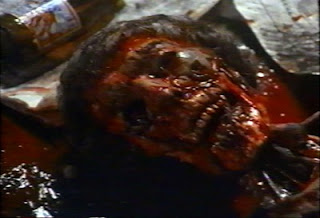 The movie had its corny parts and some of that good ol' 80's cheese. But the only notable part of the cheese was when the slug bites the lead characters finger. It looked totally fake but they only showed it for a split second, so it was well played.

The slug scenes are well played as well, they were pretty legit looking slugs, only giant and black. They can come out of any piping system running through your house because they dwell in the sewer. They can come out of your sink faucet, bathtub faucet, and even your toilet. And there was alot of these things. They were everywhere. They ate people so they pretty much chowed on the townsfolk Piranha style. 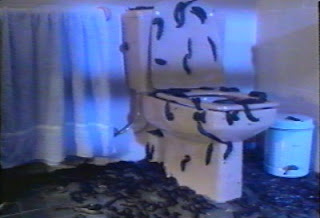 This movie is one I'd buy. After watching it I gotta say that I enjoyed it and it was nice to be surprised with a movie you had pretty much written off. Yeah, it's 80's camp horror, but if you're a horror fan you'll like it. It started off good, keeping you intrigued and then the slugs come in and wreck the place. It was pretty well made, I'm a fan. It wasn't great, more like an underground classic, but it was an entertaining horror film.

I'd have to say that my favorite scene in the movie was where the worms exploded out of the guys face. Wow. You knew something was going to happen to him because he kept getting stomach cramps, but you don't think what happened was what was going to happen. 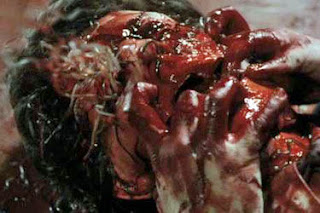