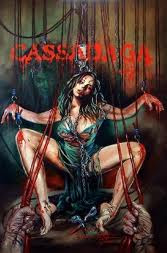 
Synopsis taken from IMDb
Devastated by the death of her young sister, Lily Morel seeks solace at the spiritualist community of Cassadaga. But instead of finding closure, she contacts something else - the vengeful ghost of a murdered young woman. With her life crumbling all- around her, Lily races to unravel the mysterious circumstances surrounding the woman's death - a task that will bring herr face to face with a sadistic serial killer known only as "Geppetto".


I love when I don't read up on a movie and know any spoilers, it makes it worth our while to be offset by a movie packing a big punch. I had no idea Cassadaga was going to be as harsh and gritty as it was. It's brutal as hell. Dread Central said "while not a perfect film, the film does have a freshly unique voice and is one which more than likely genre fans will want to sink their teeth into".

While the acting suffers a bit at times, it's fairly good and the film doesn't suffer from it. Kelen Coleman does a pretty well job as the lead Lily, she's convincing and there are a lot of points in this film where you're genuinely scared for her. True Blood's (HBO) Kevin Alejandro does a reasonable job at playing Mike, Lily's love interest in her new unfamiliar town. Mike adds a good dynamic to the story, alleviating all of the films weight from being only on Lily. This movie starts off showing you that it's not joking or playing, it's a horror film that wants to be taken seriously, and they make that very apparent. We see a young boy in a girls dress playing with dolls. His mom walks into the room hysterical, verbally lashing out at him and reminding him she told him to stop dressing like a girl. She rips the dress off of him and breaks his dolls.

While she's doing the dishes downstairs she hears her son scream, she goes up to find he's cut his man genitalia off. Whenever a movie hits you with something hard like that right off the bat, you know you're in for a bumpy ride.

Whenever the lead character in a film thinks something weird is going on, they presumably go to a psychic. Lily is no different. I found the scene with the psychic to be creepy, you could tell something creepy was about to happen, as they always do when you visit a psychic in a horror film. The more Lily digs into the spirit haunting her, she finds a grave secret along the way about a psychopath who she believes to be a killer. 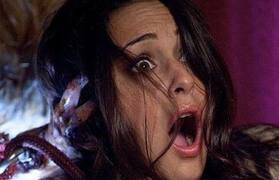 The female ghost haunting her is scary looking, I like the fact that they only use her in short bursts and don't spend too much time on focusing on her appearance. It's more of what you don't see that scares you, but you can tell she's screwed up looking.

Little does she know that the creep she's looking for is actually known by the public as "Geppetto". He's a sadistic killer who cuts the limbs off of his victims and puts them back on with metal hooks and loops to make them look like puppet appendages. He then proceeds to string them up to the ceiling like marionettes and toy with them, and they're alive during this process. 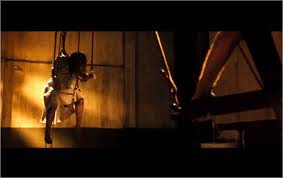 When I first saw this scene I was shocked, it's so brutal and sick, it sat with me. It reminds me of the Ice Truck Killer from season 1 of Dexter, something that just kind of rocks your mind with it's rawness. It's sick, brilliant and original.

You can clearly see that Geppetto is one twisted dude, he's disturbing to watch. As Lily digs deeper and deeper the movie becomes even more suspenseful and chilling. It's a haunting movie and a psychopath movie, how can you go wrong?

This movie isn't perfect, but it's a damn good watch. I was pleasantly surprised by it and plan on watching it again soon. This is a horror film with balls.