Boredom is all you'll be AFFLICTED with 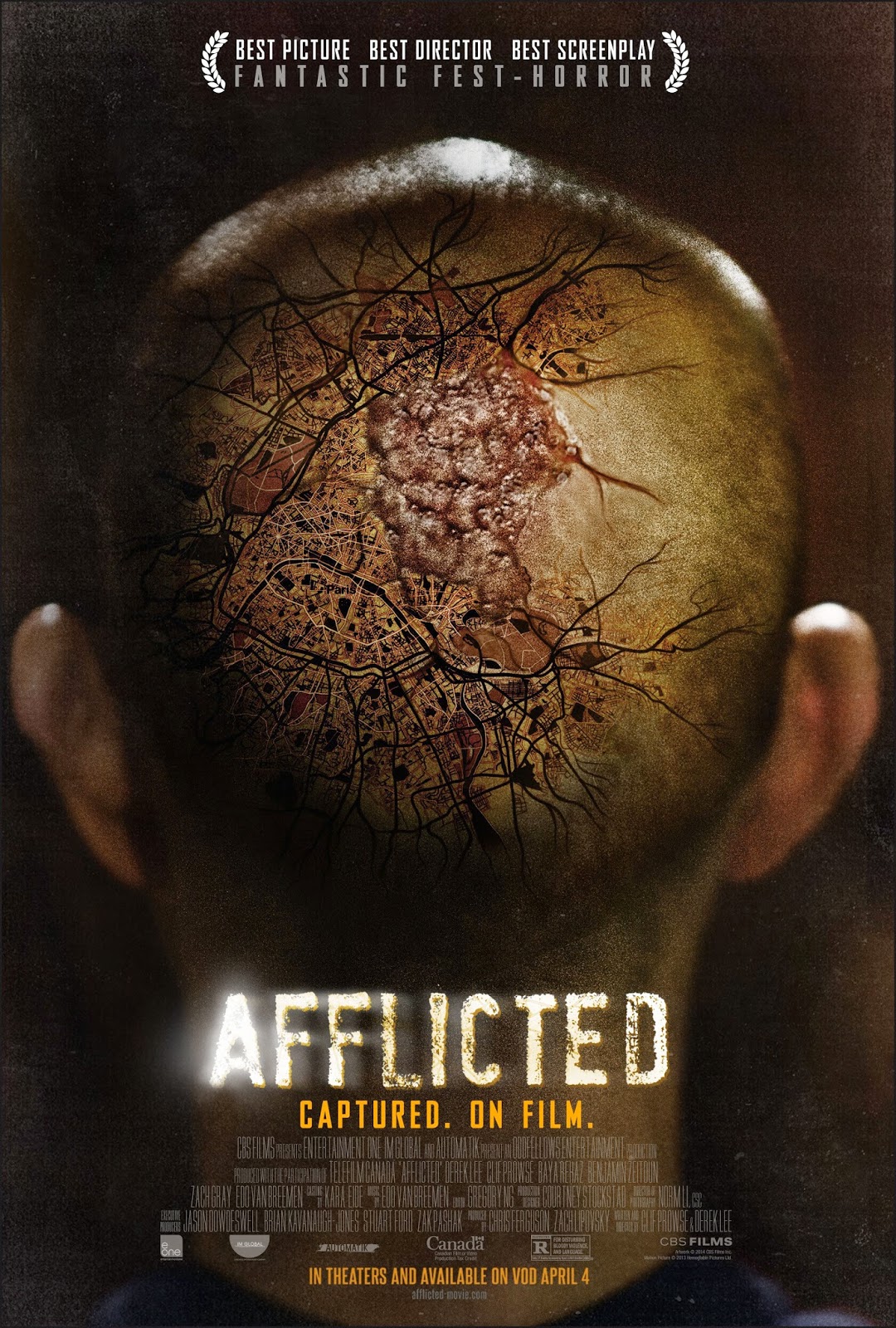 Synopsis taken from IMDb
Two best friends see their trip of a lifetime take a dark turn when one of them is struck by a mysterious affliction. Now, in a foreign land, they race to uncover the source before it consumes him completely.


The first things that came to my mind when I was watching "Afflicted" was how it's yet another found footage film. I understand these types of movies are hot in the filmmaker community, if not just for the financial benefit of them not costing much to make, but this trend needs to die off already. Or at least tone it down. Found footage features are getting to the point of zombie flicks now, with how many terrible genre installments there are yearly. I think that as of now, unless it's done by a well known director who I support, I'm staying away from this sub-genre. It offers nothing new, and has been used to death.

We meet Derek (Derek Lee) and Clif (Clif Prowse), and we find out that Derek has AVM. Basically he has a tangle of blood vessels in his brain, and his time in this life may be limited. If there's an accident, and he hurts his head, that's all she wrote. So, rather than bask in his own self-pity and misery, Derek decides that he and his best friend since childhood, Clif, should tour the world. Of course, they have to film the entire experience for a live travel blog that they title "Ends of the Earth". Clif, wants to spend the time with his buddy before it's too late, he may not get another opportunity like this again in Derek's lifetime.
I appreciate the character's chemistry and history, and you can tell that they're bond is real. Both seeing their interactions on screen, and the photos of them as children, it's easy to see that the friendship is legitimate.

After meeting up with some friends who are in a band, Derek takes a girl back to he and Clif's hotel room. When Clif arrives later, he finds an unconscious Derek who's also wounded on his face, and has a nasty gash on his left bicep. After refusing to see a doctor and get his head and wounds checked out, Derek starts acting strange, and he throws up a lot in a restaurant, causing a scene. And his face and hands start burning, turning red and covered in welts. After constant refusal to see a doctor, his 'affliction' worsens, and the film goes in a different direction than I expected. 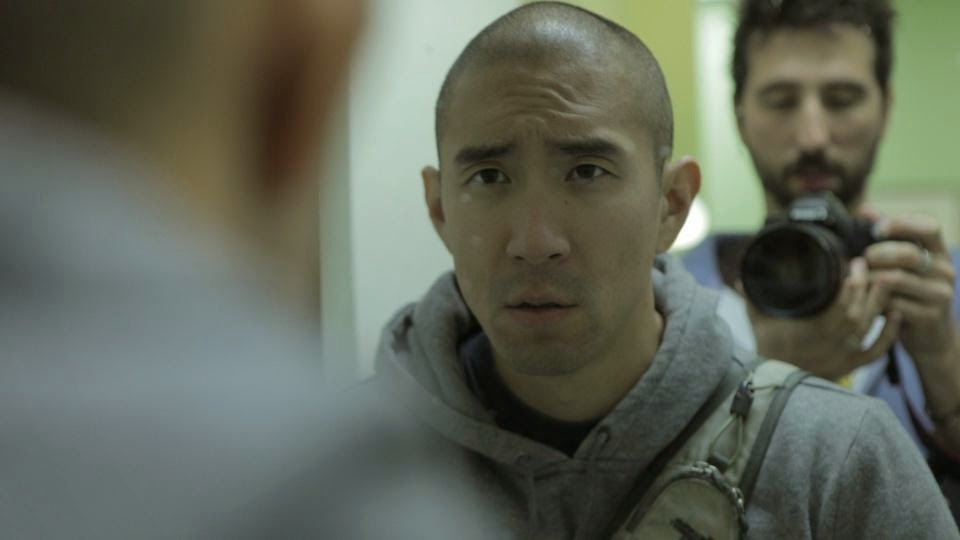 Aside from feeling and looking ill, Derek realizes that he has the ability to now punch through rock walls, and break rocks in half. He can also run over 160 miles per hour on foot, and he can leap unnaturally high. Clif, is not okay with all of this, but doesn't want to force his friend to stay in a hospital. If you ask me, Clif should have manned up and made Derek see a doctor, instead of catering to his feelings. After a confrontation in the street with random guys, Clif posts the video online. He then reads the comments left by viewers, and a small detail is brought to his attention: Derek licks blood off of his hand after a confrontation.

I think anyone watching can figure out where this is going once that little incident happens. And being honest and blunt, the characters are idiots. I understand not wanting to make your trip miserable, but at what point do you break down, put your selfish reasons aside, and get examined by a doctor. Not doing so only results in a worse aftermath, and both of them get what they deserve for beings so soft and stubborn. Rather than insist on Derek seeing help, Clif aids him in killing a pig for the blood. Then Clif whines and complains that he's traumatized from the animals savage death.
Like I said, idiocy. It's really hard to like characters in a movie when they're doing ridiculously dumb things.

And things turn messy real quick because neither Derek nor Clif know how to clean up after themselves, and leave a trail of chaos behind them. There's one part that is surprising and got a reaction out of me, and that's when we see Derek in his semi-animalistic state from starvation. As it turns out, human blood is required to survive, animal blood won't do the trick. Derek remains unconscious for 11 hours. After complications involving Clif offering up his blood, Derek is solo the duration of the film, which leads up to the best scene in the movie; Derek's suicide attempt.

When Derek goes in the sun, we see some pretty well-rounded makeup effects for burns. And once he's on the run from the police, he ends up broke, trying to survive and looking for answers. From there on it's just silly, and I lost any and all connection with this film. I noticed that this motion picture was much better carried on the shoulders of two leads than one. Derek's journey isn't intriguing enough without the input of Clif. It's just a bunch of scrambling around to find a cohesive plot.
The first act was a lot better than the second and third. 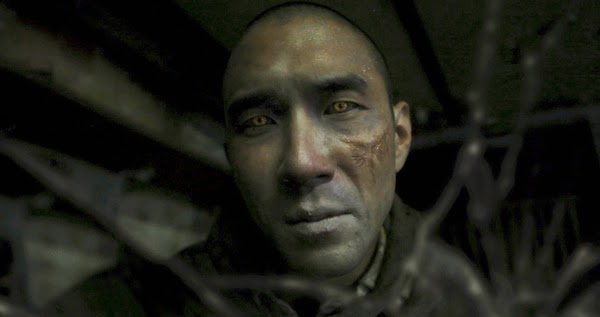 The worst scene for me, involves Derek being totally animalistic and savage, yet he's still holding the camcorder, recording all of the violence. It makes no sense, and scenes like this are why the found footage sub-genre is on it's last leg. We're at the point now where we'll need a miracle in found footage for this style of movie making to become everything but the laughing stock of horror. But regardless, stick around through the credits for a last minute surprise.