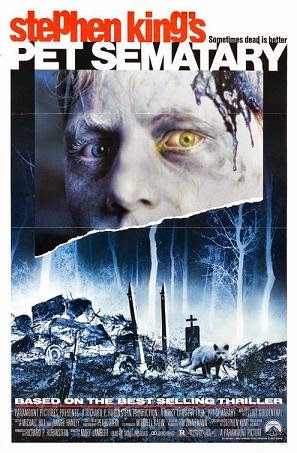 Synopsis taken from IMDb
Behind a young family's home in Maine is a terrible secret that holds the power of life after death. When tragedy strikes, the threat of that power soon becomes undeniable.


"Pet Sematary" is one of the first genre pictures I ever saw, and I was only a child at that time. The film had been out for a few years already by that time, and I can't recall how old I was, but I know I was in the single digits age-wise. I also don't remember how or why I watched it at such an impressionable age, but the nerd in me is glad that it happened. I have a lot of memories with this one, my entire family are huge Stephen King fans, so this was a hot topic in my neck of the woods.

My older sister saw it when it was released in theaters, and she also was only a child when she experienced it. A story that I grew up hearing about is how my sister urinated herself in the theater at the first appearance of Pascow, played to perfection by Brad Greenquist. I also have a story that might be funny to other people, but it sure as hell wasn't funny to me at the time. As a child, I had a three foot tall Power Ranger plush toy of the Red Ranger. My dads maniacal mind deviated a plan to pose the toy in my doorway, and out of any light source, so all I could see was its silhouette.
My father quoted (at the time) young actor Miko Hughes' memorable line as Gage, "now I wanna play with you...". It was the middle of the night, and when I heard the words spoken, and turned to see what looked like a child standing in the doorway to my bedroom, I screamed out and damn near wet myself. My dad got a good laugh out of it, and I guess you can say I get my twisted sense of (torture) humor from him.


I mean, even the opening credits are creepy. The children's singing along with the dark, demented tombstone visuals sets the mood, but doesn't prepare you for what you're about to experience. Ya know, aside from Rachel's (Denise Crosby) father, I don't think there's a single character that isn't likable. I mean, the second they move into their new accursed home, Judd Crandall (Fred Gwynne) saves Gage from an oncoming truck, and becomes a fan favorite. You just know you're going to like him, he seems genuine.

When Louis (Dale Midkiff) can't save Victor Pascow at his new job as a doctor at the University of Maine, he's soon haunted by his image. Only Pascow doesn't want to bring harm or bad luck to Louis, instead he wants to warn him of coming events, and save Louis' life for trying to save his. Louis thinks he's just dreaming until he awakes and finds his bare feet covered in mud after dreaming of walking through the Pet Sematary. After learning of the gravesite for children's deceased animals, the door opens for the Creed's lives to change for the worse. Especially after Judd tells Louis the truth about the cemetery; that it's an old Indian burial ground with the ability to bring dead animals back to life when buried there


So when his daughter, Ellie's (Blaze Berdahl) cat Church is hit by oncoming traffic, Louis does the only logical thing there is to do: he buries the cat in the cursed Indian land that lays beyond the children's Pet Sematary. When Church arrives home, he's a changed cat. He's mean, calculating, and dreadful. Not to mention he stinks...

We get some character time between Louis and his wife Rachel, and we see that they're making ends meet, but like all family's, they have their issues and drama. We get small hints at why Louis is hated by Rachel's father, and subtle things like that that fill in gaps nicely, and add a lot to the overall story and the way we view characters. Rachel's backstory is actually possibly the scariest scene in the entire feature. I don't think there's a single person out there who isn't somewhat creeped out by Rachel's sister, Zelda, who is actually played by a man named Andrew Hubatsek. While I think we can all agree that Rachel wasn't completely wrong with letting her sister die, she also wasn't right. So with complex storytelling like that, we get the black, white, and grey areas in their lives that allow us to sympathize with them.


Then of course, poor little Gage gets hit dead by a freight truck after chasing his kite through the grass. A co-worker of mine, and avid horror fan, told me once that the scene at Gage's funeral when his casket tips is the scariest scene ever. While I disagree, I can agree that it is unsettling, and scary in an unconventional way. It's more just uncomfortable for me, really. Judd tells Louis of a past story involving a man burying his son, who died in the war, in the land beyond Pet Sematary. The story includes details of that son coming back from the grave, and savagely attacking his family, only to be stopped by townsfolk burning his house down with everyone in it.
However, logic is beyond Louis, so he doesn't take a hint. While Rachel and Ellie are at Rachel's parents house, Louis digs up Gage from his peaceful plot, and takes him up to the dreaded land and buries Gage anyway. This is where it gets really, really good.

When Gage returns from the grave, it's nothing but bad news for everyone in sight. Starting with Judd, Gage goes on a eerie killing spree. The scene in which Judd Crandall is murdered by Gage is horrifying, and it defiles the innocence of a child. Breaking down such a delicate barrier, Stephen King is really able to reach for your heart and squeeze it. While he may look cute, Gage is an animal, and kills in ruthless ways. When Rachel leaves Ellie behind, she is guided subconsciously by Pascow.
Since Louis didn't listen to his advice, he seeks the hope that Rachel will heed his warning. Only she ends up being Gage's second victim, and while her demise happens off screen, we still get to see the after effects of it.

When Louis awakens to find that his friendly neighbor Judd, and his wife have met their end at the hands of his now-evil son, Louis again, does what any man would do: kills his son, burns his neighbors house down, and buries his wife, saying that she hasn't been dead long enough yet to come back messed up. At this point in the film and story, Louis has gone mad, and actually plans on picking up his life the way it was, nevermind the fact that Rachel only has one eye now, and she's rotting. But his plans don't work out in the end anyway, because Rachel makes Louis her first victim. I remember seeing Denise Crosby in her final makeup on screen for the first time, and I didn't sleep right for weeks. I used to turn my head every time it shows her at the end with her leaking eye and vehement grin. It wasn't until a few years of watching the film that I could brave fully watching the end.

"Pet Sematary" has the credit of being one of the only films to ever really scare me. Not only that, it was another lovely entry into the genre that I'd grow up to be obsessed with. It's creep factor is still intact, and it hasn't lost it's touch. I consider King to be one of my biggest idols but, I have to admit that I think the film outdid his novel in this rare case. Though the book has more details, and the ending is more open, I think the cinematic representation told the story better, and in an everlasting way. It remains one of my favorite horror movies of all time, and I recently bought the Blu-ray with the sweet holographic cover of Church.
If my house were burning down, and I could only grab a few movies before it all turned to ash, "Pet Sematary" would be one of the few picked. I've got memories with this movie, and I just genuinely think it's an amazing horror film. I also didn't mind the sequel, "Pet Sematary II", although it's nothing compared to the original.