COMPOUND FRACTURE shows the past can come back to hurt you 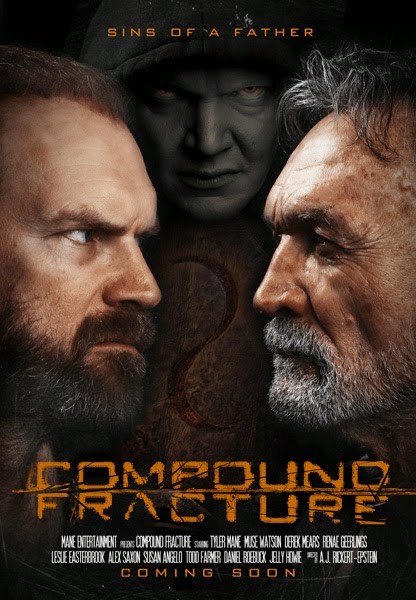 Synopsis taken from IMDb
Michael left home when he was a teenager and never looked back. Now, after the death of his sister, Chloe, he's returning home with his fiancee Juliette and his angst ridden nephew Brandon. On arrival, they realize that home isn't exactly what it used to be. With high walls surrounding the house and security cameras in every nook and cranny it's more of a military compound than anything else. Enter Gary, Michael's estranged father who, while happy to be reunited with his son and grandson, seems more distracted by other things. As the strange family reunion commences, an uninvited guest shows up and we learn bits and pieces about the real reason behind Chloe's death and why Brandon is so closed off from Michael. The fractured family will have to come together to fight the ghosts of their pasts and make it out alive!


The first thing that drew me to this motion picture was the cast. When I saw that it stared Tyler Mane (Halloween 2007), Derek Mears (Friday the 13th 2009), and Leslie Easterbrook (The Devil's Reject's 2005), I knew that this was one worth a viewing. The opinion of horror fans overall seemed positive, so that was another reason to check it out.


There's a good soundtrack attached to "Compound Fracture", I found myself enjoying the music. Most movies nowadays play music too loud over a scene, where as in this feature, we have good tunes that fit the mood, and are at an appropriate volume. Then you get Michael (Mane) meeting up with his estranged father, Gary (Muse Watson) which makes for some deeply layered character involvement and development. Michael doesn't get along with his father because he beat his first wife, Michael's mother, and he beats his current wife, Annabelle (Easterbrook). He also didn't help Michael's mother out at all financially while she died of cancer. It's explained that Michael left when he turned of age to go live with his mom, and he was left to take care of her with not a penny's worth of help from Gary, who's very rich.

Annabelle decides she can't take anymore of Gary's abuse and gets Michael's consent to leave. However, up until this point, Michael, Gary, and his step-mother have seen a strange silhouette and their family symbol in various places, including written onto the bathroom mirror. Earlier, we're shown how Gary has a safely secured panic room. But rather than think it'll get put to use, everyone simply thinks that Gary is loony. But as the viewer, you can easily see that although he does have alzheimer's disease, he's still got sense to him. So you know the panic room will eventually come in handy.

As the movie progresses, we get the full scope of what happened with Michael's sisters death, and how it all went down. We learn that Michael was forced to take drastic actions against his brother William (Mears), and we learn why Michael's nephew Brandon is so emotionally distraught. Although things went down in a non-civil way, what they didn't expect was for that day to come back to haunt them all, and threaten their lives. They're all being malevolently haunted by William now, who wants blood for blood, and intends on picking them off savagely in taking his own revenge. I didn't expect it to happen during daylight though, so that makes this film unique.

Packed with a good quality of gore, special FX, and good acting, I was really into it. So much so that I surprised myself. There's one hell of a decapitation scene involving a van door that is easily my favorite kill of the entire movie. Though it's not very scary or suspenseful, I still found it intriguing because it's a character driven story. And there's a sad but triumphant twist ending that I didn't expect. There's some good action scenes involving fights, and the violence is a nice touch. "Compound Fracture" isn't what I expected, nor did it end the way I foresaw. Though it's not a perfect movie, it's surprisingly entertaining and has a creative story.