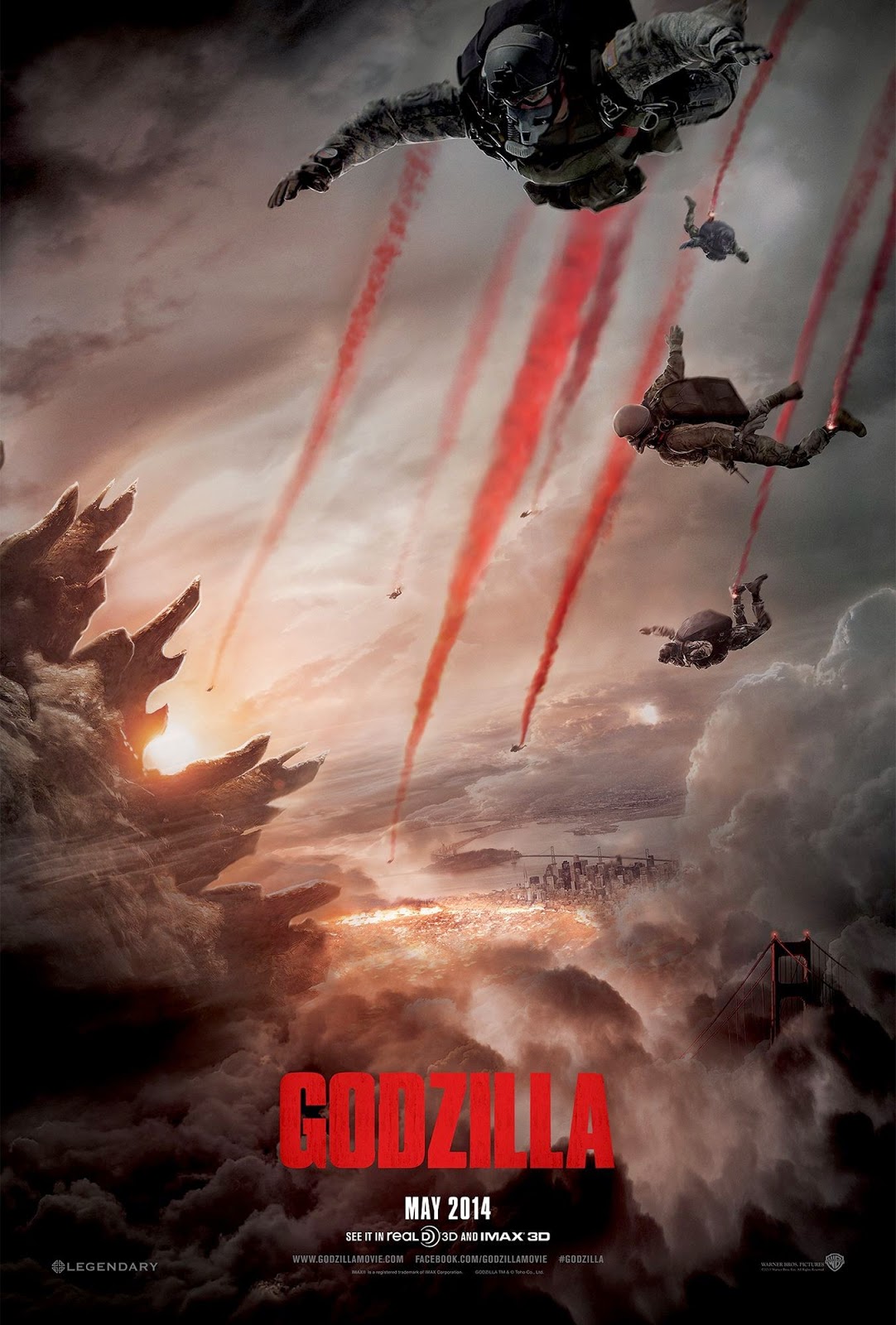 Me and Dani Carnage go back a bit, and aside from being a well-known blogger, he's become my friend. For only our second time, we're doing crossover reviews. This time, it's of the blockbuster reboot of "Godzilla". His review is published below. To read my review, go visit his blog here: Grimm Reviews Godzilla (2014)

Let me first make a statement before I begin my review of Gareth Edwards' Godzilla.The 98 film never happened. That abomination to all things Kaiju was a stain upon good old Gojira, and one that many thought had forever tainted anything to do with Godzilla that would come afterwards. Well, how very wrong were we. Gareth Edwards' Godzilla is a Kaiju fanboy's wet dream. While Pacific Rim whetted the appetites of Kaiju nuts everywhere, Godzilla sits firmly above it as the true king of all monsters. Everything about it screams classic, from the plight of the humans battling odds they know nothing about, to Godzilla saving humanity. This film really does have it all.

I have seen many complain about the lack of Godzilla in the film. I felt he was in it enough, and the film managed to balance a human story and blend it with huge monster battling sequences and some incredible scenes of disaster that looked amazing in 3D. This film is truly breathtaking in every sense of the word. And When Godzilla did something he hadn't done for many years, it brought a tear to my eye. Godzilla is back, and is bigger and badder than ever!

The film moves along at such a brisk pace that it is impossible to get  bored. Teases and glimpses of Godzilla fighting each of the M.U.T.O (Massive Unidentified Terrestrial Organisms) are spread throughout the movie, and they lead up nicely to an end battle that will have everyone on the edge of their seats. Plus there is a sly nod to older Godzilla films, in which a glass tank has the word 'Mothra' on it when father and son visit the forbidden zone in Japan.That really made me smile because after the King Ghidora, Mothra is my favourite Godzilla foe.

The roar is there, the atomic fire breath is there. The incredible monster design is there. Both the M.U.T.O'S and Godzilla look incredible. When CGI is used in this way, i have no complaint about it what so ever. And there is a look that Godzilla gives before destroying one of the M.U.T.O'S that just made me want to get up and cheer. He looks incredibly pissed at this moment, and lets out a sigh, and you know he is going to bring the pain to his opponent. To exude such emotion from a CGI creation is incredible, and i applaud the filmmakers for this amazing feat. It helps that the cinematography is incredibly personal, as we see the M.U.T.O's paths of destruction through car windshields, on TV's and in the background as people attempt to escape from the destruction they are causing.

The sheer scale of Godzilla is enough to take anyone's breath away. This is the biggest and meanest he has ever been. Just take the skydiving sequence for example. It is played out in silence, and the flashes of the battling Kaiju are fantastic. You really get a sense of enormity of the creatures, and it made me so happy to see Godzilla whooping ass once more.

Don't listen to the haters. Godzilla is back, and hearing this film is actually part of a trilogy, means he is going to come back again and again. This film is everything a childhood Godzilla fan could want, and those who bemoan a lack of Godzilla or too much of a human story need to go back and watch some of the older films, as there are some where old Goji doesn't appear until the last twenty minutes of the film. The plight of humanity has always been a strong point in Godzilla films, and why anyone is moaning about it now, I have no idea.

Enjoy this rebirth of the king of all monsters. Welcome him back and enjoy what could be the best film of 2014. Godzilla is back, and he's here to stay (at least for another two films)!