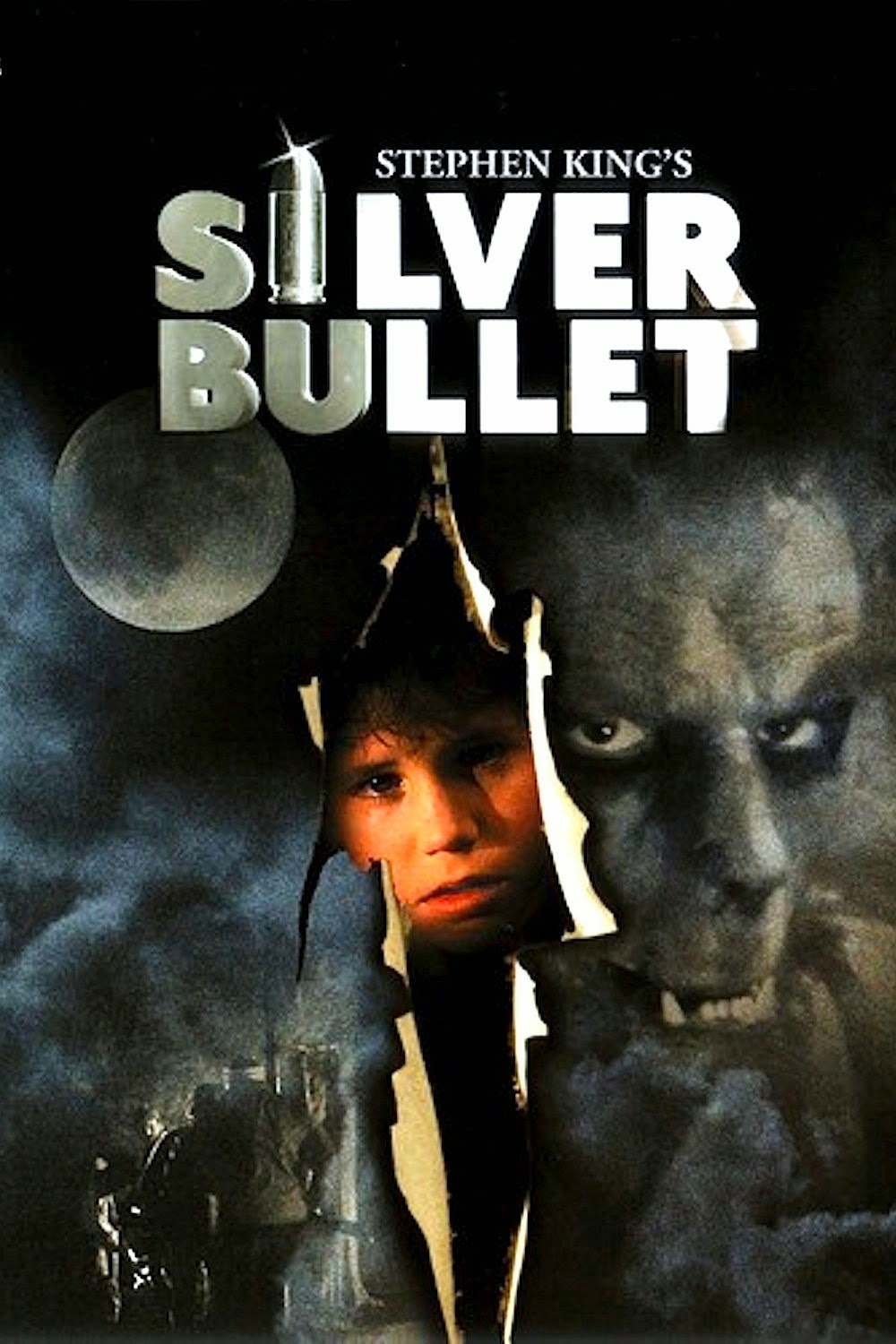 Synopsis taken from IMDb
A werewolf terrorizes a small city where lives Marty Coslaw, -a paralytic boy- his uncle and his sister- the narrator of the story.


Unlike the film I reviewed last Thursday, I actually grew up with this one, and have a lot of memories of watching it as a kid. It's one of the movies that I have some sentimental value for, and is easily the most heartfelt werewolf film ever. I can relate to this film on a personal note, because like Marty, I was very close with my sister. And it often felt that it was us against the world, and it was rough at times. But we rode it out together and somehow came through okay, similar to Marty and Jane's situation.

Whenever a film comes from the 80's, and has Stephen King's name on it, you know you're in for a treat. Such is the case with the classic horror film "Silver Bullet". Based after the short novel by King, titled Cycle of the Werewolf, the motion picture does the fiction story justice for the big screen. I actually just read the book only a few years ago, but it became an instant favorite of mine. And believe it or not, I liked it more than the movie. It's better in the way that films can't match books, but they're very close.

The lead characters, Marty (Corey Haim) and his sister Jane (Megan Follows), are a unique pair. They represent their differences in age (Marty is 11-years-old, and Jane is 15-years-old) with constant bickering and back and forth nonsense. But in the end, it's their bond, and the true love they have for one another, and the will to live, that saves their lives. I always thought the acting was genuine and endearing, and well played for such young actors.


Jane, being a teenager and trying to find her individuality is held down and burdened with taking care of her brother constantly, by her parents command. And Marty of course, has the displeasure of being crippled, and feeling like an outcast. Great character story that allows the audience to get behind and support them, and even causing some emotional attachment. We need more well-written characters like this in today's movies.

Gary Busey plays Marty and Jane's uncle Red, and easily my favorite character in the film. He plays a vital part, both because of his personal issues (alcoholism, a divorce, etc.) and because of his relationship with Marty. Uncle Red is a realistic character, we all have someone like him in our family somewhere. He's cool because he's the tough guy, but he's got his demons. I've always liked Busey's performance as Uncle Red, and think it's one of the best films he's done in his career.

Almost every character in "Silver Bullet" is likable, and that's just not how it is nowadays in cinema. You really felt the community of the small town, and the wholesome neighborly love. And you understood the fear as townsfolk start getting brutally picked off. Now, there's a few character's that aren't likable, but that's always to be expected. And it's not because of lame dialogue or bad acting, it's because the characters challenge our opinions, causing us to take sides of who's right and who's wrong. And where does justice end and revenge begin.


When thinking back on movies that I've been a fan of for so long, it's the little details that remind me how well I know the movie. For example, when I think of "Silver Bullet", the opening scene with the beheading, followed by the cockroach getting run over by the train comes to mind. The small caring town that's suddenly plagued by a bloody savageness. I even also recollect where Marty's friend Brady, died on Harmony Hill. I know this flick like the back of my hand, and I could go on and on about it.

I like that it takes its time, setting a good pace with a good score to set the proper mood. And the mystery aspect is top-notch. Not knowing who the werewolf is was a good, because knowing how tight the town is, you just knew it was going to be a shocker. After Jane goes around collecting cans from everyone in town, it become obvious that it was going to be Reverend Lowe (Everett McGill), but that didn't take away any suspense. It just made things more intense.

After finding out he's the werewolf, Marty and Jane send him nasty letters telling him to kill himself. Whatever their intentions were, they only pissed him off. And there's some great werewolf action, most notably when he attacks the woman trying to commit suicide and maws her back up with deep, painful scratches. There's also the suspenseful greenhouse scene in which he kills the rude drunk of the town. But easily the most memorable scene is the infamous "peace maker" scene, where Reverend Lowe attacks several of the townspeople and beats the local bartender to death with his own baseball bat, that's later found in Lowe's garage by Jane.


Unlike most werewolf films, the werewolf in "Silver Bullet" is conscious of his actions, and only targets the sinners in town as his victims. This is his way of justifying what he does. In most werewolf films the beast is uncontrollable and can't think rationally. A scene that I hear talked about a lot is Lowe's dream, where in the church  everyone from the town turns into a werewolf. Which I can't deny, is a memorable scene to say the least. And despite there being blood and gore in the film, it never goes overboard and remains entertaining without becoming gross.
Even the scene where Marty shoots Lowe in the eye with the firework, while graphic, doesn't take things too far and is done in a tasteful way.

After an attempted run at revenge by Lowe in a thrilling chase scene, Marty gets away a second time, but to no avail, uncle Red still thinks he's making it all up. Even despite Jane now taking Marty's side. As a team, Marty and Jane have their necklaces melted down into a silver bullet. One round of deadly ammunition for the hairy beast.

The full moon comes out on Halloween, and just in time, uncle Red gets Jane and Marty's parents out of the house by giving them two tickets for a getaway in New York. Tickets he said he won, but lied just so he and Marty and Jane could have the house to themselves incase Reverend Lowe shows up. And when Lowe does show up, it's an intense battle until the last minutes of the film, when Marty uses the silver bullet to shoot Lowe in his good eye, and end the reign of his brutality.


"Silver Bullet" is a class act of a horror film, filled with everything you can think of, including big scares and jumps. I've always thought that this movie was underrated, but those who I know who have seen it, love it. Like most of Stephen King's work, it'll live on through the ages as a timeless classic.