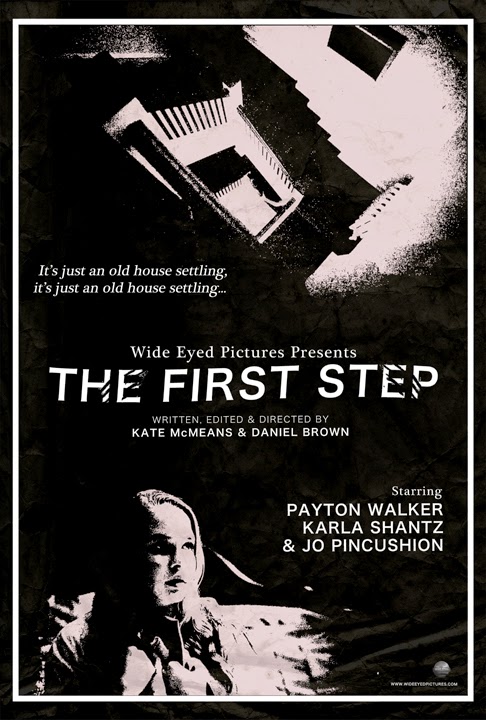 "Based on traditional campfire and bedtime ghost stories, 'The First Step' tells the short tale of Sara, who on her first night in a new house with her mother is tormented by a creature in the basement."

Coming from Wild Eye Pictures, this creepy tale is short and to the point. Though co-directors Daniel Brown and Kate McMeans say this is their first "real story in the genre", you can see that this is a horror film made by horror fans. Running about six minutes long, "The First Step" has plenty of time to creep you out and get right to the point. It's an intense ride, that's thrilling, and incredibly eerie. The creature's voice, and the noises (groans) it makes just kept me on edge and I found it awesomely unsettling. The creature's makeup FX could have been better, and I found it scarier when it wasn't focused in on, especially the stairs scene. Nonetheless, it reminded me of The Pale Man in "Pan's Labyrinth".

For a small budget and production, it definitely delivers. The fact that it manages to come off so suspenseful and dreadful is a big win. The acting is good, as is the overall simple concept. "The First Step" has not only reached film reviewers like myself, but also some film festivals. So, if you're into short films that will scare you with the lights out, keep your eyes peeled for this one. I'd bet that anyone home alone watching this wouldn't step foot in their basement afterwards...

Luckily, I don't have a basement (laugh).