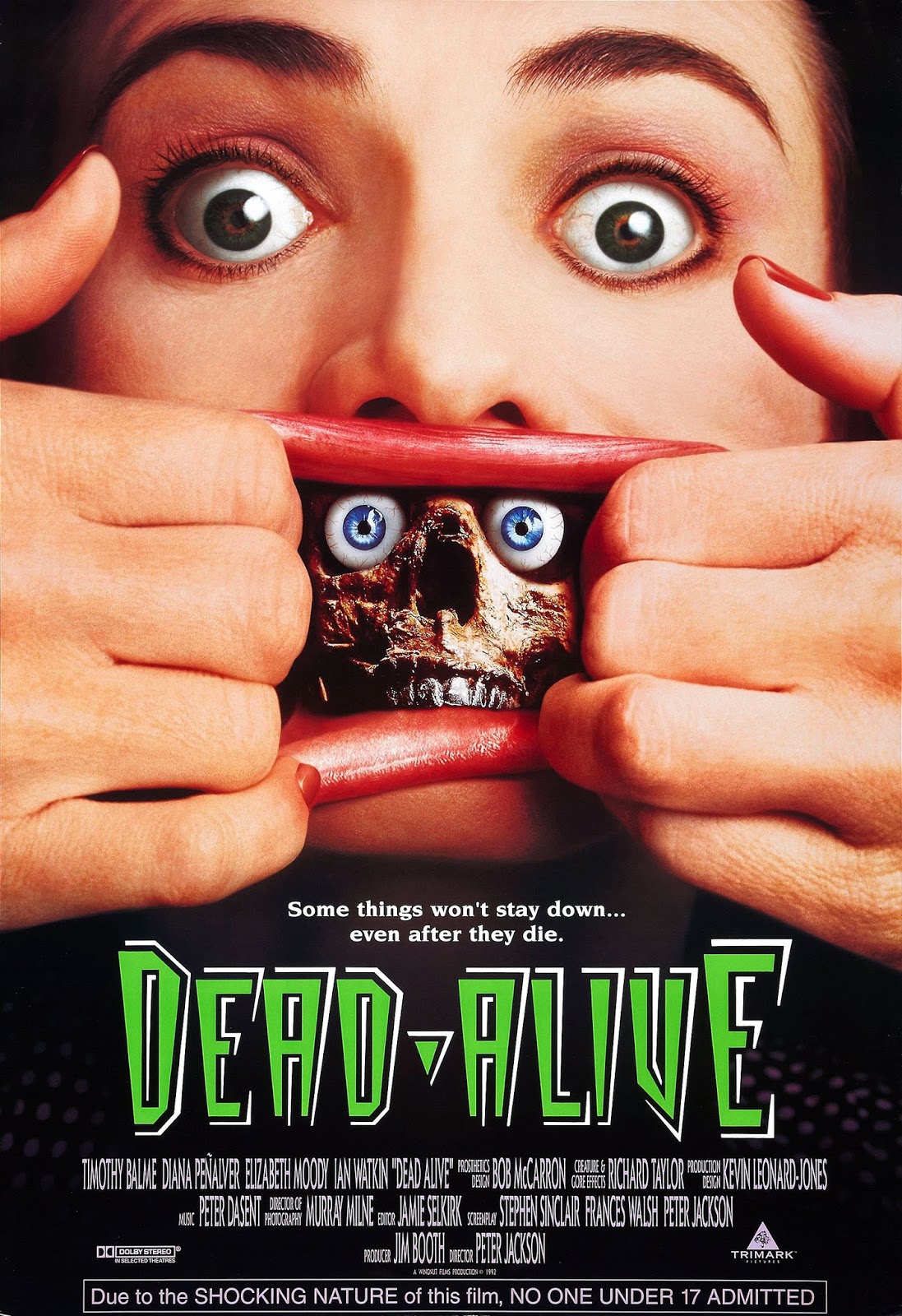 Synopsis taken from IMDb
A young man's mother is bitten by a Sumatran rat-monkey. She gets sick and dies, at which time she comes back to life, killing and eating dogs, nurses, friends and neighbors.

Peter Jackson's "Dead Alive" is one of the elite films in a handful that I can watch at anytime, no matter what the circumstances, no matter what my mood. It partially has to do with the fact that it's got a little bit of everything in it. But mostly, it's because it's just a fun and enjoyable movie. This flick has attached to it a rarity, when people watch it, it gets all sorts of reactions. Laughs, gags even, and screams. It's an all around blast of a horror movie.

This is just one of the horror genre pictures Jackson has done. He's also the man behind "Bad Taste" (1987), and "The Frighteners" (1996). That's right, the man now known for the "Lord of the Rings" trilogy once tackled the horror genre. And if we're lucky, he'll make a gory return someday.

The New Zealand gore-fest has countless memorable quotes and scenes, starting with the Sumatran rat-monkey. The stop motion animation isn't something that's forgivable to pull off nowadays, but back then when horror was fun, it did just the trick. The rat-monkey hails from the fictional  Skull Island, the same location King Kong originates from. Peter Jackson has openly stated that the original Kong film is his favorite movie, ever since he was a child. And you can see it reflect in his work.

It's funny how despite how gross and bloody this flick is, it's still not as harsh and cruel as films by today's standards. It wasn't about pain and torture, it was about enjoying yourself and having a good time. And the opening says all you need to know about what you're getting into.

There's not a lot of character development, and it's not a character driven motion picture. However, the characters are completely likable, and even relatable to a certain extent. It's not so much that you're dreading what happens to the main characters as much as you're looking forward to seeing how they get out of their predicament. When Lionel's (Timothy Balme) mother, Vera (Elizabeth Moody) is savagely attacked by the nasty little rat-monkey, it ceases any progress that Lionel and his new girlfriend, Paquita (Diana Peñalver) are working towards. Though the intrusion was intentional by Vera, the rat-monkey taking a piece out of her arm wasn't. Lionel crawls back inside of his shell and tends to his mother, ignoring the outside world and Paquita.

Things only go from bad to gross as Vera's condition worsens and her skin starts to peel off. Not to mention one of her ears. Her refusal to lay in bed and rest, is responsible for possibly the nastiest scene in the entire motion picture: the 'custard' scene. As her bite wound aches and pusses its way into her and Lionel's guests desert, it invokes all sorts of reactions from the viewer. Most often people turn their heads, or they look in awe with their had over their mouth. Like it or hate it, it's one of the most memorable scenes from a gore-fest film ever. Only to be rivaled by the infamous 'lawnmower' scene towards the end of the picture.

Lionel tries as hard as he can to contain his mothers condition, but that proves to be an impossible feat as he loses control of his mother and the situation. After viciously snapping a nurses head back, and half off, he now has another body to watch after once it too becomes re-animated and blood thirsty. But he still keeps it a secret until a priest and punk rocker get added to the collection of zombies courtesy of Vera. Lionel even uses tranquilizer to keep the undead in his basement safe and sound. Then comes the baby that is procreated by none other than the nurse and the priest. With all of these living corpses stuffed in his dank basement, he soon can't control them anymore and is blackmailed by his uncle Les (Ian Watkin).

After agreeing to give up his inheritance from his deceased mother, Les agrees to keep Lionel's secret. But he makes Lionel take care of the zombies in the basement, a task that Lionel screws up terribly. He accidentally gives all of the living dead a poison that is actually an animal stimulant. So seeing as all this started from a monkey bite, the corpses don't die, they have even more energy. Busting down the basement door and crashing uncle Les' housewarming party full of his friends and colleagues, things get really gory. All this leads up to the unforgettable aforementioned 'lawnmower' scene.

As Lionel breaks out of his shell, he fights back in the most unconventional of ways; he attacks the now houseful of living dead by shredding them to pieces with his trusty lawnmower. What goes down is easily to this day, still one of the goriest scenes in motion picture history. The entire house is nothing but crimson, body parts, and wet chunks. But the fight doesn't stop there, because the main villain, Vera, doesn't show up until the final few minutes of the film. Only she's now monstrously tall, and completely mutated. Upon threatening Paquita, Lionel finally takes stand against his mother and kills her.

Lionel and Paquita walk off together leaving the gritty aftermath behind them as we hear the baby conceived by the nurse and priest, screaming in the fire. I find all of the scenes with the baby to be awesome, especially the 'park' scene in which Lionel tries to act as though it's a normal baby, but to no avail.

In the end, "Braindead" is a film that will be talked about for ages to come. It may not hold its appeal to younger fans nowadays as it does to those of us around when it came out, but it's a solid movie never to be forgotten. It's one of those ones that it's as easy to sit through as it is hard to watch at times. And to think I only summed up the film, I could go on and on with this one. The moral of this review is that if you haven't seen this movie yet, you need to fix that asap. And if you have seen this one, then thanks for reading, doing so shows your fandom for this classic.