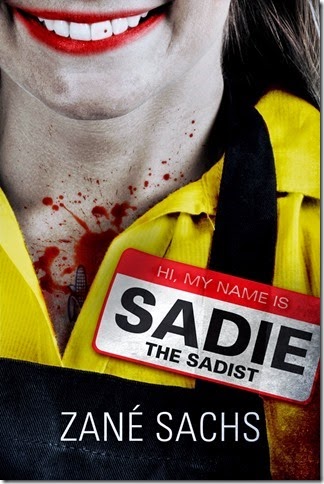 Like many people, Sadie feels undervalued and frustrated. Employed by a supermarket, she plots to murder coworkers--or lore them into the employee bathroom for a quickie. Sick of being treated like a robot, she taps into a powerful (and deranged) alter-ego and transforms into Sadie the Sadist.

Author Zané Sachs tackles the topic of a middle-aged woman named Sadie, who could be your next door neighbor, and who is tired of her common and boring life. She shucks corn at her place of employment; the supermarket, until her hands are in agony. And she gets demoted to being a bagger and collecting carts, after injury and having a fellow employee who she can't stand promoted to the management job Sadie wanted. While Sadie is completely lovable and funny as hell, it's apparent she's deranged, and has various amounts of mental issues. She's a pathological liar, and murderer, and a cannibal. My favorite parts in this fiction novel are the recipes.

After every chapter, Sadie give recipes including brownies, coleslaw, dip, and other goodies. Each laced with a little of sickness and Sadie's personality. Sadie starts spinning out of control very much in the style of American Psycho, where she doesn't even know what's real and what isn't, losing sight of reality due to all the craziness and psychosis going on in her head. The fault with this is that it makes her sloppy, and she's not the best liar in the world. So, when things get messy, she makes them messier, all while trying to stay under the radar of the police. She's a nymphomaniac, who's incredibly jealous of anyone who succeeds her in any way, rather it's someone taking the job she wanted (even though she lied about her credentials), or a male coworker liking another female more than her, or simply just ignoring her.

She resorts to some nasty lows as she even rapes a male coworker with a corn cob. The sex and violence are definitely graphic, but if you pick this book up to read, that means you're into this kind of detailed and macabre writing, otherwise you'd be in the children's section. Although it can be brutal in nature, it never loses it's sense of humor. The whole time I was reading it, I was thinking how ridiculous it is, but it's incredibly endearing. And Sadie is the girl you love to hate.

The ending isn't as I was expecting at all, so the element of surprise is always present while reading. And I swear, there were several times where I thought certain incidences were made up in her mind and were mere fantasies, and they weren't. And then there were times when I thought certain events were real, and they weren't. So it's a crazy ride going through Sadie's head and everyday life, but it's a journey worth taking. Especially if you're a sucker for good fiction books like I am.

The synopsis will tell you to beware because of the graphic sex, violence, and nature. And I'm telling you that if you're a horror fan, you've seen and probably read way worse. It does push the envelope, which is what I think Zané Sachs was aiming for when writing this, but it's more fun than anything. And I had trouble putting it down. I usually set 60-90 minutes aside everyday to read, and I can't tell you how many times I exceeded that time while reading Sadie the Sadist.

If you're looking for a good read that has a twisted sense of humor, you just found one. While I was given the kindle version from the author for a review, I actually plan on purchasing this in paperback, so I can have it on my bookshelf, and even pass it on to friends. To see if you have what it takes to read Sadie the Sadist, the purchase link is at the top of this post. And I recommend you click it.