'WITCHING AND BITCHING' is the best witch film since 'Hocus Pocus'

Synopsis taken from IMDb
A gang of escaping jewelry thieves get trapped by a coven of witches.


Like Vampires, I know a lot about witches and the mythology behind them. And, one thing that gets under my skin is how a lot of the time, witches are portrayed as beautiful women. That shouldn't be the case. I've heard stories of people being accused of witchcraft because of how ugly they are, and because of the way they dressed. Therefore, to me the stereotypical witch should look like older women, and not be very attractive, physically. That's one thing that Rob Zombie's The Lords of Salem got right.

So, I went into watching Witching and Bitching  with high hopes and an open mind, and I wasn't let down. From the start, you can see that it had a good budget, and an interesting opening credits scene gets you prepared for what's yet to come. We see a man dressed as a silver Jesus Christ, acting as a moving statue, and he robs a jewelry store with helpers dressed as SpongeBob SquarePants, Invisible Man, a soldier and Minnie Mouse. There are a lot of laughs to be had in the early goings of this Spanish horror-comedy. The silver Jesus, José (Hugo Silva) has his son with him through the burglary. No better way to spend a custody day, right?

As José is on the run in a destructive car chase, he's receiving unpleasant calls from his son's mother, who knows he's up to no good. On their way to France, José and his two pals who made it out of the robbery alive, stop at a tavern in Zugarramurdi, a Spanish border town with a reputation of being heavily influenced by witchcraft. The whole scene much reminds me of a particular scene in An American Werewolf in London. Those who are in the bar don't seem overly polite, and we soon discover that it's owned and run by witches. The film comes off very sexist towards women at first, but as it progresses we see the big picture. As it turns out, the coven of witches want José's son, and they practically drool over him. 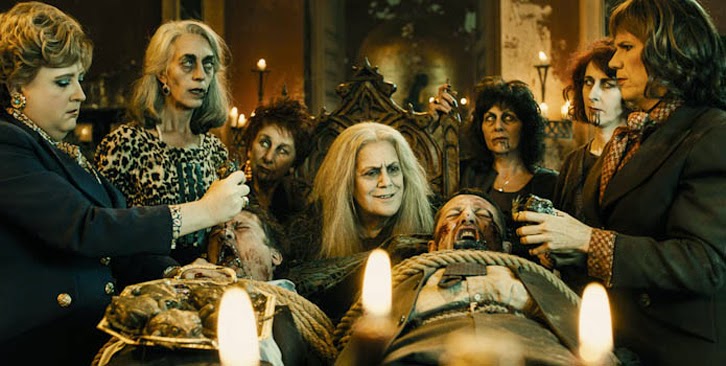 After leaving the bar in somewhat urgency, the trio of men and José's son flee the joint at high speed, they soon see one of the mysterious women from the bar in the middle of the road, and plow into her. Nothing comes of this aside from them discovering that her body has disappeared, and they breath in some funky powder that was obviously part of the plan that they're easily falling into on behalf of the coven. Then unbeknownst to them, they pick up the daughter of the witch they just hit, and drive her home after finding her walking along the road. When they all arrive at the witches abode, we see some serious classic witch stuff go down, and I am all about that. I enjoyed this movie from the opening credits, and it gets better and better as it moves along. José catches the coven trying to put his son in the oven, apple in his mouth and all, and again flees their sight.

Only this time, they realize they left their jewels from their heist at the coven's residence. So, they have to turn the car around, and try and get their treasure back by sneaking into the home of the coven. This is when we see that the witches can not only fly, but can crawl on walls and ceilings. The biggest mistake the robbers could have made was turning back, but it's all too late at this point for regrets. The trio of men end up tied to chairs at a big dinner table, and as it turns out, the coven are having guests over for dinner. And, after holding a ceremony, they attempt to roast the male's.

Then, we find out that José's son is being used as a sort of sacrifice, and he's fed to their God (a giant obese woman) only to be re-birthed as the "man who will betray man", their version of the anti-Christ I suppose. And in all truthfulness, it gets even wilder from there... 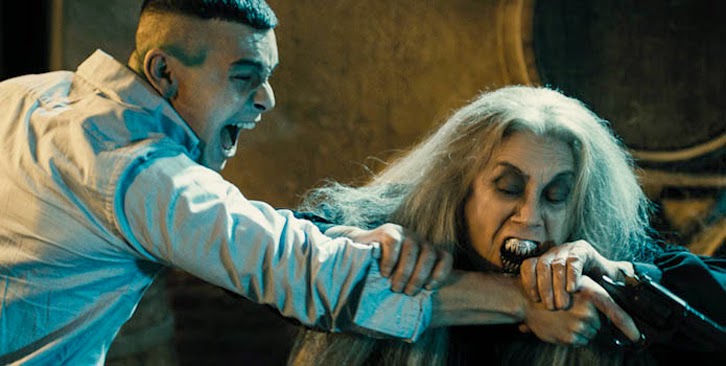 The witches look good, and the entire film is full of good characters and outrageous humor, as well as some unexpected special FX that are top-notch. If I had to sum this flick up, I'd say it's Hocus Pocus meets Drag me to Hell. It's worth a watch and definitely worth owning. I was happy with this movie, you'll get no complaints from me aside from the fact that I think once the special effects started taking hold that the story slowed down. But, nothing tarnishes the overall quality of Witching and Bitching. It's quite superb.