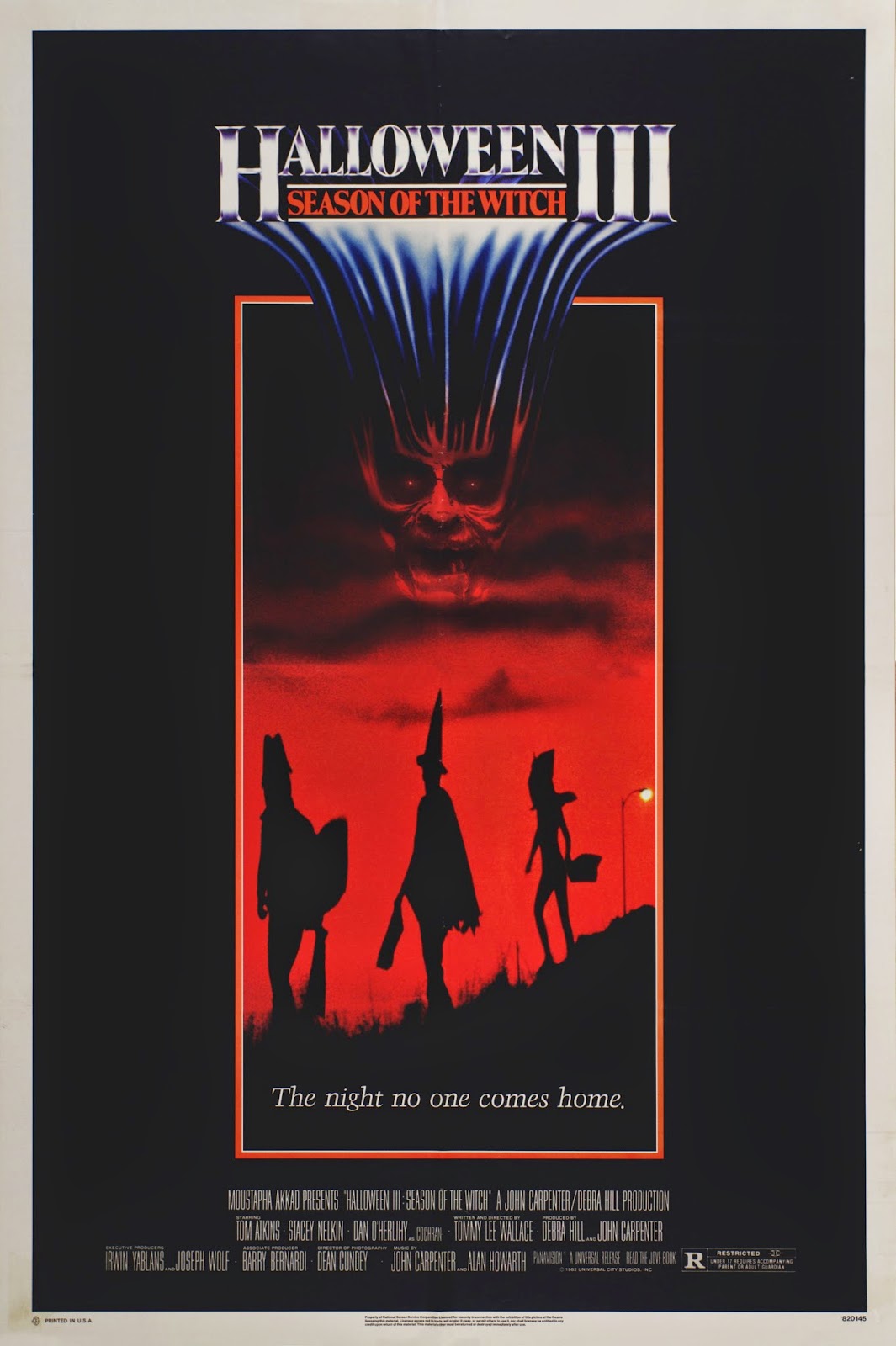 Synopsis taken from IMDb
A large Halloween mask-making company has plans to kill millions of American children with something sinister hidden in Halloween masks.


I'll be the first to admit that I was one of the many people who thrashed this film upon seeing it the first time. After John Carpenter's 1978 smash hit Halloween landed, we were given a less than worthy sequel just three years later. And although Halloween II was fair, it left a lot more to be desired about Michael Myers. Then, just one year after it's release, we're given Halloween III: Season of the Witch, which has absolutely nothing to do with Michael Myers or the first two films. So, yeah, a lot of people were severely let down, like myself. But, the fact that there was no Myers in it completely blinded almost everyone to how good the third film is as a stand-alone feature.

See, director Tommy Lee Wallace and genre legend John Carpenter had decided that it would be a good idea to use the Halloween title as a series name for a bunch of movies that take place on the holiday of Halloween. Then, any of those movies which did well could then have their own sequels. It was a get-rich-quick scheme that failed miserably, and we got Myers as the sole focus again in the fourth installment, Halloween 4: The Return of Michael Myers, a whole six years later.

It wasn't until recently that I've sat myself down and forced myself to re-watch Season of the Witch, to see if I could view the movie as it is, and not compare it to others. And after, is when I officially called myself a fan. Tommy Lee Wallace has spoken on the title and how it's not related to the Myers storyline. He said that the movie would have never gotten made had the marketable 'Halloween' not been in the title. So, I get the reasoning, but it's still a disappointment for two reasons:


But, a lot of people like myself are finding the movie again for the first time and liking it. Will that be the legacy this movie leaves behind? Much like Edgar Allen Poe's poetry, it failed in it's time, but has found an audience years and years later. What I'm getting at is, Halloween III is an unappreciated gem of a horror film. It's a shame I didn't see it through clear eyes sooner. But, the Silver Shamrock song still gets under my skin after hearing it for the ten-thousandth time...


Just eight days before Halloween, Harry Grimbridge (Al Berry) is sent to the hospital after passing out in a gas station from running from strange men in business suits. He was holding a Halloween mask from the Silver Shamrock company in his arms when he blacked out. While he's in the hospital, one of the men in suits who were chasing him to the gas station find him and kill him. Prior to being murdered, he was repeating "They're going to kill us. They're going to kill us all." Letting us know (as if we couldn't catch on quickly) that the suited antagonists are indeed the villains. After Grimbridge is "taken care of" the unnerving suited man goes to Grimbridge's car and burns himself alive inside of it, causing an explosion.

Dr. Daniel Challis (Tom Atkins) and Harry Grimbridge's daughter, Ellie (Stacey Nelkin), end up in a town of Santa Mira, while investigating Harry's mysterious death and the strange man who burned in his car. Santa Mira is the home of the Silver Shamrock factory. Silver Shamrock are responsible for making the hottest and most sought after Halloween masks on the market. The factory is owned by an Irishman by the name of Conal Cochran (Dan O'Herlihy), who is the reason the town is so prosperous. Challis and Ellie discover that Harry had stayed at the hotel they're at currently.

Their neighbors are Marge Guttman and Buddy Kupfer, along with his wife and son. And, what do all of them have in common? They're all on their way to the Silver Shamrock factory for their own business, and they all end up dead at the hands of those at the factory. The Kupfer's die the same day that they get a tour of the factory, and they bring Challis and Ellie along as their guests. This allows Challis and Ellie to pretend having interest in the mask making process, and really snoop around looking for anything suspicious that will lead them to answers.


Soon after, Ellie is kidnapped by the suited men who keep popping up to keep things in order. This of course, means that Dr. Challis has to break into the mask-making factory and find her. Only, he ends up caught and beaten up by one of the men in suits (Dick Warlock) who he learns are drones, and gets tied to a chair while Conal Cochran spills the beans on his plan to murder millions of people. There's a computer chip on trademark on the masks that each contain a fragment from Stonehenge, and when the Silver Shamrock commercial airs on Halloween night, it will cause the chip to activate, and kill the person wearing the mask and those around them. Reducing them to insects and snakes. Cochran explains how it's all a sacrifice for a witchcraft ceremony.

In the end, Challis is able to rescue Ellie and they both flee the factory. Only we're hit with a major plot twist; Ellie is a drone created by Cochran. After listening to several interviews with the cast and crew, no one has officially said whether or not she was a drone the entire film, or if it happened once she was kidnapped and before Challis rescued her. Then, we end up where we began, at the gas station in which we saw Ellie's father at in the opening of the film. From the gas station, Challis calls television stations demanding that they remove the commercial from the air with urgency. He screams and he screams, and it ends.

Both director Tommy Lee Wallace and actor/ladies man Tom Atkins have been quoted at saying that although the films ends in a cliffhanger, the TV stations do indeed stop the commercial from airing.

If you're going to watch this, I highly recommend watching it via Shout Factory's Blu-ray release, the picture and sound are perfect, and the bonus stuff is packed with informative goodies. In the end, Season of the Witch has almost no gore with less than the first two Halloween films, but it packs on the intensity and is a good story nonetheless. This will be getting watched by me on or around October 31st this year. I'm glad I've rediscovered this ignored classic.

BEST SCENE: I'm gonna give it to Little Buddy Kupfer when he watches the commercial during a "test screening" of the commercial. I've heard that the due to the amount of crickets used in this scene, it was impossible to track down and catch them all after filming. They eventually had to leave the building because the chirping of the crickets was driving everyone mad.