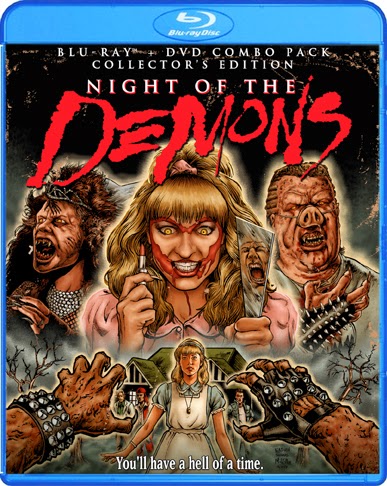 "Night of the Demons" is easily my favorite 80's horror film. I fell in love with this one the night I first watched it. It's scary, funny, has nudity and sex, some bad acting, and some gore and cool makeup FX. If that doesn't sum up the entire 80's era, I don't know what does. This movie is everything that made movies awesome then, balled up into a nice little terrifying package. So, when I had gotten the news that Shout! Factory were the ones to be releasing the blu-ray, I couldn't have been happier. Shout! has done incredible jobs on all of their releases, and I've found myself to be quite the addict when it comes to collecting their movies.
I couldn't have asked for anyone better to release this blu-ray. 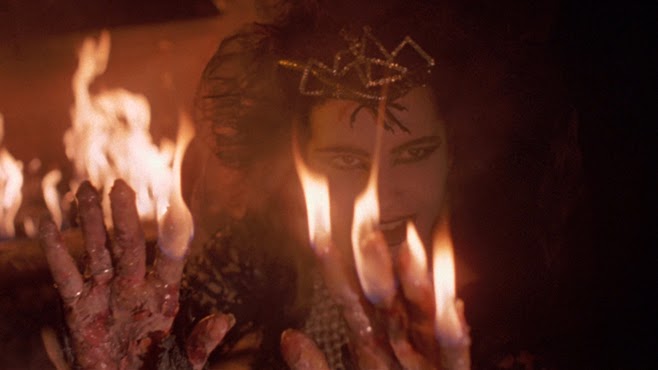 Cover/packaging: Shout! Factory always provides the coolest covers you can imagine, and this one is no exception! Their artwork by Nathan Thomas Milliner always sums up the film with the cover, which makes the covers newer and cooler, yet done in a way to look old-school and retro. The slipcover is presented with his beautiful artwork, and the jewel case has a reversible cover where you can pick between the new cover or the original cover art of Angela holding the invitation. The artwork on this particular release is probably my favorite one to date. So no complaints from me on this front, other than the fact that I think Angela should have been front and center, and not Suzanne.

Picture quality: From the start you can see how crisp and restored the picture is. The colors are very rich and vibrant, and the clarity is amazing. This is by far the best way to view the film ever. The makeup FX are showcased better, and certain scenes really stand out as almost astoundingly crystal clear. Most notably, the scene where Angela and Suzanne are ripping off the convenience store is pristine. The overall quality is fantastic, and it's like watching the film all over again for the first time.
If you're like me, you still have a soft spot for VHS tapes and their quality, if only for nostalgia's stake. But, there's no denying the epicness of seeing a film you cherish updated to this kind of quality. Truly impressive.

Sound quality: The fact that this is a collector's edition and not some cheap hack copy just for the sake of releasing it on blu-ray, says it all. The sound is incredible! Now, it's hard for me to say whether or not it's perfect, but it's damn close. Crank this baby up and watch it with total clarity, it's amazing. The voices of the possessed, and the screams, and running is all amplified and updated very well. Again, I've got no complaints. I particularly noticed the sound in the scene where Angela is dancing. For some reason, even though I knew it was coming, I still got creeped out. Go figure.

Bonus features: I had previously owned the DVD version that's out of print now, and all of the features that were on it, are on this blu-ray plus tons more. It's a crazy feeling when the excitement you once felt for a film hits you again, and you have hours of bonus material to watch that you've never seen before. Needless to say, I've watched this blu-ray from back to front and didn't skip a thing.

For starters you get two (2) commentaries now. You get the same one that was on the DVD with director Kevin S. Tenney, executive producer Walter Josten, and producer Jeff Geoffray. And you get a new commentary with the director Kevin S. Tenney and actors, Cathy Podewell (Judy), Hal Havins (Stooge), Billy Gallo (Sal), and FX artist Steve Johnson. Both commentaries are informative and insightful and absolutely worth a watch.

Next there's some new interviews with director Kevin S. Tenney, writer/producer Joe Augustyn, and my favorite scream queen Linnea Quigley. I was surprised because most films that have two commentaries and a surplus of bonus stuff including interviews tend to become redundant and repetitive. Not the case with this blu-ray. All the information you hear on both the commentaries and interviews are fresh, and never gets boring or repetitive. So yes, watch them and learn! 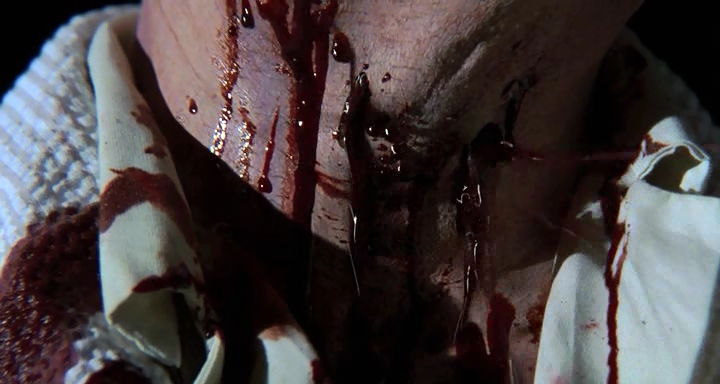 Final thoughts:  I really don't have a single bad thing to say about this release. As a huge fan of this film, I'm completely happy. Aside from wishing there was a statue or action figure of Angela included, there's nothing negative I can say. I'm a satisfied customer. If you have second thoughts about buying this, don't hesitate. With good packaging, picture, sound, and hours of bonus material, there's nothing to think twice about. Shout! Factory knocked another one out of the ballpark.