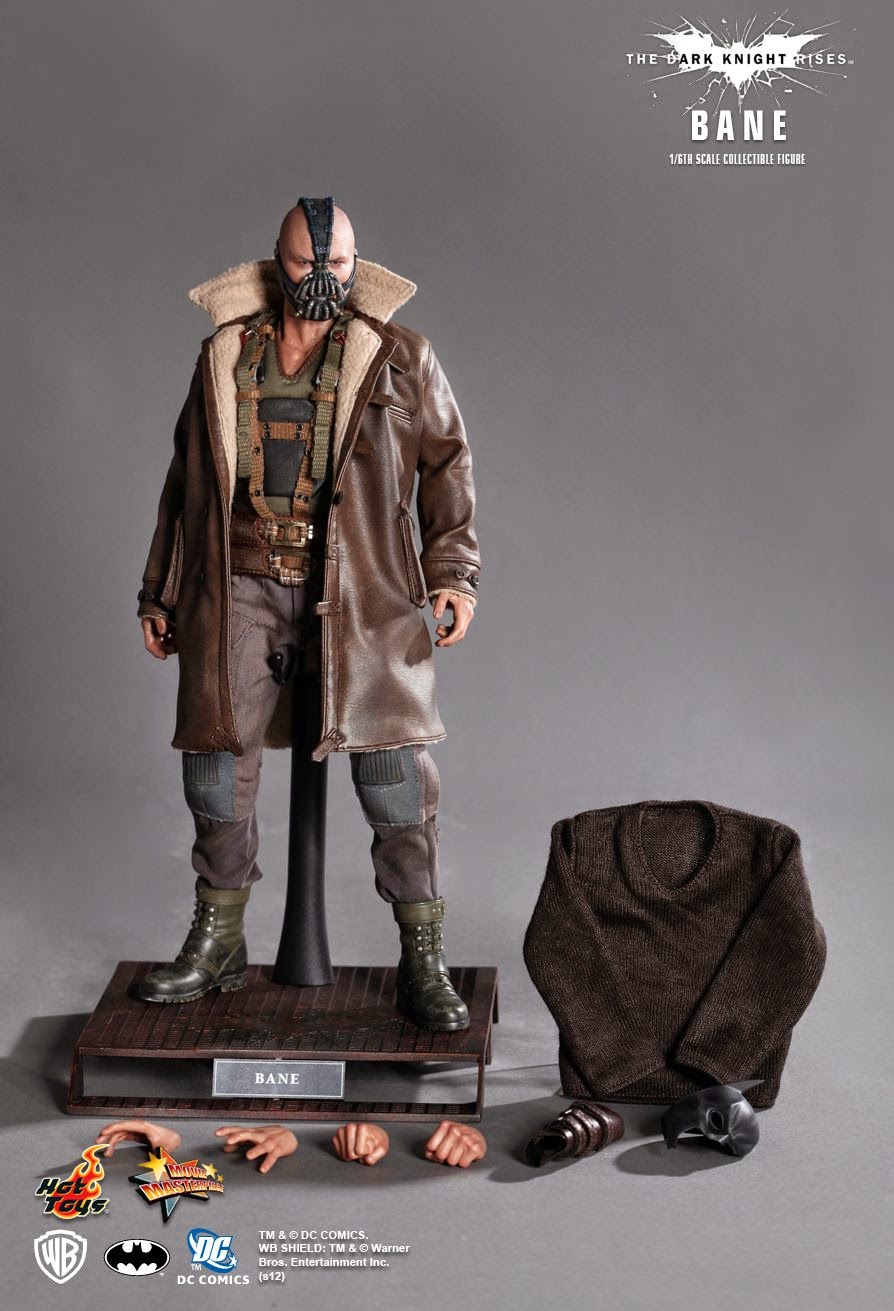 Easily one of the most realistic action figures to date that Hot Toys has done, Bane makes an incredible eye piece. And in my opinion, is a landmark figure. I mean, there's people who didn't even like the movie or the character of Bane and yet they bought this figure. That tells ya a little something about the quality produced on this piece. It's one of the few action figures that to the naked eye, looks like a real person. If you have a proper background or setting that doesn't showcase that it's a collectible, and not a real person, it's hard to tell the difference. 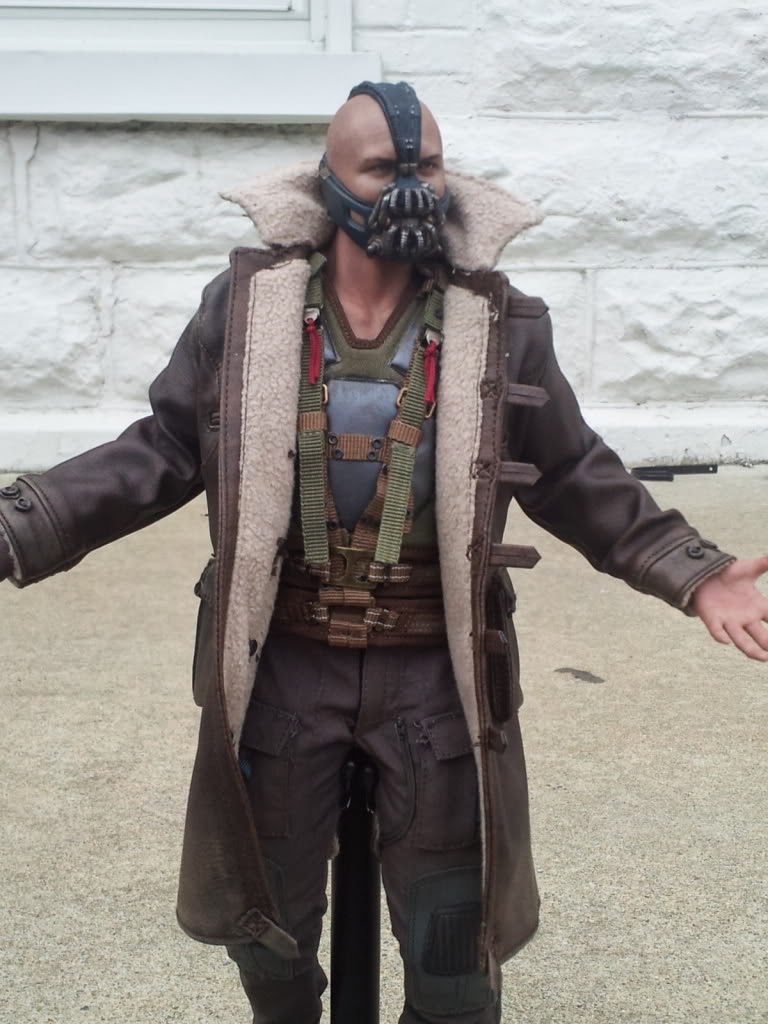 He's a very simple and basic figure. He comes on a muscle body, to beef him up compared to other figures. While the overall build and frame of the figure looks nice, the muscle bodies limit articulation/movement. So while he may look fantastic, there's certain key poses (like his boss pose) that just aren't gonna happen. But, there's plenty of other things that you can do for a pose that would set this figure off right. He also comes with five sets of interchangeable hands, a broken Batman cowl, a really sweet base/stand, and a movie accurate coat.

So you see, it's not an action figure that comes with a surplus of accessories. It's nothing fancy, but it looks incredible! The Tom Hardy likeness is ever present in the eyes and what you see of the face. But, it's the small details that make this figure pop. Such as the scaring on the sides of his head and the intricate detail in the mask. There's even some scarring on the eyebrow if you look close enough. Right out of the box this bad mofo is good to go. It's the rare case of that perfect figure that just sets some people in disbelief. 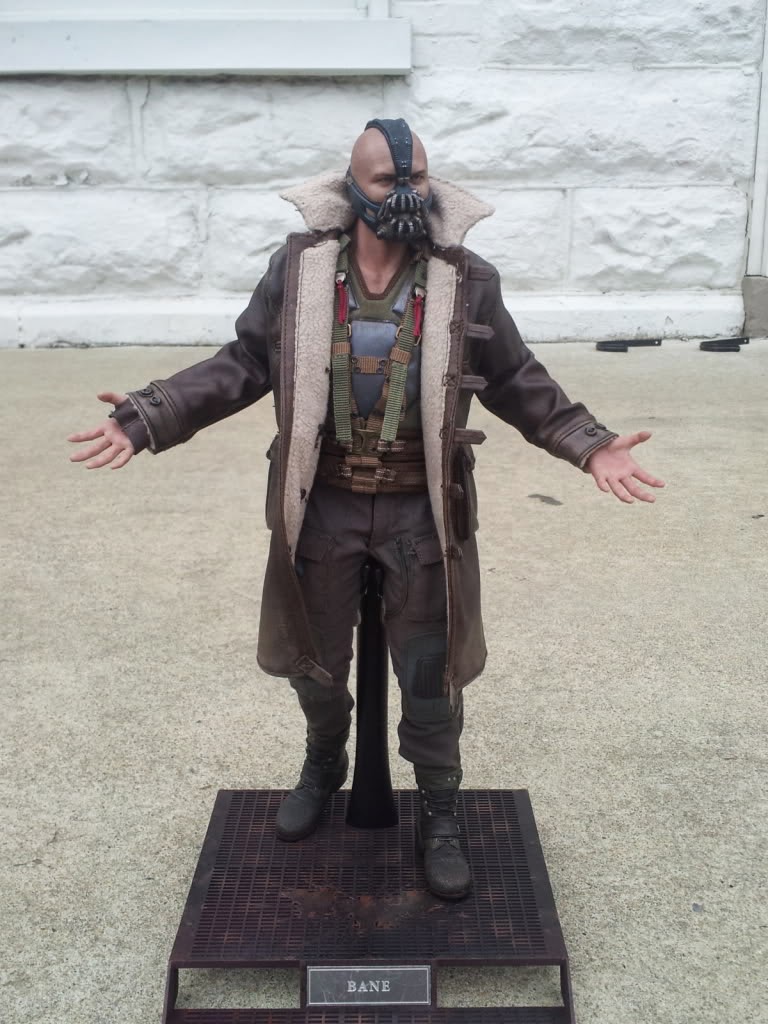 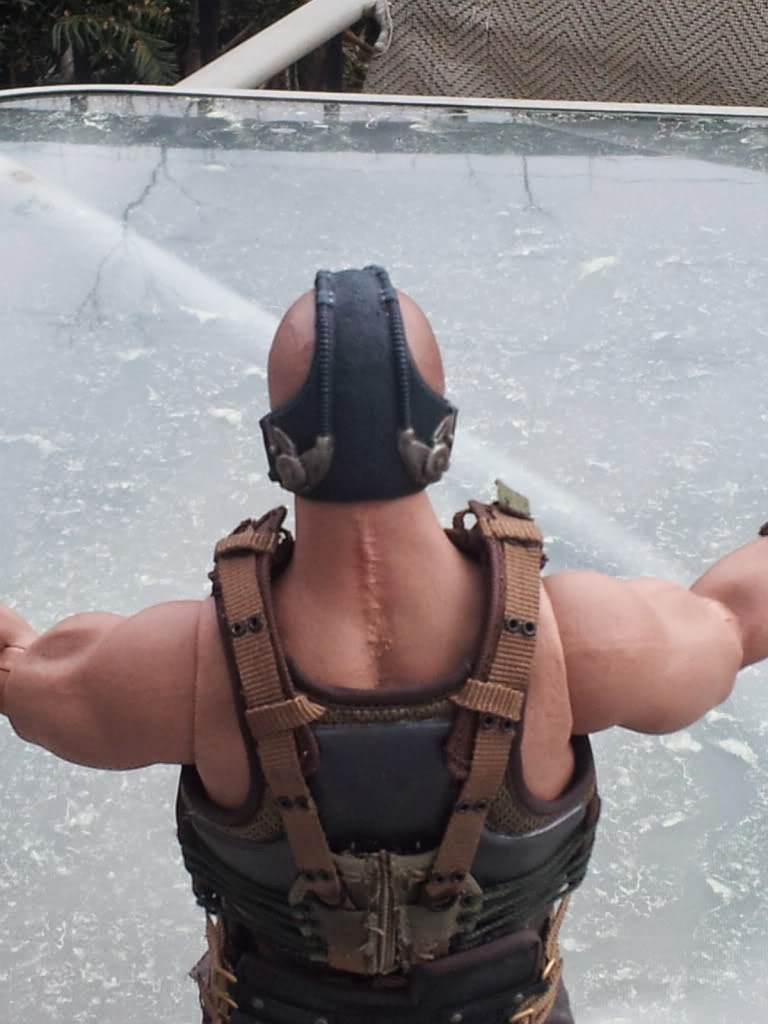 I've said this before about some of Hot Toys' other products, but I think that he's so well made due to the lack of accessories. When you have a $200 price tag on something that doesn't come with a lot of extras, they gotta make the money worth it. So the realism and overall quality of this piece beats tons of figures that I can think of that came with an abundance of accessories.

There's also scaring down his back, but most of all, what I like best is how his body is painted along with his head. Most companies stick a head on a default body and that's that. Well Hot Toys painted the entire body and head with the same skin coloring and texture to make the overall appearance seem seamless, and it's a wonderful job. One of my complaints about the figure are that I wish he came with the microphone headset from the football scene. Posing him talking into that would have been an amazing idea. I've seen some people make custom headsets, but it doesn't fit my level of quality, so I'll stick to no headset than a crappy forged one.

Aside from that, the figure looks best with the coat on because without it you can see joints and that prevents it from looking as realistic as possible. So I don't think I'll be taking his coat off again outside of taking these pics. Without the coat, the figure doesn't look as good. 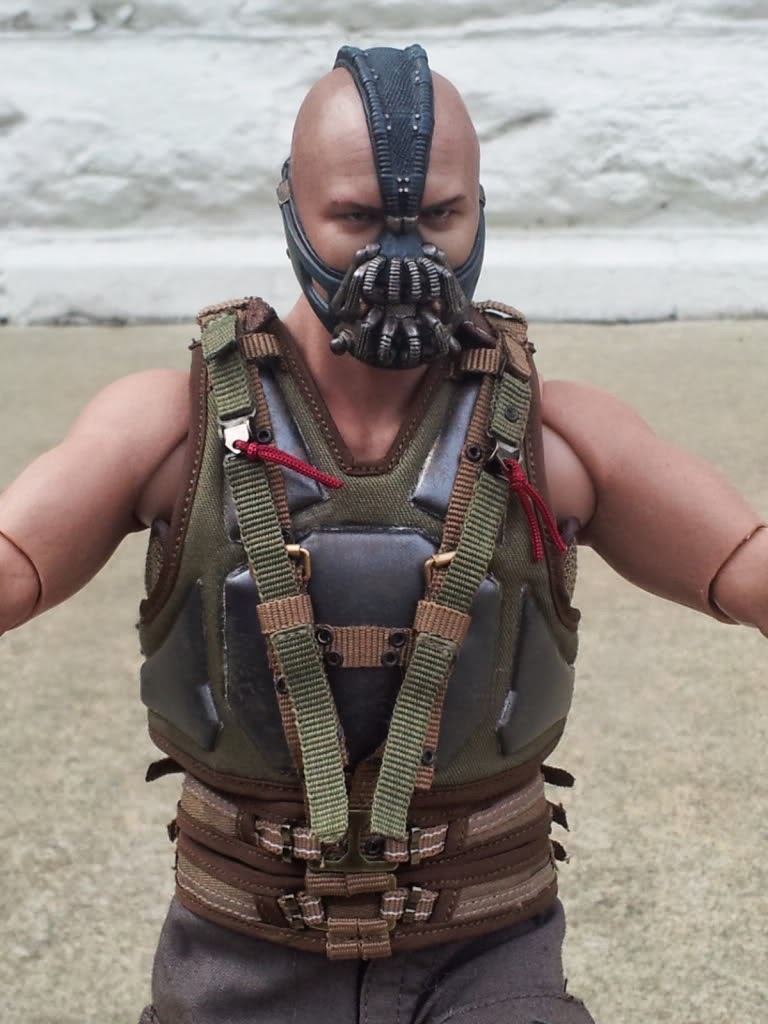 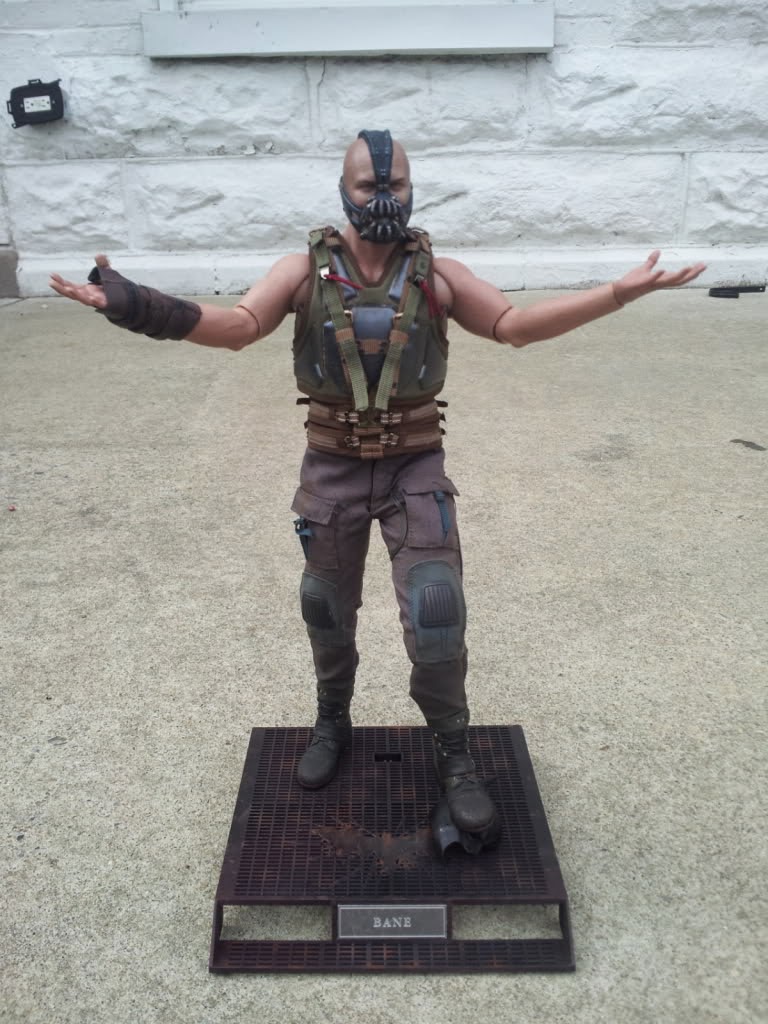 Everything from the vest down to his military pants looks amazing. He even has two wrist cuffs, so all five sets of hands that he comes with are compatible to fit the cuffs. One's meant for a closed fist and the other wrist band is for open hands, allowing you to make any pose you want to work and not look forced.

"The Dark Knight Rises" may just be my favorite installment in the franchise, but even if you hate the movie, you just simply can't deny the quality Hot Toys brings when they're on their game. I'm a proud owner of this figure. It's one of the ones I'll never part with. 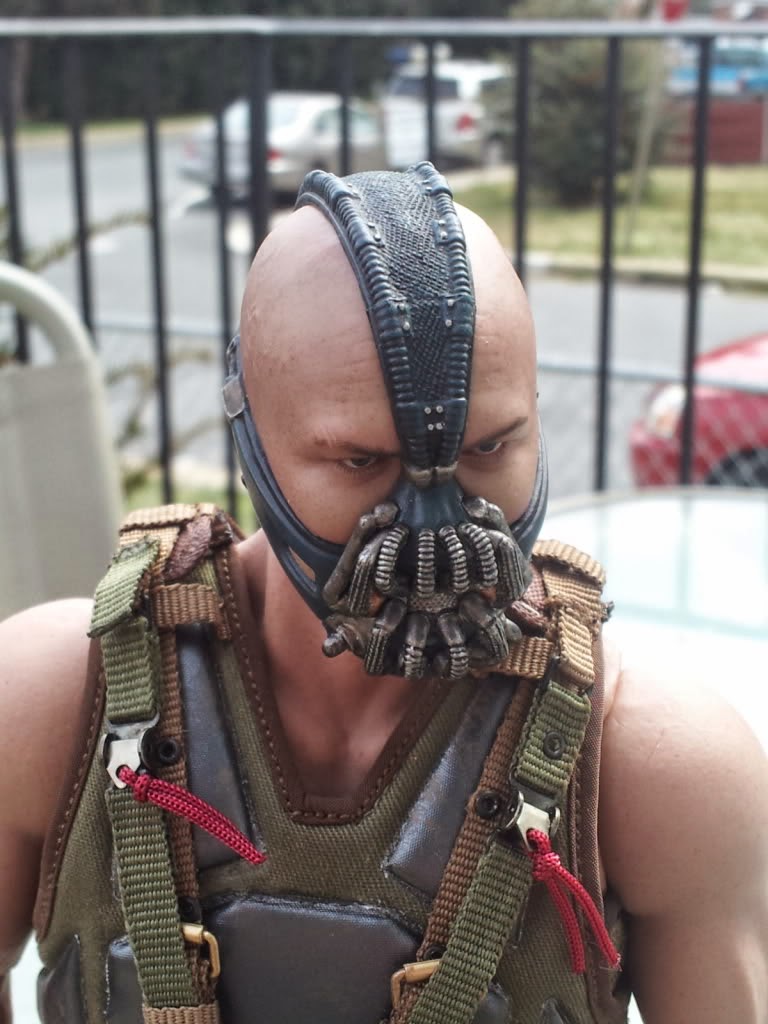 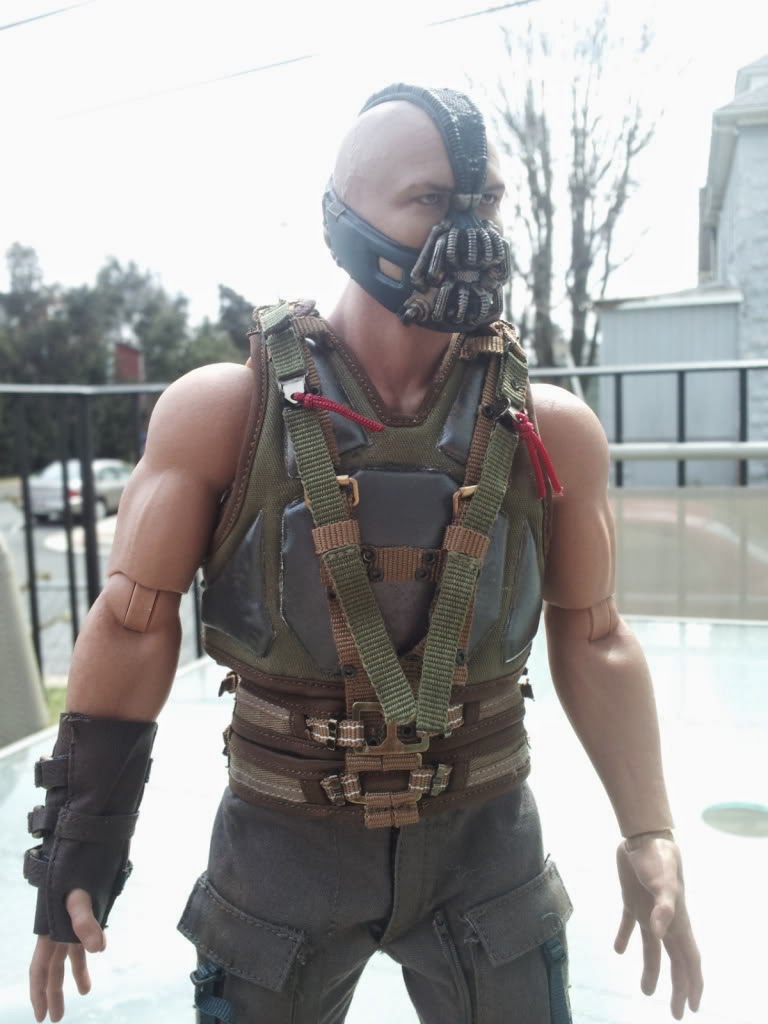 He's been long sold out, but if you can find one for a lucky price I suggest you grab it. This is one for the ages. I got mine off of Sideshow Collectibles, like I usually do. As far as I've heard he was a limited edition figure with a limited production run. I can easily see this action figure going for a fortune in years to come.