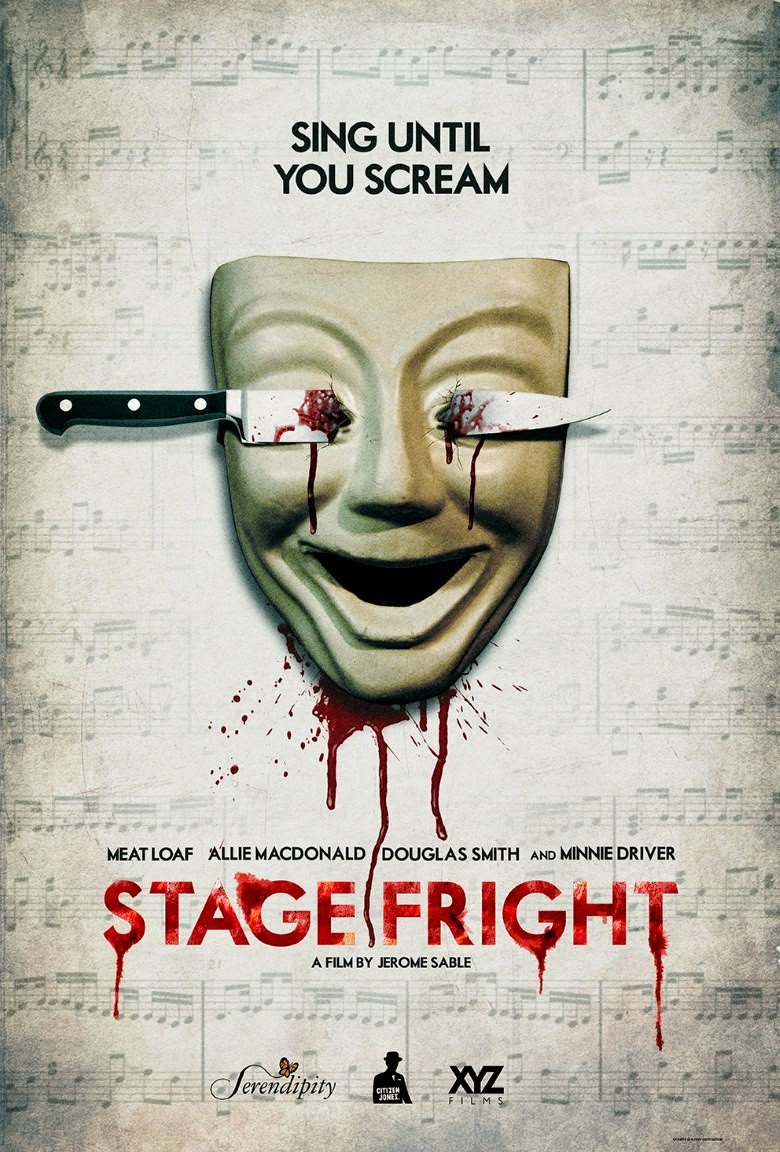 
Having never seen Alfred Hitchcock's 1950 original film of the same title, I had little to go on and had almost no expectations going into this version of "Stage Fright". I watched a trailer for it when I saw it was on VOD, and that was enough to get me to pay to see it.

From the start, there's a brutal kill right at the beginning before the opening credits. The nature of the kill is sheer brutality, the sound effects, the blood, and the ruthlessness shown in the kill told me all I needed to know about this film: that it has an edge.

I'm not opposed to musicals, I actually like a lot of musical plays and films. So, all the singing didn't disturb me. I've heard this film described as "Sleepaway Camp" meets "Glee", which is an appropriate comparisson since it's a musical at a camp. But, I'd say it's more "Scream" meets "Glee", because rather than try to be scary, it comes off more cool than anything. One thing that is positively established in this film, is the feeling of an 80's slasher flick. Coming off like a modernized 80's era stabathon film, I still wasn't convinced that it was going to be a movie I'd enjoy due to how quirky it is. And we all know that the term '80's slasher' can be a good or bad thing.

Camilla Swanson (Allie MacDonald) is a cook at a musical theater camp, with her brother, Buddy (Douglas Smith). The camp itself is sinking, on the verge of bankruptcy. The stage producer, Roger McCall (Meatloaf) decides that in order to save the camp, he's going to bring back "The Haunting of the Opera", the same play that Camilla and Buddy's mother was murdered after debuting, 10 years ago. When Camilla hears that they're going to be bringing the musical back for a revival (this time a kabuki version), she auditions and gets the role after some despute with the director. Although Camilla thinks she's doing a good deed and honoring her mother, Buddy disagrees and doesn't think she should do it. 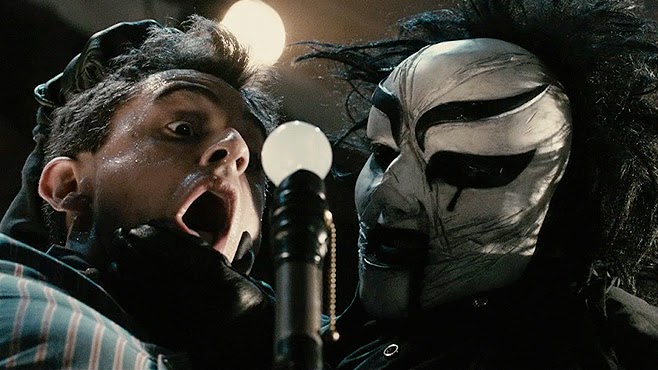 The director of the musical, Artie (Brandon Uranowitz) basically sexually harasses the females and blackmails them in order to pick which lady he wants to be the face of the musical. What aggravates me about this scenario is that no one ever says anything to him about it. They all just deal with it and act like they have to do as he says or else. Somehow the characters forgot they're only doing a small-time gig, and act like Artie's a big shot. When really he's the director of a camp musical. This got a "wtf" reaction out of me because these girls let this crude guy walk all over them and use them for the sake of a damn summer musical at a camp full of nobodys. So I find it unrealistic that their reactions are anything but cussing Artie out. These girls must have really been desperate otherwise...

While it's intentional, characters like Artie are all around the cast, making most of the cast instantly unlikable. And it kept me hoping that the lot of them would meet the blade of the killer (laugh). Without hardly any characters to back or support aside from Camilla and Buddy, I was taken out of the movie, and it lessened my experience watching it. And, my fiance pointed out a very funny element that somehow slipped my vision: most of the cast wears the same clothes the entire film! Guess everyone forgot their changes of clothes due to all the excitement of going to summer camp. Either way, small details like that irk me. But, I think that I was trying too hard to stay interested in the film to notice that detail on my own.

Now, let me talk about the killer. Whenever he shows up, the movie turns into a heavy metal horror musical! The lyrics are silly, but the music is enjoyable. He's twisted, violent, vicious, brutal, and relentless. However, the more I saw of the killer, the more ridiculous I thought he was. At one point he even gets out a guitar and solos in front of a victim before murdering them. Such goofy things don't really do anything for me but annoy me. He's very choreographed and stylized in his movements, making him an unrealistic character. As I said before, this movie tries to come off as cool more than anything. And I noticed that two saw-like weapons he uses are actually the tops of cans, which I actually laughed at. Had the killer been not as over-the-top as he was I probably could have appreciated that aspect.

Although several people are killed off, the play must go on, right? Right. With the impending doom of the killer showing up and killing Camilla like her mother, she still goes on stage and performs. The plot twist/killer reveal is easily predictible and nothing unconventional, but again you can smell the 80's slasher element this movie has. There's a secondary plot twist that I didn't find so predictible, but it's pretty flat. Once it's out in the open it doesn't do anything but make this movie mediocre at best.

There's some good, creative kills and gore. But I expected the quality of the movie to overall be higher. The movie climax is good, but nothing memorable. Ultimately the only thing that I can say is that I'm not impressed, but it's worth a watch. 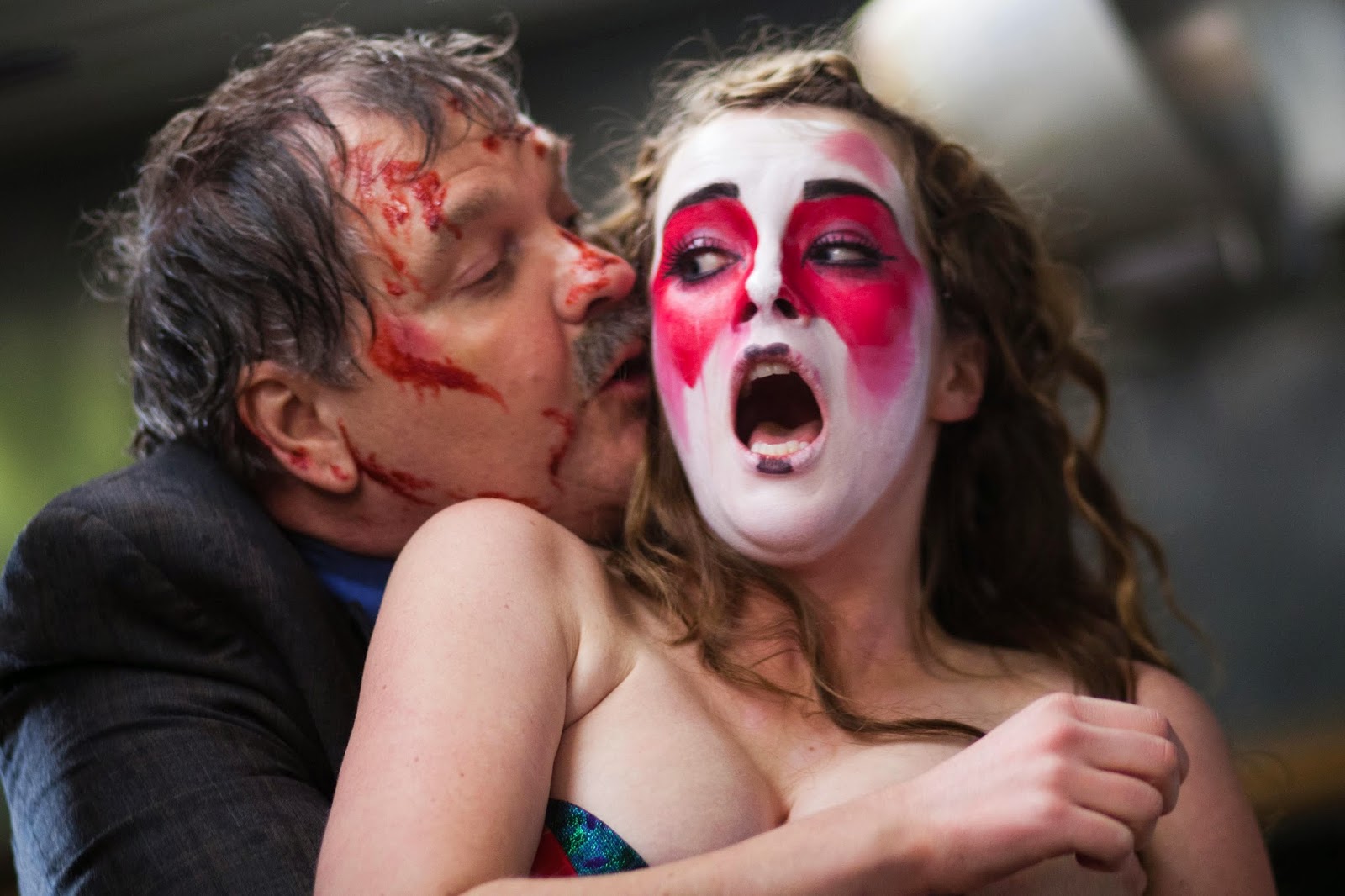 Catch it now on VOD or get to the theater May 9th to check it out.