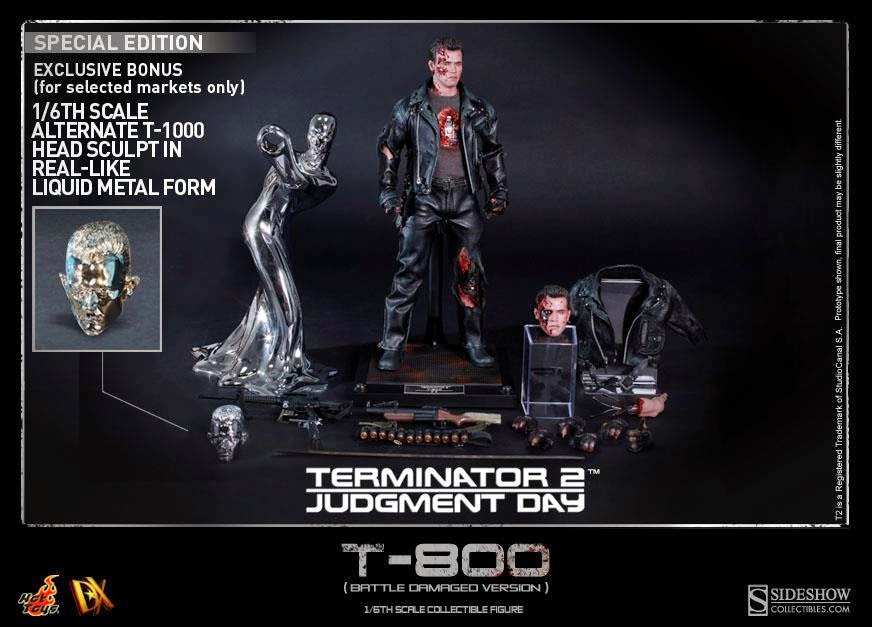 When "Terminator 2: Judgement Day" hit the silver screen back in 1991, I was a mere four-years-old. However, that didn't stop me from seeing the film. Thanks to my dad having great taste, I went to see the film about two times in theaters. I owned all sorts of action figures, T-shirts, and other sorts of merchandise. I knew I was a fan for life. There are movies that come and go, and some you just know are going to be around forever. I mean the film blew everyone away at that time, so imagine being how it was for me at the age of four!

It gives me great pleasure to show off this piece. Of all the pieces I own in my collecton, no matter how big or how small, this is probably my favorite piece if I had to chose one. With the attention to detail and such an extreme amount of accessories, this is truly what I consider a masterpiece figure. Funny, because before this figure landed all I heard were complaints from other collectors. But, now that it's been released, all I hear are good things. And rightfully so! 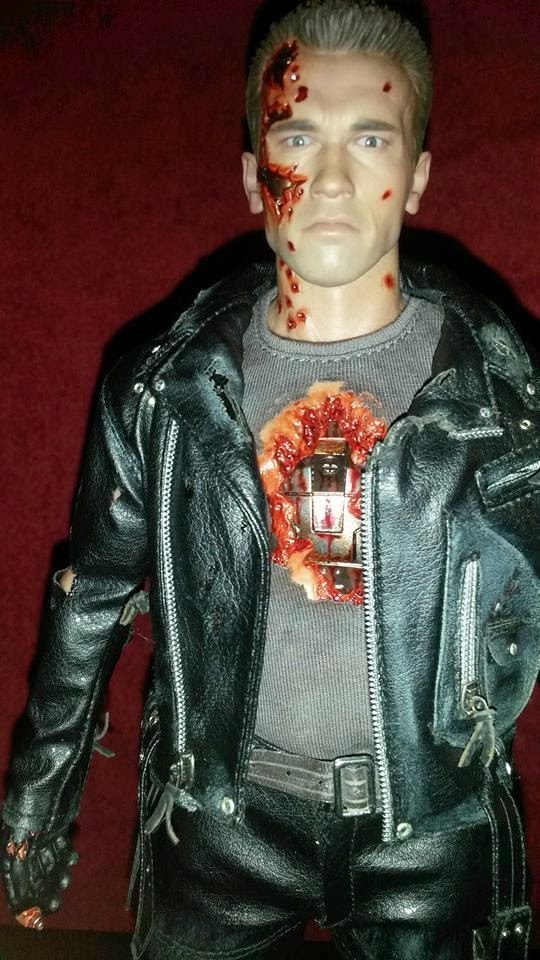 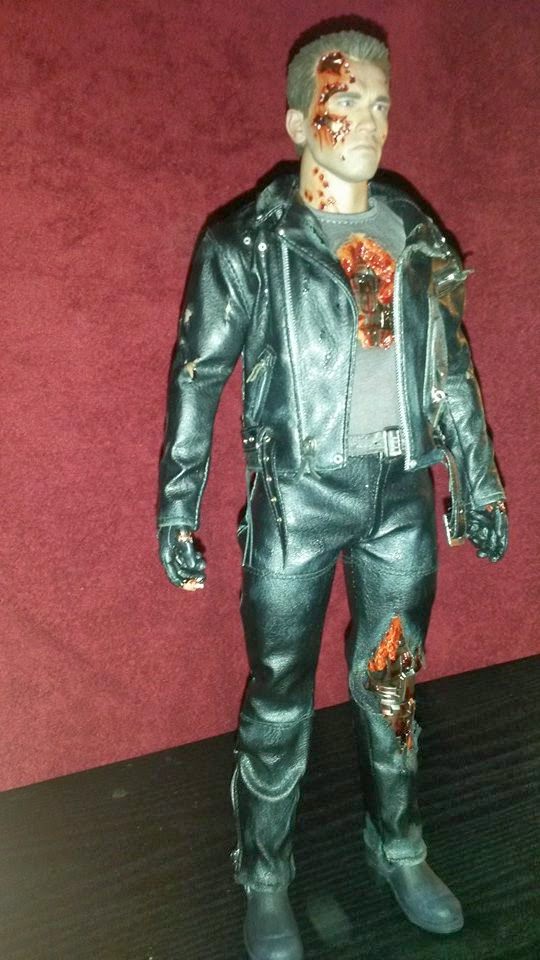 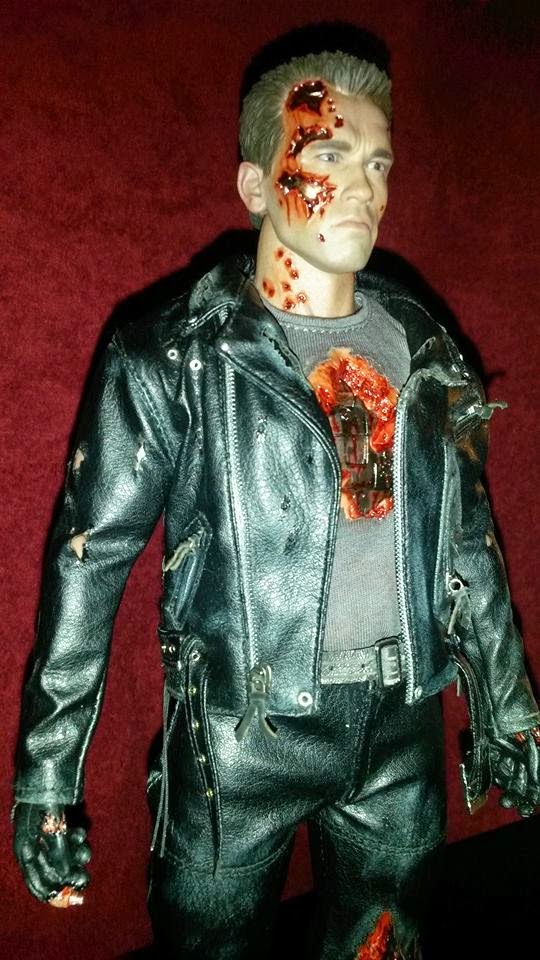 It took me to be an adult before I was able to get my hands on a truly worthy collectible from the movie. I've waited a long time for this piece to happen, and after an eternity of waiting, it's finally in my collecion. And I can now represent this film with the right kind of quality collectible that's only fitting for such an amazing motion picture.

This bad mofo comes with an advanced muscular body with over 30 points of articulation, allowing a good many types of poses possible. The body is very broad and large, and when comparing it to other figures, it's easy to see how much more buff and different the body is. It's like owning a tiny Schwarzenegger, and everything is proportioned right.

He comes with an arsonal of a grendade launcher, pistol, and a machine gun. It even comes with thirteen bullets that you can put into the guns! Not to mention that you get eight interchangable hands for holding all the different guns, a sweet base, an alternate battle damaged headsculpt with light up eye, two leather jackets, a severed arm that you can take off and put on him to alter his appearance. And it comes with a lot more, including a liquid T-1000 that allows you to pose them in combat! 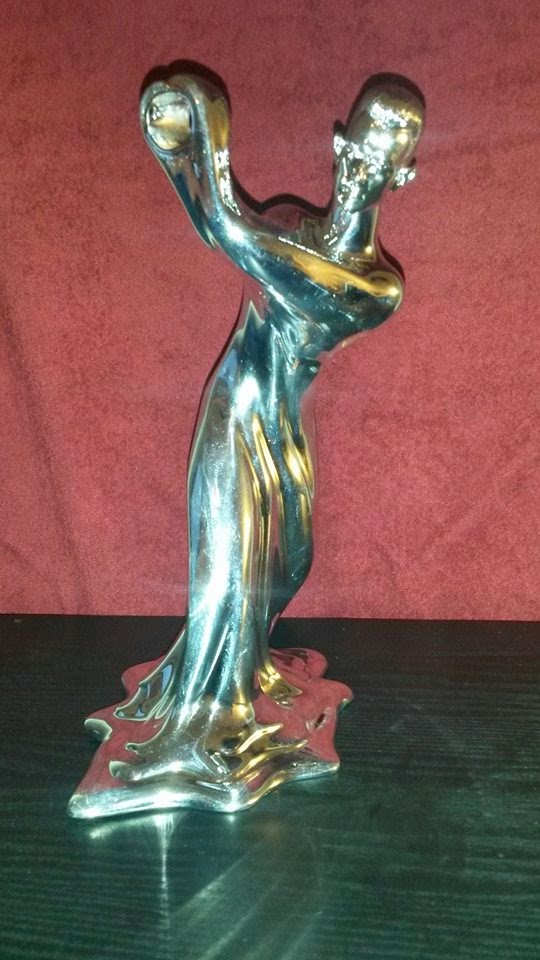 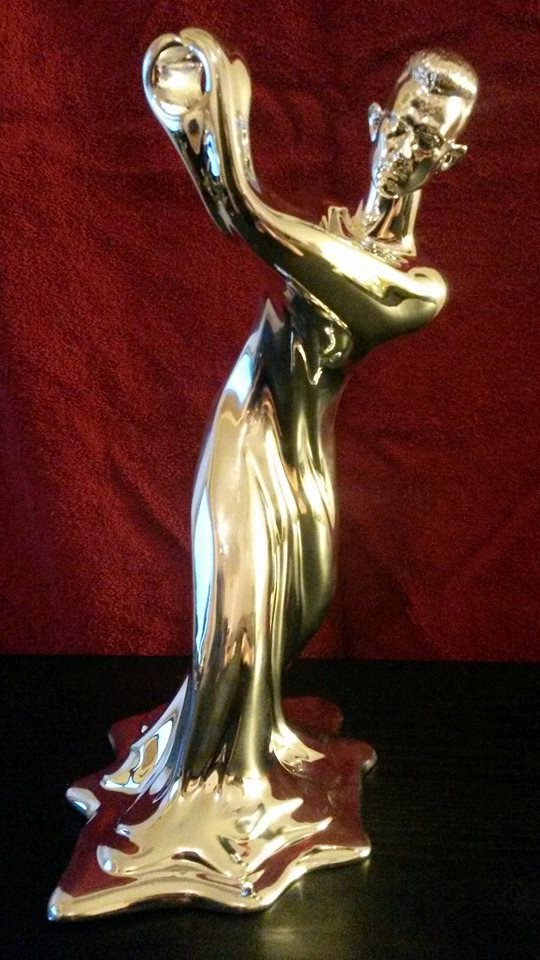 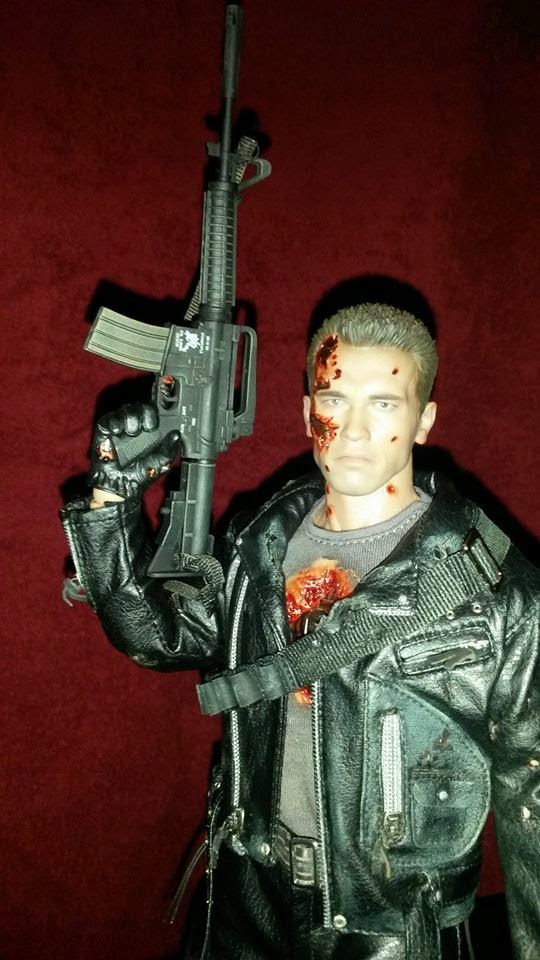 So, you basically get two figures in one. You can either make Arnold just a little dinged up, or full on destroyed like the end of the film. And with all the weapons and articulation, you're pretty much able to create your own pose or recreate one from the legendary film. I always wanted to pose mine from the end of the film with full on battle damage, but I'm a sucker for accuracy, and if I posed him like that it wouldn't be true to the scene where he fights the liquid T-1000. And there's no way that I'm not displaying the T-1000. But it steals your eye either way, and has left people speechless who have seen it in my mancave.

With amazing paint quality and sculpting, it not only looks like a clone of Schwarzenegger, but the metal endoskeleton that shows under his skin looks like real metal. I'm not exactly sure if it is, because it feels and looks like metal, but I've not heard rather or not it is. But either way, those parts are very shiny and metallic. And the fact that the metal is all stained up with blood just sets it over the top. I had this on order for over a year before it arrived, which tells me that due to it's quality that Hot Toys had trouble making their deadline. But, if in the end the product comes out looking this good, it's more then well worth the wait. 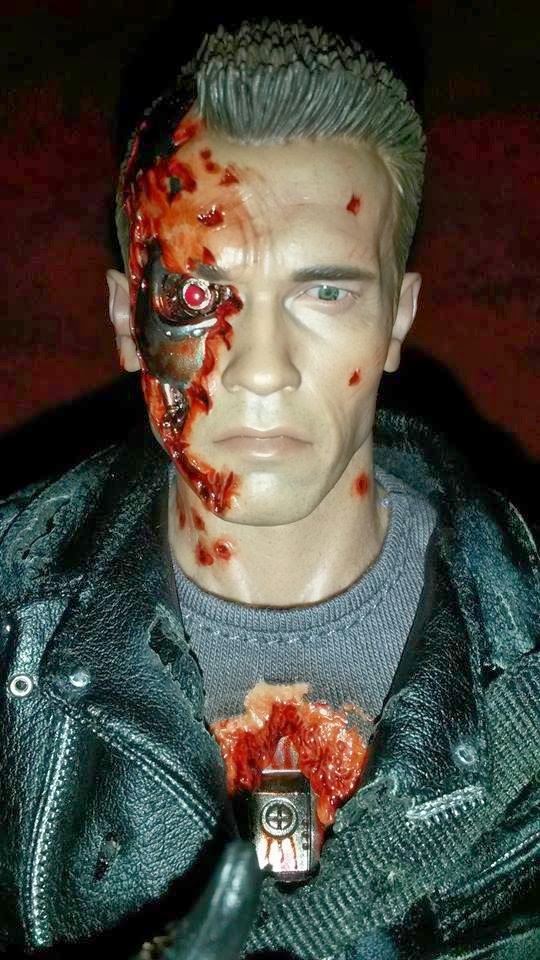 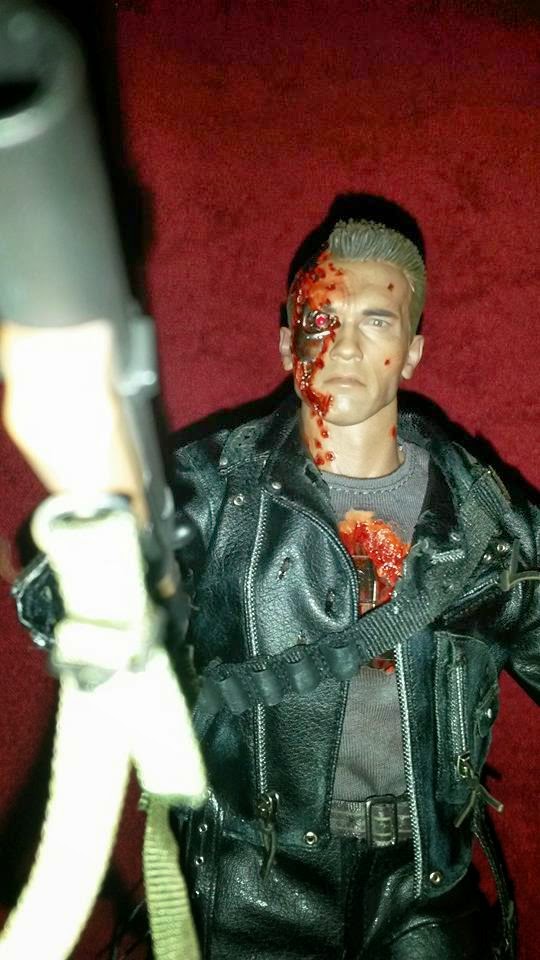 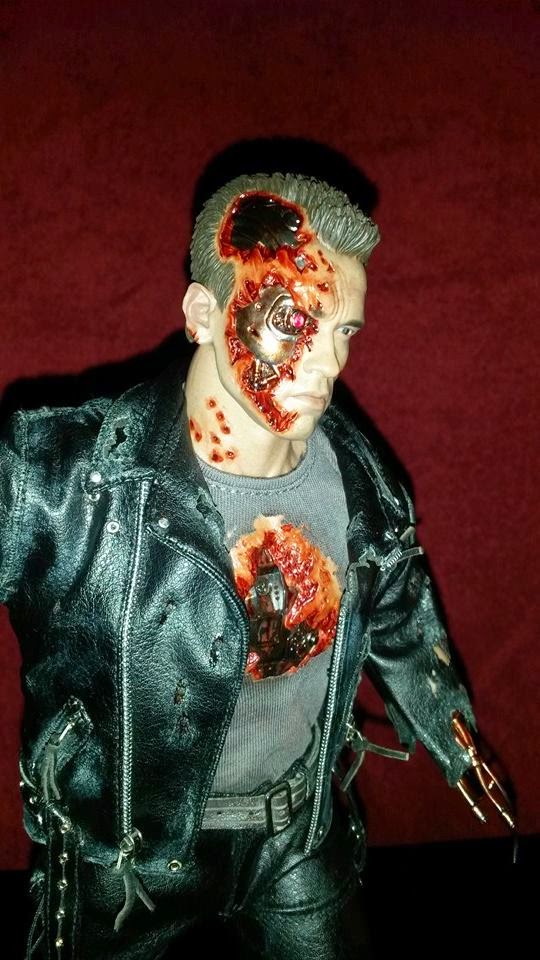 When I did took photos, I ended up taking over 250 pictures! With all the things this figure can do, I could have taken even more! Since I was using the liquid T-1000, I knew what my final shelf pose would be. But that didn't stop me from being completely entertained posing him in other ways for the photos.

I actually have not a single complaint about this product. This is what I'm talking about. People always wonder how or why collector's like myself pay the $300 price tag for things like this, and when you look at it in person, there's no explaination needed. This thing belongs in a museum! My only fault isn't with the product, but with myself for not buying two of them! But with other things on order at this price, one of each is usually my rule. As a matter of fact, I've yet to order more than one of any figure I own. 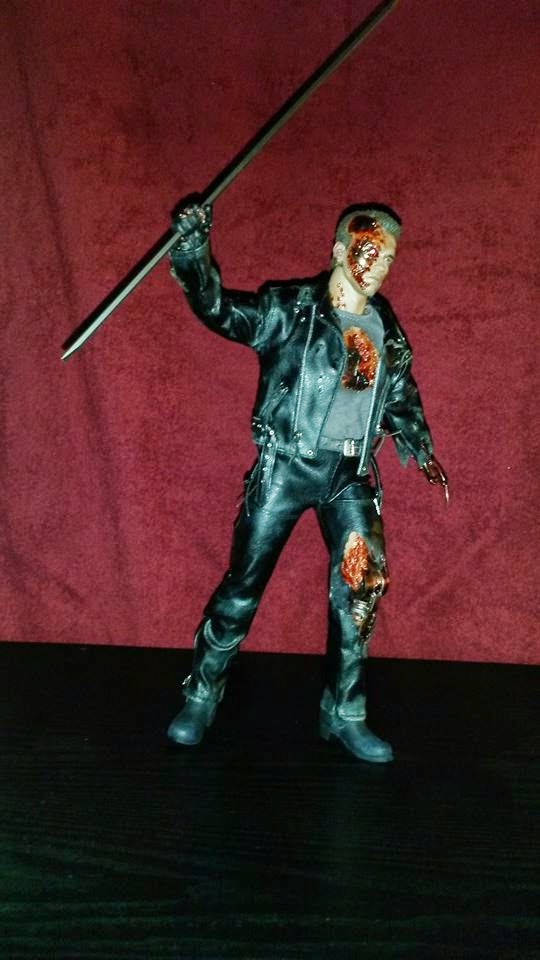 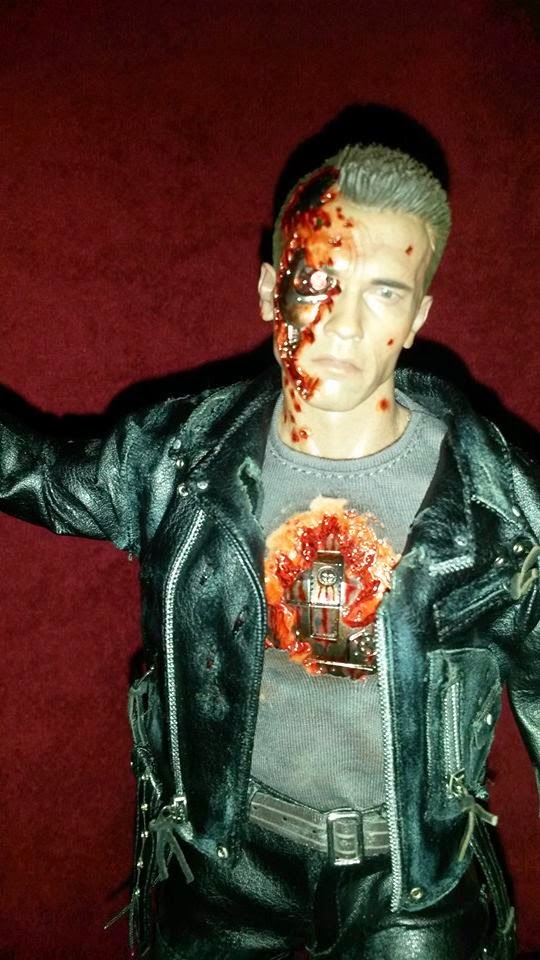 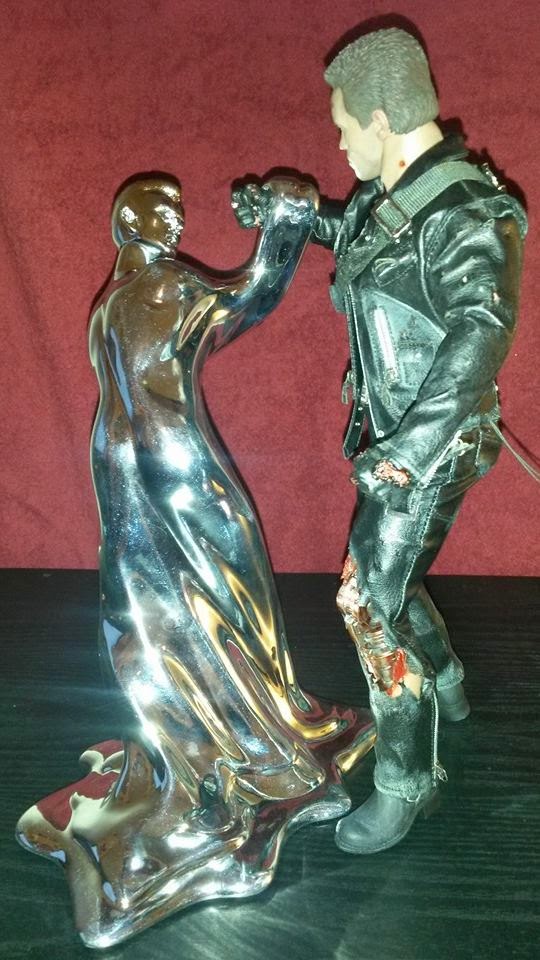 I recieved this piece towards the end of December of last year from Sideshow Collectibles and it still gets starred at every time I go into my mancave. Everytime I see it, it's like seeing it for the first time. For those of you out there looking for this piece, I wish you the best of luck, because I know what stuff like this goes for once it's sold out. I'm glad I got mine at retail price, which still made my ass hurt from the beating my wallet took (laugh). 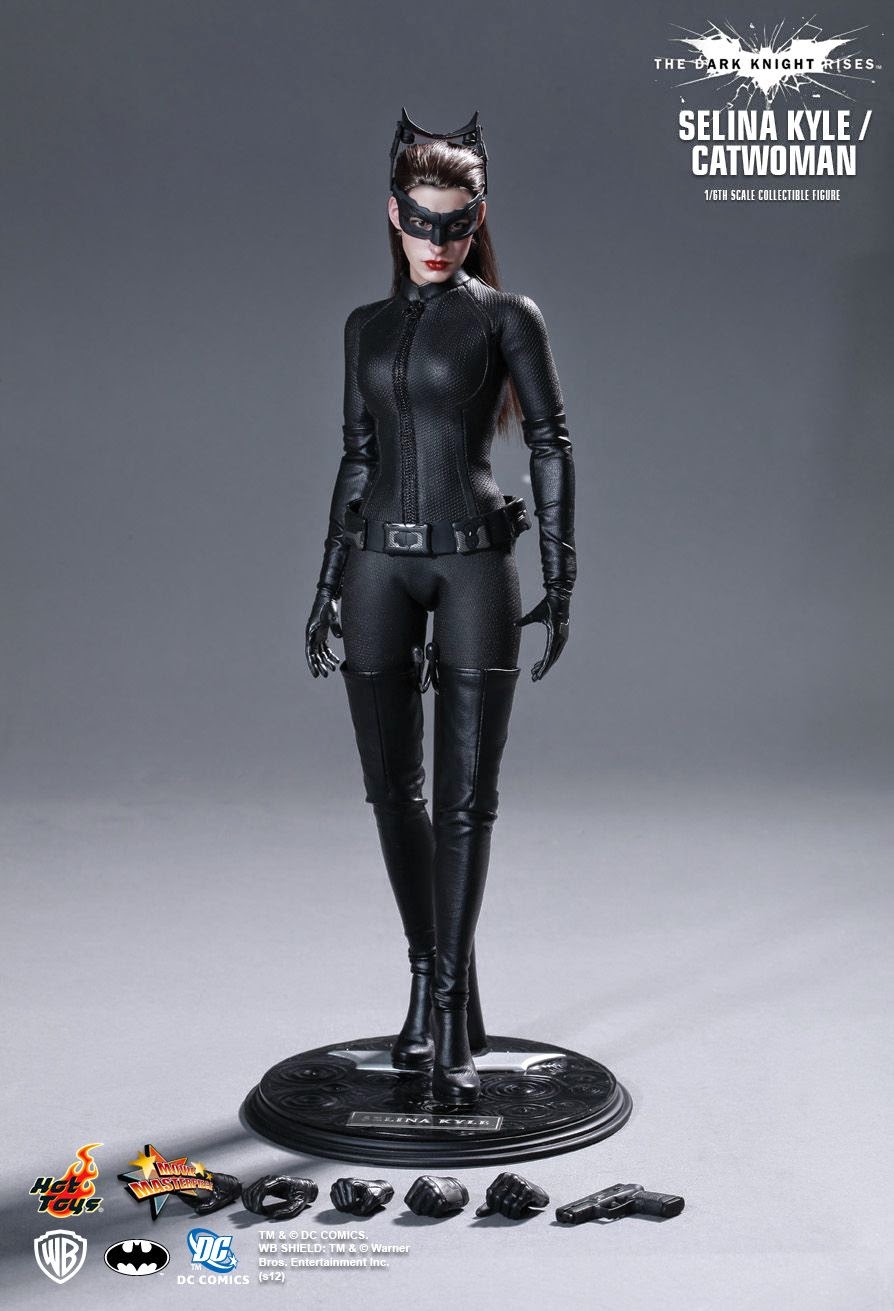