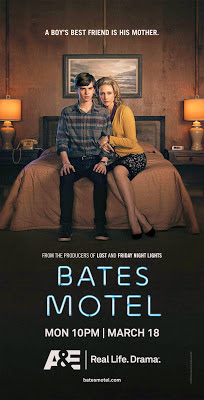 I know I'm late on this one, my apologies. I've been extremely busy lately with other film related things. I've also decided that I'm not going to review shows in the same manor as I have been. I'm not really enjoying telling the entire episode, I feel that it lacks my personality and if you want to read a full synopsis you could always go to Wikipedia. I'm going to be making my reviews shorter and sweeter, still giving away what happens, just not every second of the show. I'd like to be able to elaborate on certain things.

The finale on Monday was kind of a let down for me, I expected more to truthful. I had already predicted weeks ago that Norman was going to kill someone and I know that I wasn't the only one. It would have been nice if they hadn't made it so obvious and did something left field that we didn't see coming, like having Norma kill someone. I feel that right now this show is afraid of killing off a main character and that hurts it and lessens it to me. If you know that they're always going to get out of their situations than there's no suspense, everyone is safe. What this episode needed was to go out with a bang and it didn't.

Dylan buys Norma a gun and teaches her how to shoot it, so she can protect herself against Jake. There's some bonding between them that I enjoyed watching. He even calls Norma mom for the first time. I like this character development because I can relate to Dylan, how he always has a hard exterior because the past has dragged him around. And it's always good to see when those chains can be broken and happiness can be found.

After Norma informs Sheriff Romero about the threat bestowed upon her, he later finds the money and informs Norma that he'd take care of it. Later, instead of Norma meeting Jake, Romero does and kills him. This was extremely aggravating and I highly consider this a cop-out. All of this suspense built up with Jake and this fear we've all been driven to by him is all for nothing because in the end, Norma doesn't even have to fight her own battles. The whole Jake storyline wasn't concluded properly and it makes you realize how minimal the threat was to begin with. Lackluster to say the least.

Norman finally sees that Dylan and Bradley are bonding and although he puts on a cool facade, you see how enraged he is. He's destroyed emotionally and fueled with anger and despair. He takes Emma to the dance and she looks really beautiful, even if I say so myself. Emma leaves him with tears in her eyes when she notices all he's focusing on is Bradley, and he makes it obvious. At this point I'm really done with caring for Norman's feelings and he's a complete idiot for letting Emma go and for even looking at Bradley. He and she had one night together and he's become ridiculously obsessed.
He needs to get over it, it's becoming quite annoying. I can only image how Bradley feels.

After being punched in the face by Bradley's boyfriend, Norman walks home in the rain. He's soon intercepted by Ms. Watson, who takes him back to her house and tries to seduce him. He then has a psychotic break down and runs home where he and Norma are happy and all is well...NOT. The final shot of the episode shows Ms. Watson dead in her bedroom with her throat slashed.

All in all this wasn't a bad episode due to some character development that I liked. It was extremely uneventful though, and not the way a season should go out. I'll still be tuning in to the next season or course, but if it falls short like this I can't say I'll stick around any longer.


THIS EPISODE GETS 2 REAPER SKULLS OUT OF 5

THIS SEASON GETS 3 REAPER SKULLS OUT OF 5