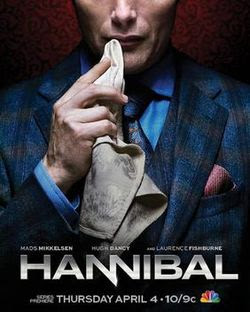 Last night's episode was  very, very good and one of the best yet. It was very dark and violent. They actually were able to re-create the feeling from "The Silence of the Lambs" very well last night.

The episode starts off at the Baltimore State Hospital for the Criminally Insane. Inside, we see some guards and armed officers looking into a cell that strongly resembles Hannibal's cell from the movies. That's a good thing because it adds to the authenticity of this show. Inside the cell lays a heavyset patient, laying on his stomach and bleeding out his mouth. After making sure that it's not a hoax, the guards open his cell and have him rushed to the emergency room. Once there, the nurse hooks him up to all the breathing machines and all that good stuff, only to find out he's fine and that it is in fact a hoax.

It had been over 2 years since the "Chesapeake Ripper" committed a murder and that is Chilton's argument. He patient Dr. Abel Gideon has been locked up for 2 years. This leaves Jack thinking that Dr. Abel Gideon is there man, while Will isn't so convinced. Something doesn't add up to him.

I thought that when Will investigated the nurse's murder was the best part of the show thus far. This time you really got to see how Will's mind works and it was directed perfectly. You saw Will act out the murder just like it was committed. What's cool is that earlier when the nurse got killed, you didn't see the murder. So later you see what exactly happened, only Will was acting it out.

Meanwhile, Jack receives a call late at night and it's the recording of an ex protege of his by the name of Miriam Lass. She says she was wrong and sounds in danger. Earlier in the episode, it shows a flashback of Jack and Miriam when he took her on to help him investigate the ripper case. He explains that one day she never came back from doing some investigating. Jack is insistent that Miriam is dead, even though some don't think she is. He won't listen to any other FBI agents, he even threatens to get violent.

After conducting an interview with Dr. Abel Gideon, Will still isn't sold that he's the ripper. The feel isn't the same, the motive isn't the same either. Now the show has made it obvious by the end of the episode, but those of you who read the books like me, we know Hannibal is the real ripper.

They make an agreement with Freddy Lounds, the reporter none of us can stand, to write a piece on how Dr. Abel Gideon is the real "Chesapeake Ripper" in hopes to provoke the real ripper into coming out. Hannibal sees the report online and as calm as he remains, you see the anger inside him. That was done by great acting. When you can pull off letting the viewer know exactly what you're thinking through just facial expressions you did you job well. And that is worth a pat on the back.

Jack gets several more calls throughout the episode that are Miriam. Jack's being taunted. Or is she really alive? In any case, none of the calls are traceable until the last one which actually leaves a phone number. After tracing the call to an old observatory, Jack calls the number back and hears it ringing from inside the observatory. Upon entering and searching for where the ringing is coming from, Jack and Will discover the phone...in a female's hand connected to a arm severed at the elbow.

There was also a lot of character development with Jack Crawford this episode. He makes a visit to Hannibal and talks about his wife and how he can't stop thinking about when she'll die. Hannibal comforts him and then brings up the Miriam situation and wants to know why Jack feels so responsible for her. It's because he's the reason she was investigating the case. Had it not been for him, she would be in class learning proper procedure with all the other future FBI agents.

We go to a flashback of how Miriam came to Hannibal's office to question him during her investigation. She has some solid proof that could land him in trouble, but he stays calm and offers only to help and she never suspects him. Until she see drawings in his office that are of the Rippers murders. Before she can act Hannibal grabs her and puts her to sleep by choking her. Now, I'm not sure if Hannibal did kill her or not, I'm thinking not. She didn't look dead, just passed out.

I believe she is alive and Hannibal is using her as psychological leverage over Jack. Although after getting under his skin with Freddy Lounds, it is possible she's dead now. And she could have even been the meal Hannibal and Dr. Chilton enjoyed earlier, which was tongue.

I really enjoyed the story in this episode and where it's taking all of the lead characters. I'm wondering how long it'll be before Hannibal gets caught? Maybe the finale? If he gets caught that early than I don't see a way around changing the original story from the books. As long as they do it justice I'll be fine. And for those of you who are not liking having to wait so long for Hannibal to be the main focus, don't worry it'll happen soon.

As I've said before, I don't mind Hannibal not being in the forefront of it all. I like his character but find him and his rich, fancy tastes to be boring. I'm glad they're keeping him at a distance like the films and movies did. Except for "Hannibal" and "Hannibal Rising", those books were bad and the movies were worse.