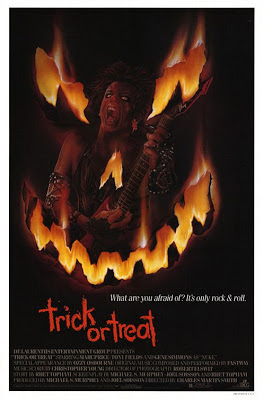 Synopsis taken from IMDb
Sammi Curr was a famous, devil-worshiping rock star who died under mysterious circumstances. Now he wants to come back to life. Doing so requires possessing radio wave and automobiles and making a few human sacrifices.

This is one of those films that I've been wanting to see for a long time. Regardless of how many movies I chip off of my "watch list", there's always some you forget. This is one of them. I know of it being a favorite amongst horror freaks, and considered a classic. So last week, I finally popped this film in and gave it a watch...

Back in 2006, Anchorbay was going to release this film on a special 20th Anniversary Edition DVD, but unfortunately encountered licensing issues with the films music. However, you can purchase the Platinum Disc Corporation's 2002 release on DVD, but it's almost impossible to find it for less than $35 due to it being out of print.

When the film opened it grossed $6, 797, 218 at the US box office and went over well mostly with fans of the genre. A year later it was released on VHS (how I watched it), the VHS is a lot cheaper and I find that watching VHS's to be somewhat charming on occasion due to the picture quality. 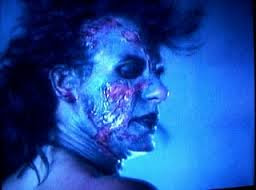 When 'Trick or Treat' started, I was getting that feeling of suspense and excitement. I knew this was going to be a movie that I liked. It instantly fell into the same category as 'Night of the Demons', only not as on point. Still, this film ended up being fun and very entertaining with a few scares. Mostly it was just an entertaining story. Like the aforementioned 'Night of the Demons', this film was the embodiment of what 80's horror is.
If you're as big of a fan of 80's horror as me, this is a film that'll hit home.

This film has a big flaw that I think is obvious. However, I feel as though they didn't know what to do with Sammy Curr's (Tony Fields) character after the Halloween dance. It's easy to see that they had the film in control up until that point, then lost it and didn't know how exactly to kill Sammy off. Nonetheless, the last few minutes of the movie aren't enough to ruin it for me. I instantly became a fan!

I really liked the main character, Eddie Weinbauer (Marc Price). He was sympathetic and easy to relate with. Marc Price is actually known from the 80's smash sitcom 'Family Ties' as geeky Erwin 'Skippy' Handleman.

I found this film to be very dark and gloomy, but with a lot of cheese and dark humor. In other words, it was a good combination of good things. It isn't overly slapstick, but like most 80's horror film, it's got it's fair share of humorous moments. 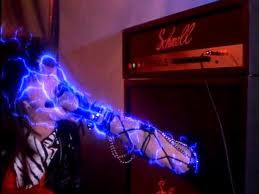 Tony Fields did a good job as Sammy Curr as well. I really liked his character, he's the rock star version of Mary Lou from the second 'Prom Night' film. He's very iconic and memorable, wardrobe and all. It's a shame that I've just gotten to see this film but, better late than never, right?

'Trick or Treat' is full of metal music and hair bands, and for its time, has some cool special effects. It's a very likable movie to any fan of the horror genre. And, of course it was awesome seeing Gene Simmons and Ozzy Osbourne! Every year on Halloween, I watch all horror movies that take place on the holiday, and this year I'll be adding this film to that list, alongside 'Halloween', 'Trick 'r Treat', 'Night of the Demons' and some other classics. This film is a winner!