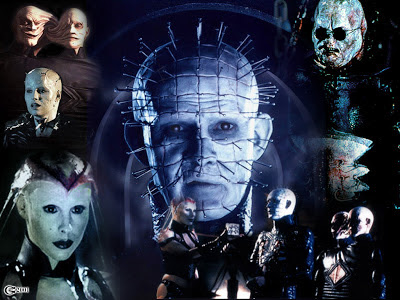 Since I'm a completest as much as I am a glutton for punishment, I thought it was time to finish the Hellraiser series. I've never seen any of the sequels past part 2. After 2 I was done with the franchise, but I've tiptoed around it long enough and I'm ready to waste approximately 12 hours of my life that I'll never get back.

I've always been a big fan of the original film, though I don't consider it to be amongst the ranks of "Halloween" or "A Nightmare on Elm Street". It's a concrete horror classic, there's no doubt about that. But of all the horror franchises (except for "Leprechaun") this series tends to be the dog, with repetitive awful sequels.

The OCD and completest in me won't rest until I finish this series and say I gave it a fair chance and learned all there is to know about Pinhead the the other Cenobites. I've already begun the first few of the sequels and I'll save what I think of them for later in the week.

Starting tomorrow I'll be reviewing 1 "Hellraiser" movie every day for the next 8 days in a row. Giving my full scope on the movies and my opinions on them. Wish me luck. If anyone has anything you'd like to contribute please feel free to comment. I'm interested in knowing how many people love or hate this series of sequels.

So I'll be back tomorrow with the first review for "Hellbound: Hellraiser 2", keep your eyes peeled.

So I'll end this with a tweet a fellow horror blogger sent me, "This isn't going to end well. Good luck!"
Posted by Drew Grimm Van Ess at 4:13 PM