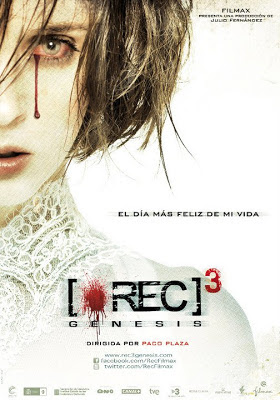 Synopsis taken from IMDb
A couple's wedding day turns into horrific events as some of the guests start showing signs of a strange illness.

This is the crossover review. I have no idea what Doctor Carnage's take on this film is, we just watched it and reviewed it. Now we'll find out how different or alike our opinions are on this. His review is posted below mine.

After not knowing what to expect from the second film, I decided I'd stay away from spoilers with this film as well. Sadly, this film strays far from what the first two films had created. They drop the POV angle for this film after a few minutes, and go live action style. I didn't like what they did with this installment. They tried way to hard to be a Resident Evil film, thus they lost that grip of reality the previous films had.

I liked that the film took place during a wedding and that it interlocks with the previous films. The concept of this virus of possession breaking out in the middle of a wedding ceremony is clever. However, once the action picks up, you're just hit with gore effects. I know the other films had gore, but this one showed it off, used the gore as a means to make the movie better. That's not the case. 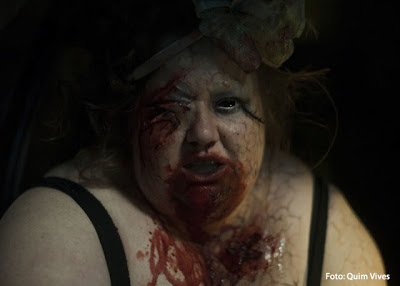 I like a lot about the film, it had good things to go off of. I feel as though they didn't know how far to take it and ended up losing the integrity the series had. The good angles they worked from weren't done in the idealistic way I wanted or expected.

I liked that this film is a love story, that's good, we can work with that. Then, it turns into too much of a love story! Every time the bride and grooms see one another, dramatic music plays, and it becomes over-the-top and just doesn't seem genuine or real at all.

The infected (yes, I said infected. They're not zombies), certainly look good in this film. There are some jump-out-of -your-seat moments, but they're just cheap jumps that have loud music accompany them in order to achieve the scare. The makeup and gore wasn't used as a means to tell the story any more. Instead, they use the gore and effects to make the story good, and that's not how it works. Great story is everything in a horror film, it's the foundation. I think they focused too hard on the wrong material to make this movie a success. 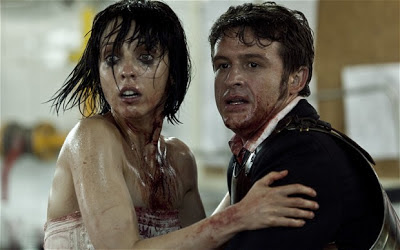 Overall, this film is entertaining and a fun, gory mess. It's far from great though and by far the weakest in the series. There are some twists and turns that keep you invested in watching, but there isn't any good payoffs. The ending is twisted and tragic, though I feel if this film were meant to feel more realistic, it would have gone over better.

You can also view this review HERE 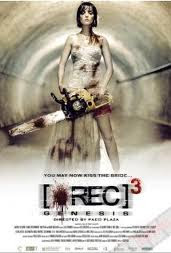 This is my crossover review for [REC]3 Genesis (2012). I hope you all enjoy both of our views and opinions on what I found to be a very entertaining movie.

The third movie in the [REC] franchise was surprising in many ways. The story follows two characters, Koldo and Clara, on their wedding day, which is rudely interrupted by people infected with Madeiros girl virus. The film follows the characters through all kinds of gory and chaotic situations, and always manages to keep it's tongue planted firmly in it's cheek.

[REC]3 Genesis takes things in a totally different direction than the previous [REC] movies, replacing the fear and tension generated by the first two movies with splatter and comedy. It also ditches the found footage style after around twenty minutes, with the guy documenting the wedding saying "people have the right to see this" only for one of the main characters to smash the video camera, and the film then goes for a more traditional camera format.

This is an incredibly clever way of freeing the franchise from the found footage drama, whilst also allowing the director to have fun with the movie, whilst also building to the fourth and final movie in the franchise, [REC] Apocalypse. It bugs me that a lot of people tend to put [REC]3 Genesis down because it's fun. Fun is what sets it apart from it's predecessors, and anyone who even hints at it not belonging in the franchise, are taking things way to seriously themselves.

This movie is similar in tone to the awesome Evil Dead 2. There are some amazing moments of comedy, some incredible gore scenes, and some beautiful and touching moments between Koldo and Clara. Paco Plaza (one half of the twosome that directed the previous [REC] movies) has made an old school infection movie that harkens back to the days of splatstick (a phrase coined in the 80's for splatter comedy movies) movies like the aforementioned Evil Dead 2 and Peter Jackson's Braindead (Dead Alive).

[REC] Genesis is certainly worth a look. Just don't go in expecting the same old thing as the first two movies, and don't go in looking for something serious, and I'm sure you will have a riot.