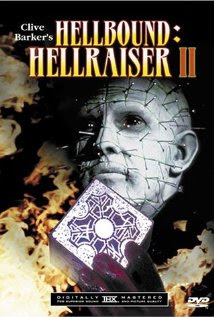 It will tear your soul apart...again.

Synopsis taken from IMDb
Kirsty is brought to an institution after the death of her family, where the occult-obsessive head resurrects Julia and unleashes the Cenobites once again.


After watching this film for the second time I found a new appreciation for it. It's actually not as bad as I remembered it being, which is refreshing. It's actually a very good follow up to the original. Still not on par with the first film, but not a bad film or sequel at all. Hell, if they'd stayed this good we'd all be fans of the series!

What I like about "Hellbound" is that you get to go back and explore the origins of Pinhead. I'm a sucker for origins stories. While Pinhead's past isn't extraordinary, it helps the movie flow and gets you some character development. One thing that I didn't like was the fact that Julia is back. Not that it's a reason to not like the movie or anything, I just don't like her character. She's one of those villains who's such a snake that you just wish them an awful death. 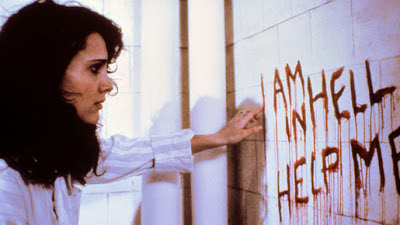 The way Julia comes back is through the mattress she died on. Before Dr. Philip Channard becomes the main villain and Cenobite in this film, he brings one of his sick mental patients to the mattress and essentially feeds him to Julia. This series is more known for it's gore and torture more than anything else, but the effect of Julia resurrecting from the bed was a good scene and her makeup was done with old school class.

Kirsty's character in this film didn't really do much for me though. I feel like she was just there to be there. There wasn't really any character plot or development with her in this film. She just runs around screaming, trying to not get caught by the Cenobites. I like that she's in an institution and considered crazy for her stories that recap the first film. I just felt like there should have been something more to her, or maybe even introduce a new heroine that Kirsty has to help out with her knowledge.
Kirsty does play an important part in the end though.

Of course Julia backstabs the doctor who brought her back, even though he thought to have her loyalty. Anyone who seen the first film knows that Julia is conniving and manipulative and knows not to trust her. It ends up working out in the end though because the Channard Cenobite is a bad mother. The special effects suffer but that's fine, the first film isn't known for it's outstanding special effects. It's the makeup we care about and that delivers grotesquely. Channard Cenobite is absolutely one of the most memorable characters in this series. 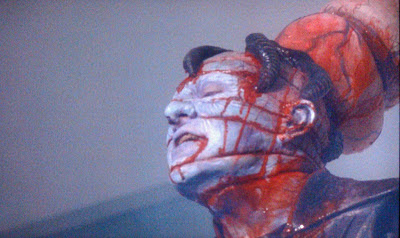 In the end, I like this film a whole hell of a lot more this time around. It's not a perfect film, but it's a solid 80's horror flick. One of the things that I liked most about this film was that Frank returns once they're all in hell, or the 4th dimension, whatever you want to call it. Aside from Kirsty's dad, just about the whole crew from the original is back in this film. Although we do see Kirsty's dad, only he's skinned and suffering in hell. Part 2 of this series showed us there was still some wind in the sails of the inevitably sinking ship known as the Hellraiser franchise.