Behind the Cross (short film) 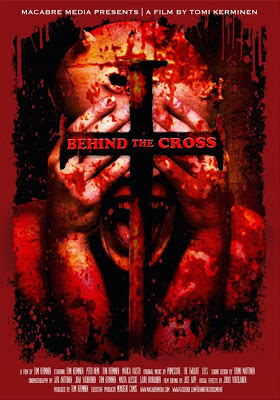 This is another short film I've been asked to view and review, so I'm always happy to oblige. This little devil comes from Macabre Media and is an artistic horror film from Finland.

I've never personally been one for art films. I wanted to try this film though because the trailer caught my eye and so I gave it a watch. Like most art films, this film has a barrage of crazy, twisted images that flicker here and there. Some happen so quick that your eye catches it, but your mind catches up after you've thought it over. It reminds me of the Nine Inch Nails music video for "Closer". If you've ever seen that you'll get what I mean.

Even though I'm not keen on artsy films, I could read the lines on this one. It's a sadistic vision but has underlying sarcasm. It's all about how you can't run from who you are or what you've done. No matter how far you travel or how you change your identity, inside we are all the same and we are all flawed at our center core.

What I got out of this film was that no matter how much you'd like to run from your problems you'll end up back in the same situation in the end because you are who you are.

It calls out out the hypocrisy that we all have and our primal need to do bad things.

There's a few quick shots that stand out to me, one of them being the clip with the broom. Wait 'til you see it and you'll understand. It's full of creepy shots and noises including the priest's laugh...

While I didn't find anything great in this short film, I appreciate it's purpose. If you like artistic horror films, this may just be a film for you.

The acting and camera work doesn't stand out, but it's exactly what you'd expect from a short film that's built around dark humor and sarcasm. I feel that if I were into artsy horror films that'd I'd probably like this one.