Iron Man 3 doesn't live up to its potential 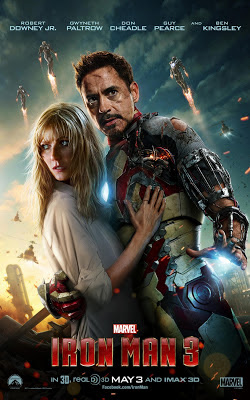 Synopsis taken from IMDb
When Tony Stark's world is torn apart by a formidable terrorist called the Mandarin, he starts an odyssey of rebuilding and retribution.


First off, I'd like to mention that this movie actually has a lot of surprising elements. They advertising campaign did a great job with not letting a lot out to the public through the trailers. After seeing the movie I realized how much happened that wasn't even brought up in the trailer. However, the childish aspect of Marvel's movies really shows through in this film, bringing it down a peg.

The first Iron Man film was a damn near great film and the sequel was a bit lesser than what we expected. This film lets the ball slip a little more. Luckily this is the last Iron Man portrayal by Robert Downey Jr aside from Avengers 2. After that Downey is handing off the role to someone else who's younger. Last I heard, Disney and Marvel have an idea of who will be playing Iron Man, but their lips are sealed. The Iron Man series won't be rebooted, just a new actor like in the James Bond pictures. 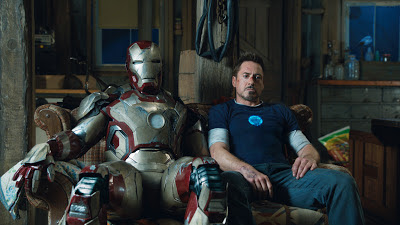 I fell like this movie wasn't taken seriously at all and that hurts the series. It's as if they wanted to celebrate Iron Man's exit with a laid back and fun approach as appose to a epic finale like "The Dark Knight Rises". What once had a serious tone and vibe now is reduced to a lot of unnecessary humor and a bunch of new ways to put his suit on. I felt this movie has more of a childish tone to it than any of the other Marvel films as of late. Is this to do with Disney dipping their hands into the cash cow? One can only speculate.

I think they lost focus of what Iron Man originally was and chose to do over-the-top special effects and a lot of cheap jokes instead of good writing and a decent plot. I must admit that this film has a ton of cheese in it. Some of the stuff I laughed at wasn't meant to even be funny. I didn't find there to be any real threat in this movie, it wasn't very thrilling for me. The acting wasn't anything special and that includes Downey, his Tony Stark portrayal was lazy in this film.

I'm not trying to completely bash this movie, but there are quite a few things that I didn't like about it. Including the twist. They made everything one big sarcastic joke and that aggravates the hell out of me, but it's still a solid action movie and fun to watch. It's just pure entertainment. I felt Iron Man deserved a better exit than this. Not a terrible movie overall, but not even close to what it should have been.