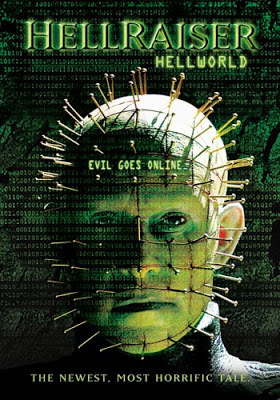 "The Newest. Most Horrific Tale."

Synopsis taken from IMDb
Gamers playing a MMORPG based on the "Hellraiser" franchise find their lives endangered after being invited to a rave whose host intends to show them the truth behind the Cenobite mythos.

Be forewarned that if you don't want to read another rant about an awful Hellraiser sequel, don't bother reading this. Right when I thought the series might have gotten back on track with Deader, they come back with this piece of garbage. This was the most disappointing one yet because not only was it lame, it tried to change key things about the legacy. Yeah, it's all explained away in the end, but it's still ridiculous. This is yet again, another one that doesn't feel like a Hellraiser sequel.

I actually really like Lance Henriksen even though he's been in some bad movies. This though, is a low point and I'm sure he tries not to remember this one. The acting is awful right from the go (except Henriksen) and the story already seemed to be dull. It was one of those films where you know going in that most of the characters are douche bags and you hope they die painfully at the likes of Pinhead. You're not supposed to root for Pinhead! He's supposed to be a force, an imposing entity and instead they dull it down with no likeable characters and no character development. 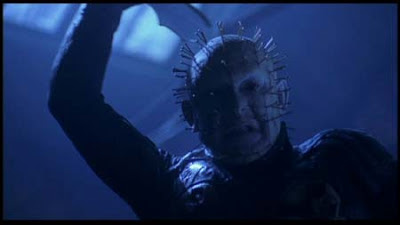 The funniest thing to me is how all of the characters refer to the original "Hellraiser" as old and outdated. There's several things said about this, trying to imply that this is a much better and scarier movie than the original. Making you think that they beefed things up a bit, but they don't. The fact that they tried to outdo the original is a joke and this film fails miserably in almost all aspects. Some cocky film makers and writers trying to rewrite the past with a straight to video sequel. Yeah, they're weren't delusional with that were they?

The worst thing about this film is that they make Pinhead a damn slasher! Rather than other forces and chains ripping these half wits to shreds, he actually hacks them up himself. He cuts Derrick's head off with a meat cleaver. This shot really turned me off of this movie. Now they truly have lost vision of what Hellraiser is and was. Trying to humanize Pinhead doesn't work, let him be a demon and a supernatural force.
But this is a far superior portrayal of Pinhead compared to the original film, don't ya know?

Yeah, it gets dismissed at the end as being hallucinations from a psychedelic drug they were given in a revenge scheme. Poor cop-out for a poor movie. If this were a movie on it's own and not a Hellraiser film I may have liked it. But this IS Hellraiser, and they told a really bad and uninventive story with this one. Sometimes trying new things strays way to far from the original ideal and this film suffers horribly. I don't consider this a Hellraiser film. 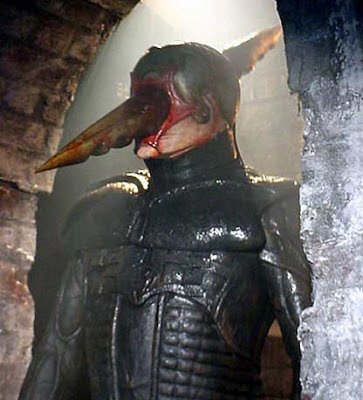 Overall, it's a cheap, lousy, half-assed attempt at being even close to a good imitation of a Hellraiser entry. I couldn't be more happy that I'm done with all of this after tomorrow's review. Which won't be pretty either, I promise.