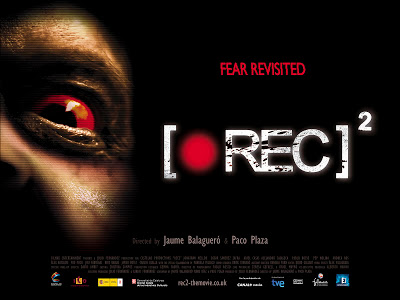 Synopsis taken from IMDb
The action continues from [REC], with the medical officer and a SWAT team outfitted with video cameras are sent into the sealed off apartment to control the situation.


This is the beginning of a crossover with another blogger. We discussed a theme for a crossover and since I haven't seen the second or third installment in this series yet, we decided that this would be a great topic. He reviewed the first film earlier today, you can read it HERE. I finally watched [REC] 2 and tomorrow we'll be co-writing the third film review together.

I saw the US remake of [REC], "Quarantine", before I saw any of the [REC] films. I was very fond of the US version and still am. However, once I finally saw [REC] I knew what all the hype was about. And I was definitely a big enough fan to want to see the sequel.

I didn't read any spoilers, I had no idea what part 2 was going to be like, or about. To my surprise, it takes place right after the first film, on the same night. I always like when films do that. It makes watching them back to back come off as one big movie. I've recently done this with "The Collector" and "The Collection". Both of which I've seen before, just never back to back. 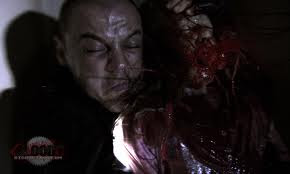 This film doesn't take any time to pick up like the first film did, it's intense and nail biting 10 minutes in! Yet again, the viewer is thrown into the chaos. There's so much going on, that it's hard to keep track among all of the havoc.

This film delves deeper into possession, allowing us to understand more than we could in the original film. The idea of possession going around as a virus isn't exactly original (they did it on the hit CW series "Supernatural") but, it's never been done this well before. As most of you know, possessions are the type of movies that scare me the most. I don't play when it comes to that stuff. So this one had me more scared than I was in the original, just because you know now that they aren't just rabid people. They're evil and that's why they're attacking everyone.

I thought it was cool that some of the characters from the original film were in this as well. A lot of people would have just moved on and picked up with a new film, but that's not the case with this one. It adds to the authenticity of it being a continuation, to see the little girl and the lead, Angela Vidal,  from the first film in this one. When Angela shows up, questions immediately arise.

The aren't allowed to leave unless the doctor gives the orders for the doors to be opened. He'll only do that when they get the blood from a possessed human, so he can come up with a cure. As if that isn't hard enough to accomplish, the situations never go as planned and they always end up worse. They're on the run for their lives inside the apartment building but can't leave. 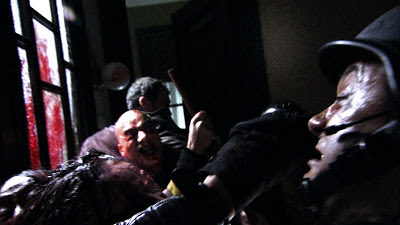 I liked that we get introduced to new people, who are residing on the roof with their camera. Once they're involved, we watch things through their camera too. The film makers did a good job of making these teens or young adults come off as real people and not actors.

As the film reaches its climax, a lot of death and twists are bestowed. Including one that I didn't expect, but had a slight suspicion about. This film is non-stop scary, it's the scariest parts of the first film and then some.

It's a really tough call to make on if I like this film, or the first more. It's one of those ones I'll have to let sit with me for a while and give it time to sink in. Solid horror film though, no doubt. And a damn good sequel.