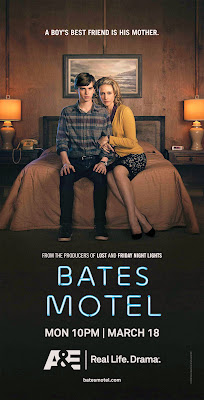 Now that Fox's "The Following" has ended my Monday night lineup is pretty weak now. But at least I still have Bates Motel, but nothing beats the lineup of the that was. I'll be anxiously awaiting next year when they're both on and my Monday tradition continues.

This episode of Bates was pretty crazy. Not as good as last weeks, but still good nonetheless. If anything this was a filler episode, because they open a lot of new doors in this episode that we know are coming into play later.

Dylan comes downstairs to be greeted by Norma who's making breakfast and in an extra chipper mood. Dylan accepts breakfast and is actually happy around Norma for all of a minute. Once he tells Norma he's still moving out she storms off in a hissy fit.

Norman is visited by Emma but refuses to see her. He has his mom tell her that he's under the weather. Norma sees the hurt in Emma's eyes and sympathizes with her. Norma has Emma take her out to run some errands and offers to buy Emma lunch.

Meanwhile, Dylan sees an unknown car parked and staring at the motel. Dylan gets smug and let's the strange man know not to invade on them. The man asks where Keith Summers is, and when he's told Keith passed away he suddenly leaves.

Out on the town, Emma tells Norma about Norman's relationship with Bradley and Norma's interest is piqued. Emma takes Ms. Bates to Bradley's yoga class where Norma scopes her out with envy. I really like how Norma is looking out for Emma and likes her, I like Emma too. The character development is going to go well, I can see it.

Later, Norman and Dylan see Bradley while leaving the store and she and Dylan instantly give each other "the look". I can see this turning into something  and that's not good for Norman nor his blackouts. We all know what Norman is capable of.

During this episode Norman also finds a dog and somewhat adopts it, even against Norma's wishes. I was nervous when Norman first found the dog because he had a hammer in his hand. As you all know, killers often start off with killing animals before progressing to humans. I thought the dog was a goner. Good to see I was surprisingly wrong.

While Norma is tidying up, she sees the same man Dylan dealt with earlier and he's fishy, not to be trusted. You know something's off with him from the start. He asks if he can have the same arrangement he had with Keith Summers: where he rents room 9 and all other doors in that block every couple of weeks. Norma agrees pleasantly but she knows something is off with him. When she asks him what he does for a living he simply says "sales". Why Norma didn't kick him off the property I'll never know...I guess she wanted the business.

Norma has it out with Norman about his liking Bradley and Norman explains that he really likes her. Against his wishes Norma presses him on the issue and he storms out of the house, desperate for his individuality and freedom.

Later, Dylan explains that the guy in room 9 isn't normal and demands that he go to his room so the man can fill out his information and give his payment. Yet again, Dylan feels him out. Letting the man know he's not playing games.

Norman goes to Bradley's house and spills his feelings only to be turned down and told pretty much that it was a "fling" and nothing more. Norman wasn't wanting to hear he got a booty call, he wanted a relationship. After utterly crushing him, Norman walks home crying.

When he arrives back at the hotel he sees the dog he's adopted and calls it to him. As it's on it's way it is suddenly run down by a car. Norman runs to the little dogs aid and Norma helps him get the dog inside. He then tells his mother that she was right in her assumption of he and Bradley's relationship and that Bradley isn't right for him.

As I said earlier, not the best episode but a still solid. I think Dylan and Bradley are going to hook up and I think that is so wrong. Not only is it breaking bro code, but Dylan's pushing Norman to have a normal life so for him to stab Norman in the back like that is only starting a fire. I hope Dylan gets burned too. Up until this point I've really liked Dylan, but if it goes the way I'm predicting I won't like him much longer.

I'm most interested in the man in number 9 and what his tie is to Keith Summers. I'm guessing he is the big boss guy that Keith and Shelby answered to. The Bate's think they're safe now but I think it's only going to get worse from here on out. And that includes their personal lives with each other.