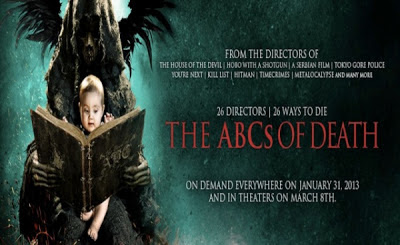 I've always been a fan of horror anthology films so it'd be fair to say, I had a lot of excitement going into this. Anthology films are great because they're so much fun packed into one movie. I remember growing up watching 'Tales from the Darkside' and 'Creepshow'  and, they still remain favorites to this day. The idea of anthology films didn't surface until early 1930's with two of it's earliest films being Edmund Goulding's 'Grand Hotel' and Paramount's 'If I Had a Million', both released in 1932. The anthology method wasn't used in horror until the 1940's. And in 1945, it's biggest one to date, was released titled 'Dead of Night' which was followed by a swarm of British horror anthologies in the 60's and early 70's.

'The ABCs of Death' offers a fresh take on the anthology spectrum and takes it to bold levels. I'm not a hundred percent sure on the matter, but this is probably the most stories ever put into one anthology movie. 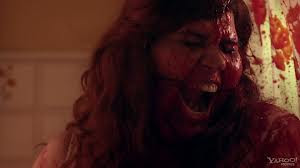 The UK's very own Lee Hardcastle won his spot as director for T with his claymation short after entering a contest for the 26th director. His story in the film is one of the most enjoyable ones and is full of dark humor.

I ended up not liking the film as much as I wanted. It didn't meet the high hopes I had for it. I found there to be too many stories full of humor and that made it less enjoyable for me. The serious stories ended up being the best ones and, it isn't because I don't like horror comedy; I like all types of horror. The humor in this film was too much for me to take it seriously though. To give you an example, Noboru Iguchi's "F is for Fart" wasn't enjoyable to me. I slightly smiled but I never laughed, and I was eagerly awaiting the next story to come on.

I'd have to say that my favorites of the lot were Xavier Gens' 'X is for XXL', which is a gory and witty short, only to be surpassed by Ti West's 'M is for Miscarriage'. They are the only ones that I genuinely like. Other than those, some of the concepts were just so ridiculous,  I couldn't find myself being entertained. And, I found myself checking the clock on the DVD player to see how much longer of the movie was left. I did enjoy Macel Sarmiento's 'D is for Dogfight'. That was a good one! 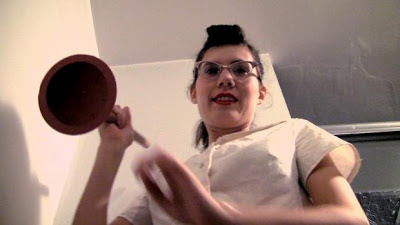 One thing that I do need to give credit to this film for is how wide it's scope is. Even though I didn't like all of the stories I still have to admit that this movie went everywhere. Then again, it did have 26 stories, so you'd have to expect nothing less.

If anything else, we got to see some of horrors up-and-comers shine and, leave us in hope for what the future of horror holds and will bestow on us. Other directors showed that either we're in for some bad films in the future, or that they just didn't properly use their skill for their short in this film. We can hope it's the latter.