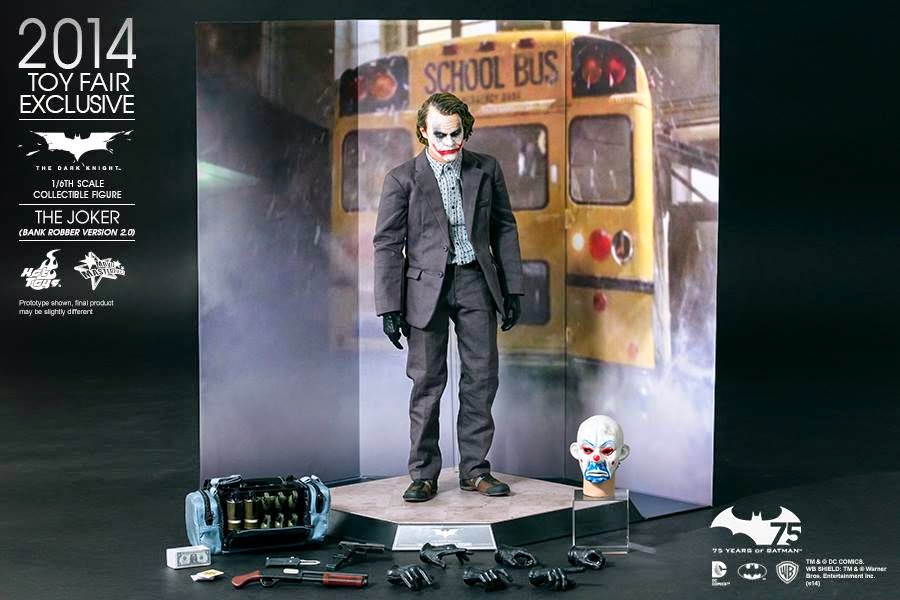 That's right, this week for Horror Toy Tuesday, it's not an actual horror product I'm talking about. Although some say that the Joker performed to perfection by the late Heath Ledger is in fact a horror character. Premium action figure company Hot Toys is at it again with yet another Joker! If you ask me, it's a bit ridiculous that another figure of The Joker is being made, especially since it's just a revamp of a previously released figure, same as the very last Joker they did. Fans who collect their line of action figures such as myself, have waited throughout the years for a Ra's Al Ghul from Batman Begins, and a Lucius Fox from any of the three films in the trilogy. I wouldn't mind a John Blake (Robin) action figure either, to be frank.

It seems like for every 25 Iron Man figures Hot Toys makes, they make four Predators and a version 2.0 Joker. It's a vicious cycle that never ends!

Hot Toys has done a great job at bringing Christopher Nolan's The Dark Knight trilogy to life in almost creepy lifelike fashion in their line of 1/6 scale (12 inch) action figures. They've done so by giving us almost all of the major characters, hell, they even did an Alfred! And yet, rather than finish up with the remaining cast who deserve the toy treatment, they give us another Joker. I'm one of the biggest fans of that trilogy that you'll find out there, and I'm not exaggerating, but even I have to say that the whole Joker thing is ridiculous. I understand that he's a marketable character, so he brings in the cash, but there's no reason why we need a rehashing of an already existing (and amazing) figure. Supposedly the reason this is being made is because collector's across the world have sought out the original figure in hopes of obtaining it.

Well, I could be wrong about this, but what the hell is the point in bragging about how rare and limited your products are if every time they sell out you just make another version? Selling out products is the name of the game, and that's how collections go for a lot of money, because they're full of no longer obtainable figures that are nothing less than masterpieces. That being said, I'm still buying this one (laugh) even though I do in fact own the first version. This new one comes with a pretty sweet base and updated and improved headsculpt. 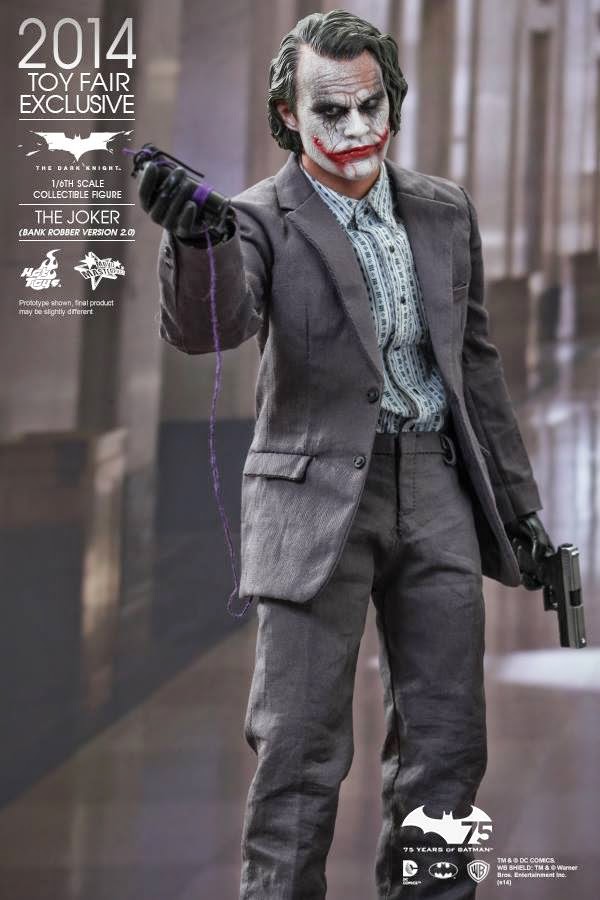 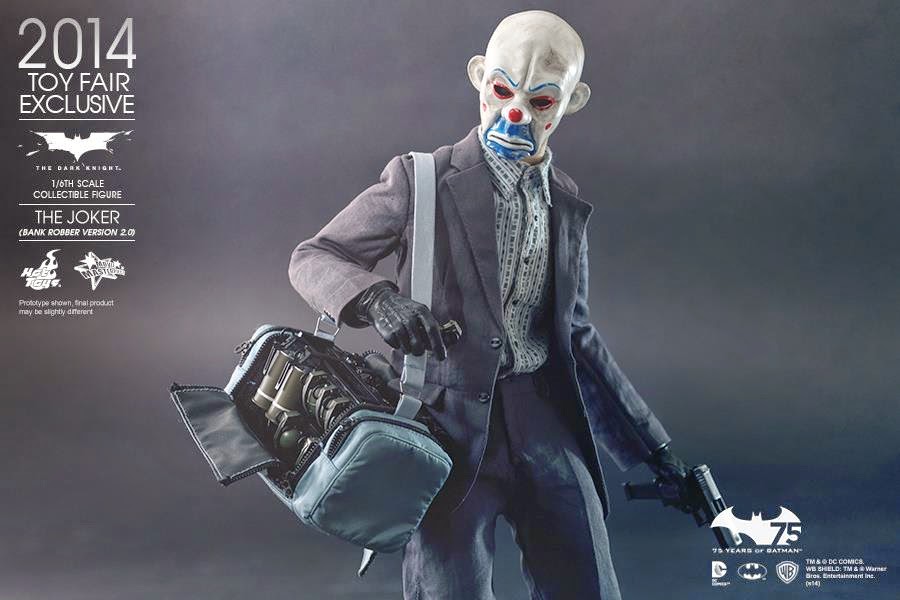 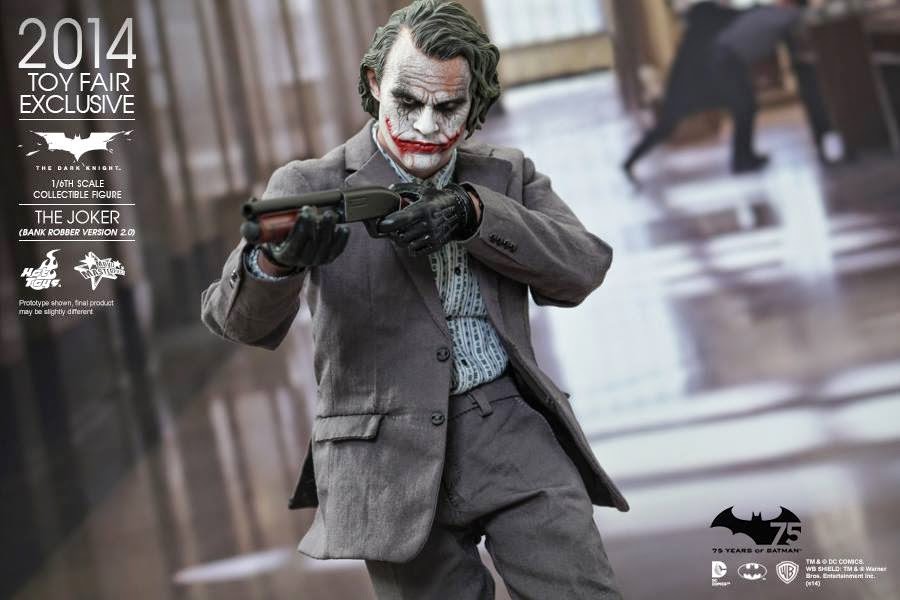 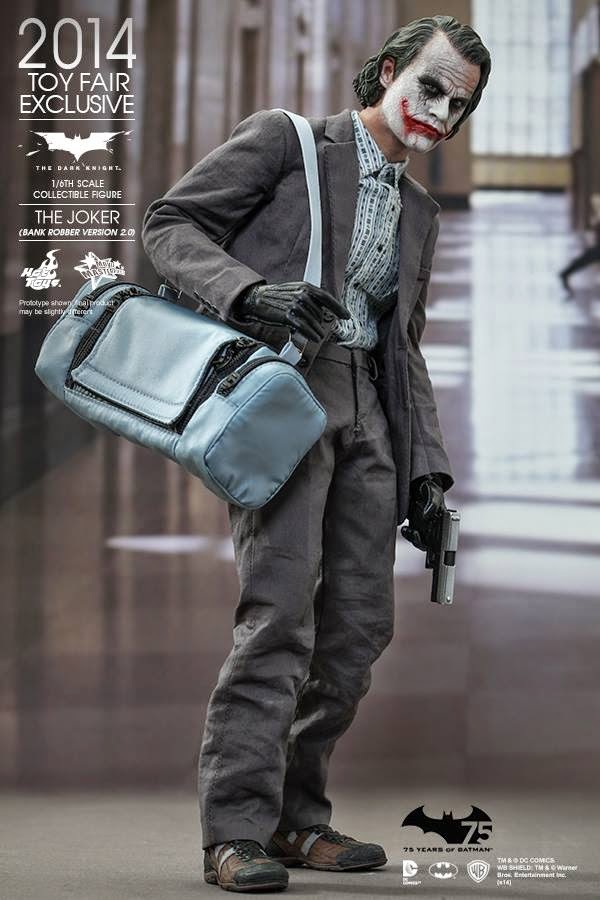 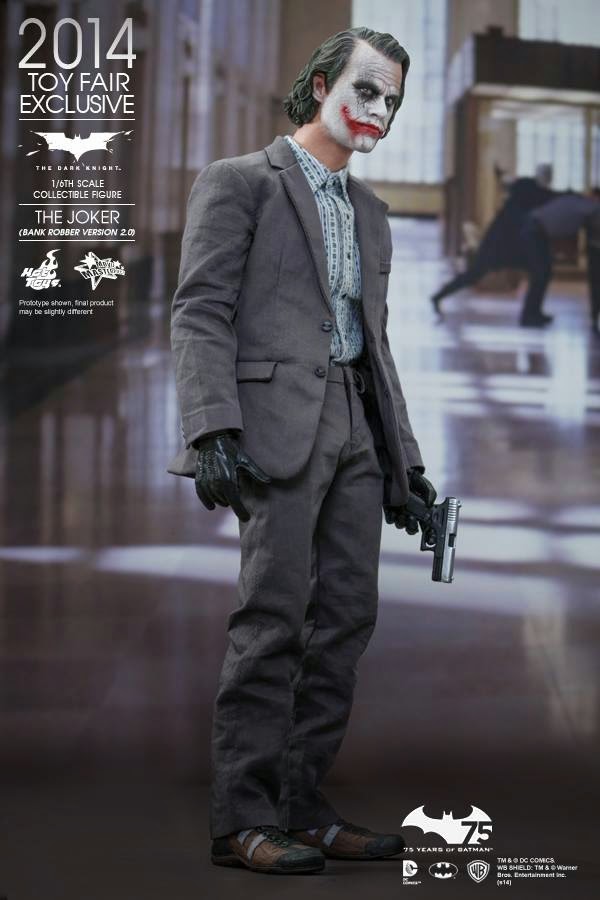 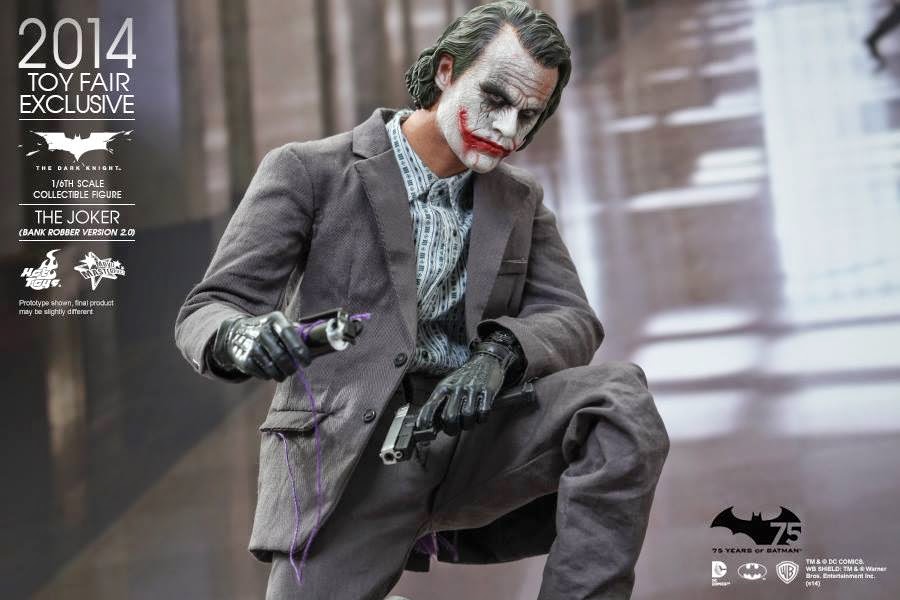 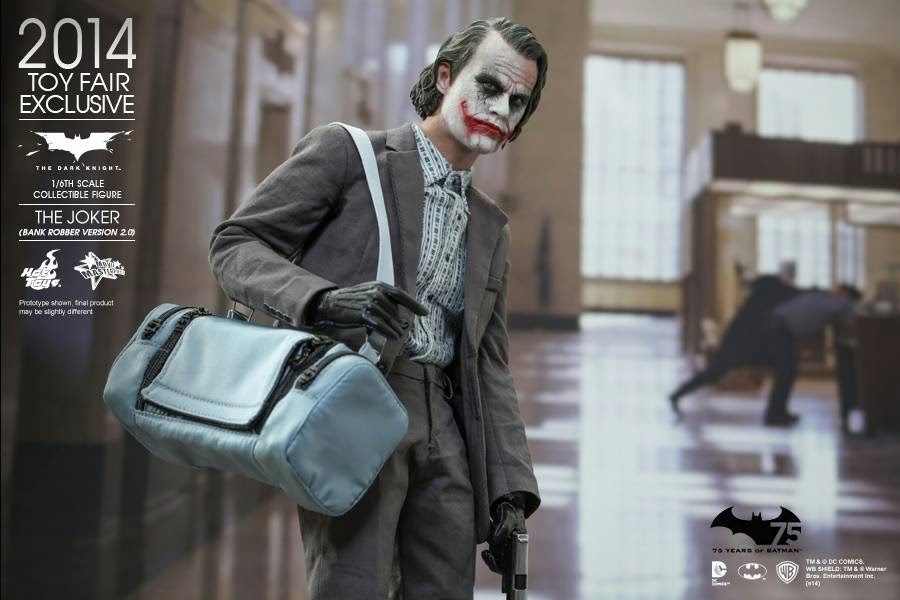 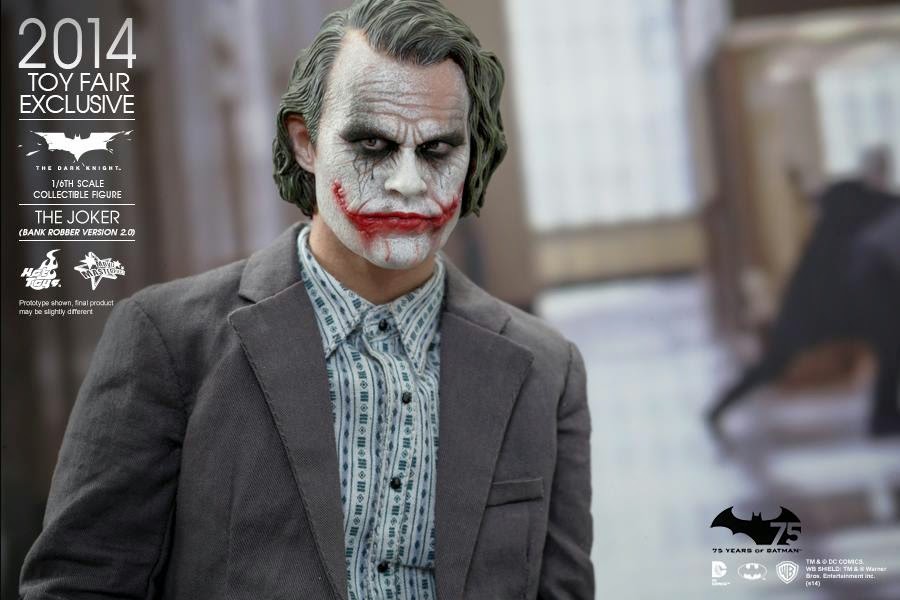 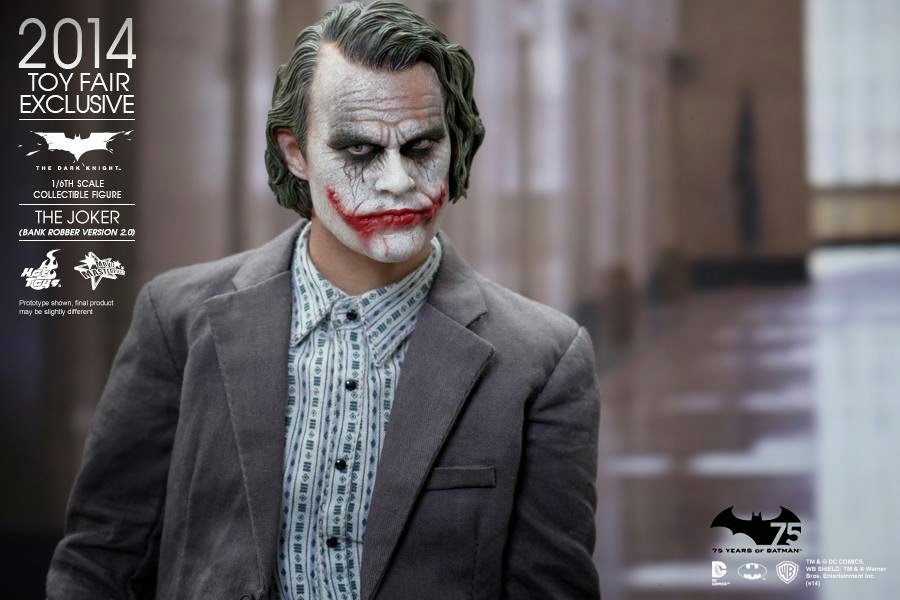 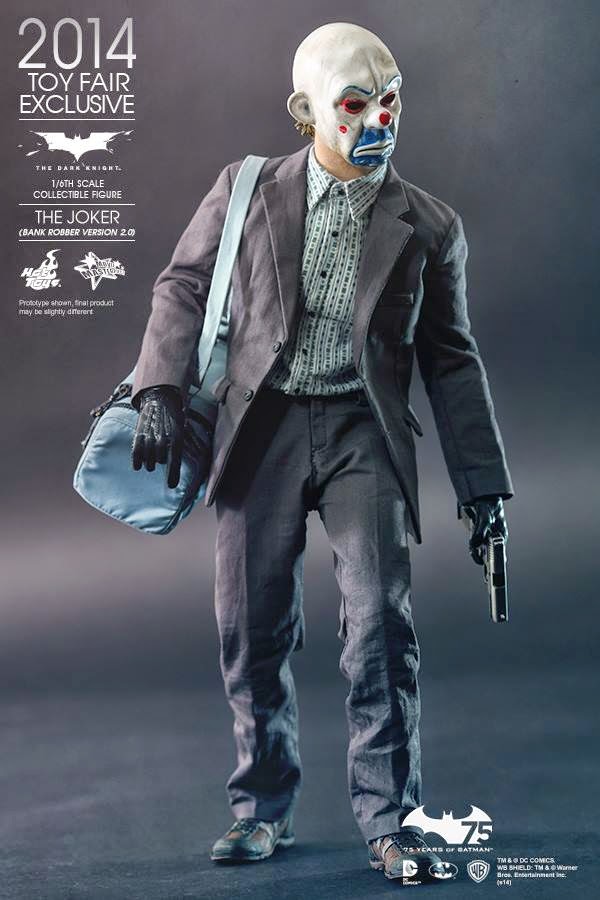 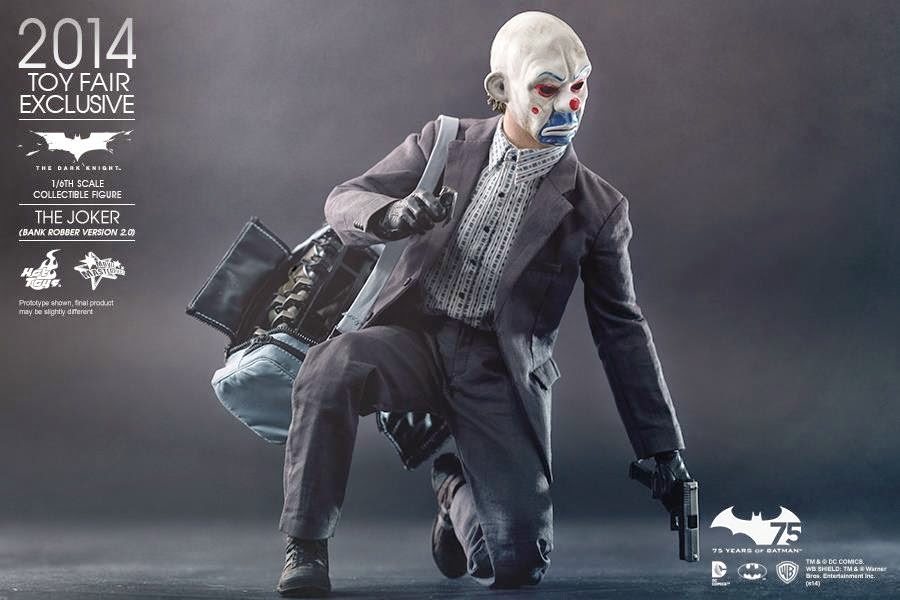 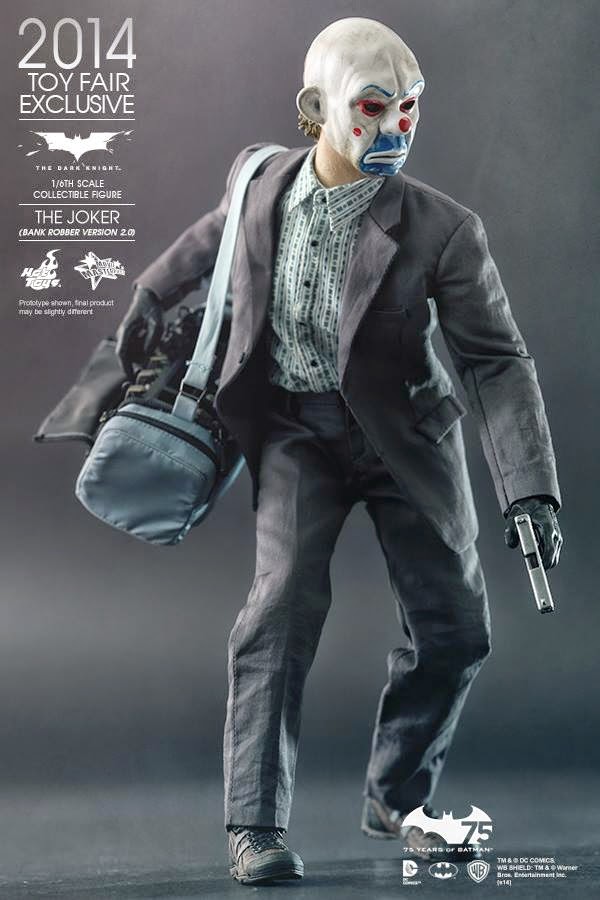 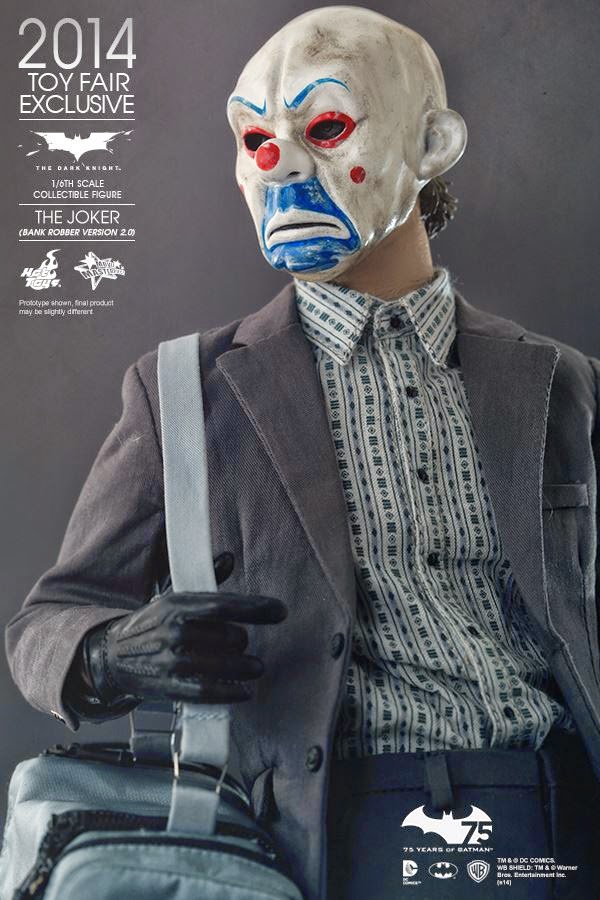 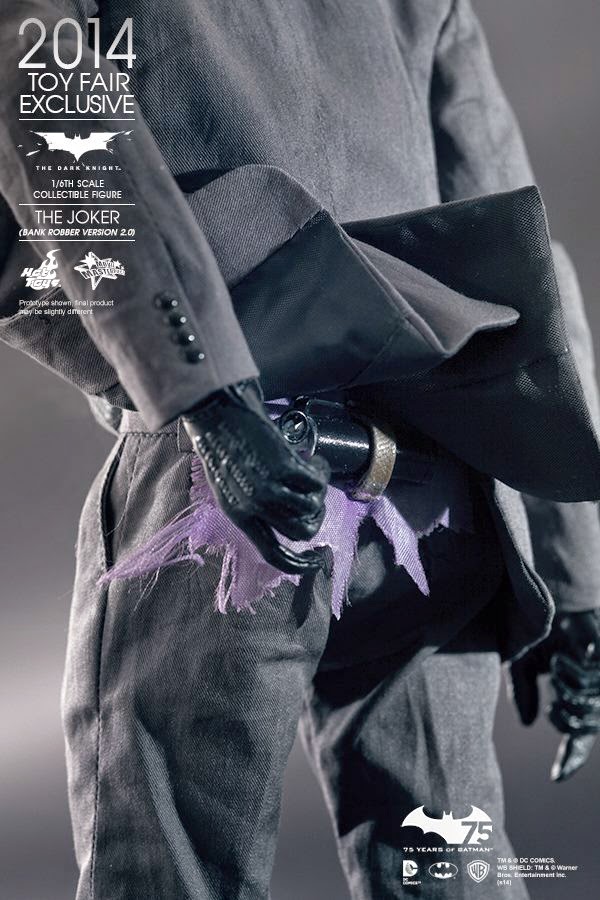 Unlike the first version of Bank Robber Joker, the mask isn't removable this time, it's a whole alternate head. Aside from that, he has over 30 points of articulation, eight pieces of interchangeable hands, pistol, shotgun, switchblade, four smoke grenades, six grenades and six round grenades, duffle bag, stack of Joker cards, stack of money, and a diamond shaped figure stand with The Joker Nameplate, movie logo, and bank heist school bus backdrop. This is also one of Hot Toys' upcoming Toy Fair Exclusives, which means that it's more than likely very limited in quantity. But, don't fret because if you miss it, they're bound to do a 3rd version and who knows from there...excuse me while I yawn.

Honestly, I know I may come off as a snob, but I also know that there's many collectors out there who feel the same way as I do when I say that I don't care if anyone missed the first version. Too little, too late. Sorry about your luck. I've got an almost full collection of characters, and finishing that is postponed so Hot Toys can help the newbies play catch up? That's BS to me, and while it may be a great looking figure, it isn't a vast improvement overall.

If you ask me, there is no reason this figure should be made. If you're new to the game, go search Ebay like everyone else, because those of us who've been collecting this line since back in 2008 are sick of having our needs pushed back because of people who got into the game later on. Quoting Peter Parker from Spider-Man, "I missed the part where that's my problem".

Although this is most likely a purchase for me (just because I want variations), I'm not very happy about it. At the end of the day, it'll look amazing in any collection, but there's more important things yet to be made. The release date on this guy is the 3rd or 4th quarter of this year. Meaning, it can come out anywhere between July and December. Get your wallets ready, because I'm sure the price tag is going to sting.

Sideshow Collectibles posts all the latest news and pre-orders every Thursday, so be sure to check in and stay updated HERE.
Posted by Drew Grimm Van Ess at 6:37 AM