'DEEP IN THE DARKNESS' will give you the creeps

Deep in the Darkness is directed by Colin Theys (Remains), and stars Dean Stockwell (Battlestar Galactica 2006-2009), Sean Patrick Thomas (Halloween: Resurrection), Blanche Baker (Sixteen Candles), and Kristen Bush (Blue Bloods). It's a lot creepier than I expected, not since The Woman (2011) have feral humans been so disconcerted to watch. Dr. Michael Cayle (Sean Patrick Thomas) and his pregnant wife Cristine (Kirsten Bush) move from New York to a small town called Ashborough where he picks up his medical practice in the hopes of bringing his family closer. However, their neighbors are mysterious and suspicious to say the very least, and they have a grave secret pertaining to the eerie creatures who live in the woods, which are in Michael and Cristine's back yard.

The characters set up a distressing atmosphere, especially the neighbors who are polite, but aren't modest about their sketchiness and are terrible at hiding that they have secrets. Most notably, when Michael and Cristina have lunch with Phil (Dead Stockwell) and have a run-in with his disfigured wife, which should have been Michael's warning to get the hell out of dodge. Not to mention that everyone in the small town sacrifices animals to appease the creatures living in the woods. Phil tries to pursue Michael into making a sacrifice, but Michael won't heed the warning, and thinks they're all crazy. The worst part of it for Michael, is that his wife actually gets along with the neighbors, most particularly the Midwife, Zellis (Blanche Baker), who is a strong character and very deceptive. The acting for the most part is satisfying, but it's decent at best. Everyone gives good performances, but no one gives a great one. 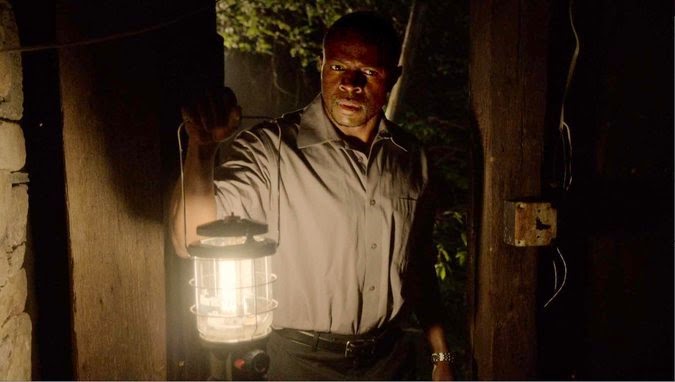 The "Wildmen" and women in the woods who come out at night are doubtlessly wicked looking. The makeup looks simple, but that's just because they're very dirty and disheveled looking. They definitely look wild so to speak, but their yellow eyes add a touch of edginess to their appearance. They invade Michael and Cristina's home with such ease that it makes you question how safe anyone is in their own house. These things crawl down his chimney, and even pop up from under the floor. They make nightly visits that go ignored or unseen for a short bit. I'm certain that after watching this that some viewers will check their windows and doors and make sure they're secured safely. The movements and the noises the primal creatures make are really what stands out about them because through their motions and hisses and groans, they're shaped up to be what they're built up as, and it's almost scary. So the actors and actresses did their jobs well, for the better part.

What I like about the plot is that it's well paced. It's never too slow, and progresses forward with more story and character depth. The score is a key factor in the pace working so well, because it adds that flare of suspense needed to keep the viewer on their toes. Another thing that adds to the pace and suspense, is finding out that the forest creatures live under the ground and can hear everything you say. They're always listening, and won't allow you to leave by any means necessary. Boarding up your doors and windows doesn't even protect you from being eavesdropped on, or your home from being intruded. What I felt lessened the overall effect the movie potentially had, was that the creatures aren't savage enough when it comes to combat. Sure, they're kinda scary when they're growling and acting menacing, but when it comes down to battle, they're reserved and hold back. I was expecting throats to get ripped out by their long unkempt fingernails, and other things of violently graphic nature. Instead, they're pretty easy to ward off. Where they have the advantage is in their numbers and ability to surround their prey. And I never felt a sense of true urgency from Michael or Cristina. They're portrayed to be scared, but instead are somewhat stiff in delivering the goods of believability.

The best way to describe this one is to say that I would recommend it to anyone who has the ability to watch it from their couch or La-Z-Boy, but not to anyone who would have to pay to see it. It's not worth the price of ticket admission, because the payoff/ending is weak and I was unphased by it, but it's a good movie to catch on TV while you're at home doing nothing productive. It's got a good plot, some good thrills, it's creepy, has good characters, the "Wildmen" are a sight for sore eyes, but the acting suffers and is followed up with a dud of an ending.