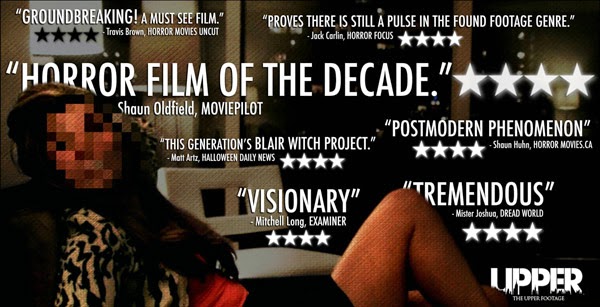 Synopsis taken from IMDb
'THE UPPER FOOTAGE' is the first film experience of its kind. The film is an edited version of 393 minutes of recovered footage documenting a young girl's tragic overdose death and subsequent cover up by a group of affluent socialites. What started as a blackmail plot played out over YouTube, became Hollywood's biggest drug scandal, turned into a heavily controversial film property that was rumored to be held by some of the biggest names in Hollywood. Now, after playing itself out in the media for 3 years it is finally making its way to the public.

First of all, I have to mention that I cannot believe that I saw someone online say that this is "One of the greatest movies I've ever seen". I don't know, maybe some people like myself just have higher standards in terms of what constitutes as a great movie. That quote is even more ludicrous than the actual movie.

It starts with a lot of summed up footage, showing news reels and clips, interviews, and radio show hosts talking about this mysterious girl doing copious amounts of cocaine on these YouTube clips that leaked online a few years ago. Some rumors even started flying around that it was celebrities. Then there's the name drop of Quentin Tarantino, and his involvement in buying the rights to the video clips, with intent on making a motion picture about them after the girl in the videos, Jackie Spearo, died in a tragic way. Tarantino eventually backed out of using the YouTube videos to make the movie. I hate to burst anyone's bubble, but this whole movie and the controversy behind it is completely a marketing campaign only. There's no truth to it, it's a veil pulled over the viewers eyes to build a fake sense of dread.
If you have to trick audiences into liking your movie, that's a false achievement in my book. The feature film will tell you that the videos were uploaded to YouTube as a bribe, and blackmail. When actually, the truth is, the uploads were to cause confusion and start rumors in social media. Having several female celebrities falsely accused of being the faceless woman in the clips, it added mystery and had people wanting answers. The stir it all caused in the media was used to build hype behind The Upper Footage, and make it seem authentic. While it is undoubtedly a rude and aggressive marketing strategy, it worked because moviegoers and people who follow social media outlets actually think it's a true life incident. 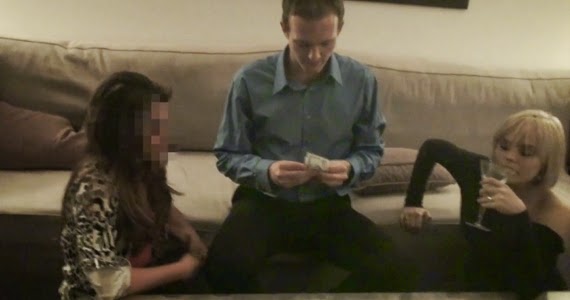 It's the same exact type of hype that happened when The Blair Witch Project came out, and everyone really thought the actors and actress involved were really dead. What baffles me, is regardless of how real or unreal it is, people really believed they were watching a movie about a dead girl and her last night alive. There's no way this would be released to the public as a motion picture if this were in fact a true event. Some people just aren't as naive as others may think, and can see through a bad lie when they see and/or hear it. This movie ruined people's lives, really?
Although I knew the falsity behind the making of The Upper Footage, and despite the fact that it's yet another found footage film, I still gave it a shot. To be quite frank, I was bored for about 75 minutes of the 87 minute run time. It's just a group of rich, racist snobs partying in a limo and and being about as crude and impolite as imaginable. After 25 minutes of nonsense dialogue and the search for a plot, Jackie enters the movie via her date, and her face is pixelated the entire film. The party goes from the limo, to a high-scale apartment, and from there, we get a lot of loud talking/shouting, people acting as annoying as possible, and a ton of drug use. It's the kind of movie where without pausing it, you can get up and get a bite to eat and a drink, pet your cat, check your mail, check your email, and use the bathroom without missing anything of mere close importance.
After throwing up profusely, Jackie kicks the bucket. And what do the guys at this party do? They decide to drive her body around for a good thirty minutes (at least it feels as though it were a half hour), all the while recording everything including too much arguing, and whining, and moaning. I gave this flick a fair chance, but any and all entertainment value is lost on me because, I was not amused. I wouldn't think that someone's tragic death and the need to cover the incident up should be so loud ad boring.
Then, we get to watch the lead male characters dig a hole for eternity. Most of which is in silence, giving you plenty of time to send a text or check your email again. 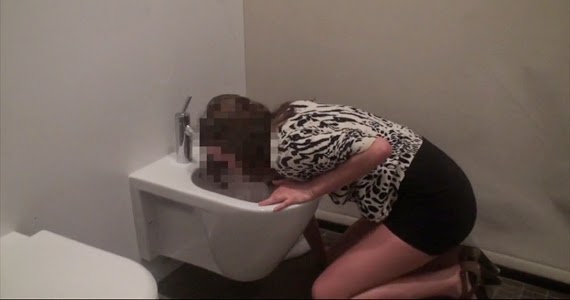 I'd rather attend a tax seminar than watch this ever again. I don't believe in the hype behind it, and it fails to entertain on almost every level. That is of course, unless your idea of a good movie entails nothingness for 75 minutes, and maybe 10 minutes of watchable footage.