'LOCKE' is a drive you won't forget 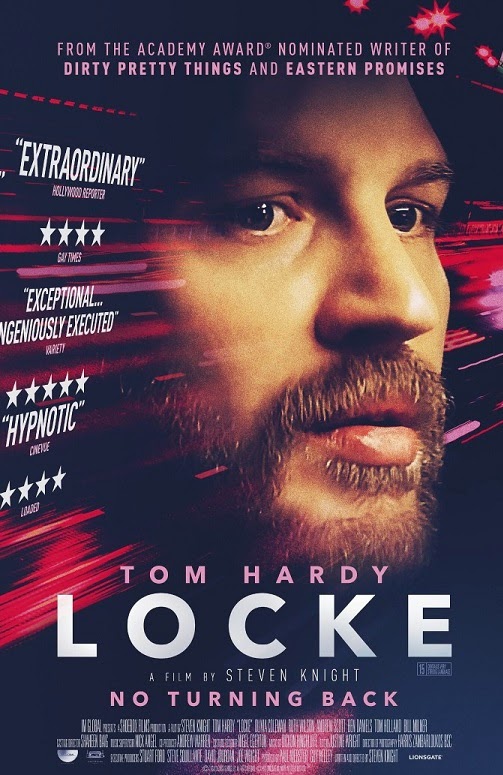 Synopsis taken from IMDb
Ivan Locke, a dedicated family man and successful construction manager, receives a phone call on the eve of the biggest challenge of his career that sets in motion a series of events that threaten his careful cultivated existence.

If there's one thing that we can trust, it's that Tom Hardy carries motion pictures on his shoulders with incredible ease. After his masterful performance in Bronson, Hardy has been on a tear of good movies, all with memorable performances including Inception,The Dark Knight Rises, and now Locke.


In the same fashion as 2002's Phone Booth, the whole film is set in one location and focuses on one man and the situation he's in, how he's reacting, and how he gets out of it. It starts off slow and strong as we follow Ivan (Hardy) as he's in his car driving for what seems to be an eternity. You can instantly see that he's stressed out and that all isn't well.

As it progresses, we see Ivan make a ton of phone calls, all of which are about family and his work as a construction manager. We find out that although there's a career making (or breaking) deal going on at his work that he is much needed for, he's leaving it in the hands of less capable people, because he's on his way to witness the birth of his son. Ivan calls his wife, Katrina (Ruth Wilson) and explains to her that he won't be home for a while because of his son's birth. He goes on to explain that he had an affair with a co-worker named Bethan (Olivia Colman) several months ago. He tells Katrina that he was going to tell her about it once he got the courage, but he hadn't expected Bethan to go into premature labour.

With calls from Bethan and nurses at the hospital coming in, hateful calls from his workplace, and dreaded conversation with his now upset and betrayed wife, we watch as Locke tries to fit all the pieces into play and make everything work out, despite how overwhelmed he is. There's a bit of a breakdown scene by Hardy earlier on, but he's surprisingly relaxed the rest of the film, even though he's under incredible pressure. What his performance needed was a major breakdown scene. If there were some crying and real anger and aggression, this would have been his best performance.

With nothing going his way, and things seemingly getting worse at work and home, it appears as though the birth of his new son is the best news in his life. Although his wife tells him never to come home again, the light at the end of the tunnel is the news that his son was born safely. After finding out that Ivan was abandoned by his real father as a child, we see why  it's so important for Ivan to take a part of his child's life. He didn't meet his real father until his early twenties, and doesn't want the same life for his newborn.

In the end, although it was an affair the child is born from, to me, the purpose of the story was to show how important human life is and that no matter what the circumstances of a birth are, children and life are a blessing and better than any bad news that can come at you. It's a touching and gripping story that's beautifully played out and acted. It's only about an hour and 25 minutes, so it's an easy watch. When I viewed it, you could hear a pin drop due to how compelled I was. It's very intense, and character-based.

Locke is a true gem of modern cinema. It's a hell of a lot better than the aforementioned Phone Booth, and it's an immediate Blu-ray purchase for me. Hardy keeps your eyes glued to the screen, and the story keeps you on your toes. It's an all-around very well done achievement. I loved it!